SCHS Greenhouse Build
I finally got everything installed- such as a bunch of temperature sensors, and a raspberry pi mini computer that monitors the temperature and controls when the fan comes on.

And so i have pretty graphs! 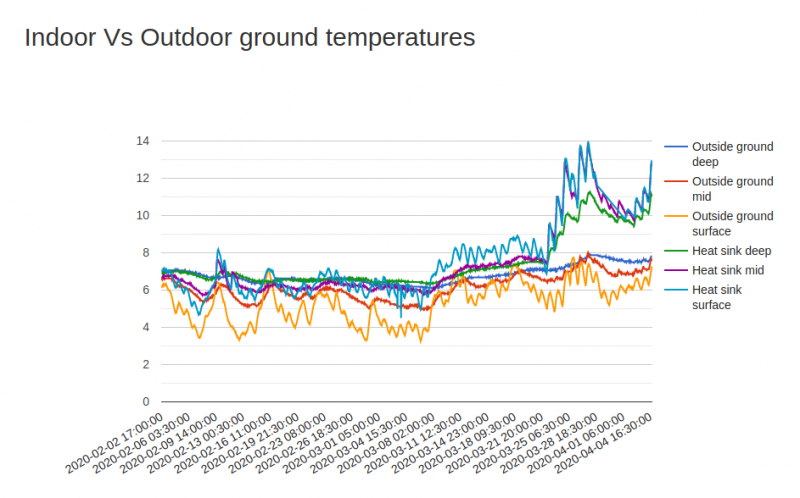 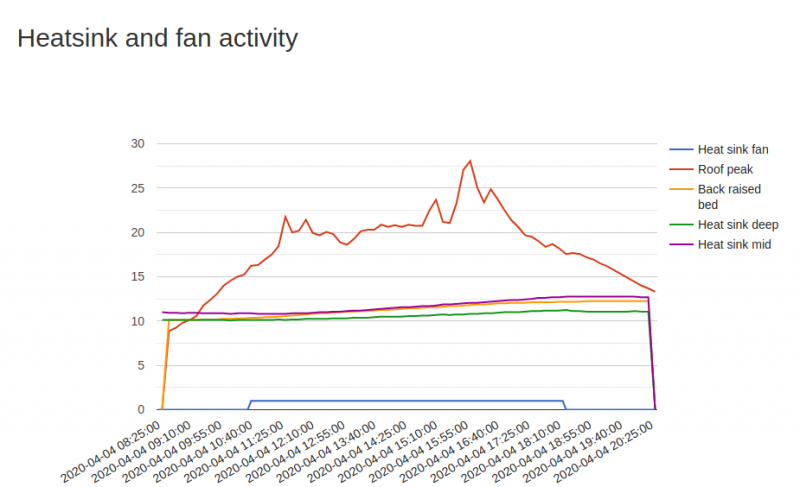 The little blue line at the bottom of the graph is when the fan comes on, it shows that this does indeed heat the mass up! 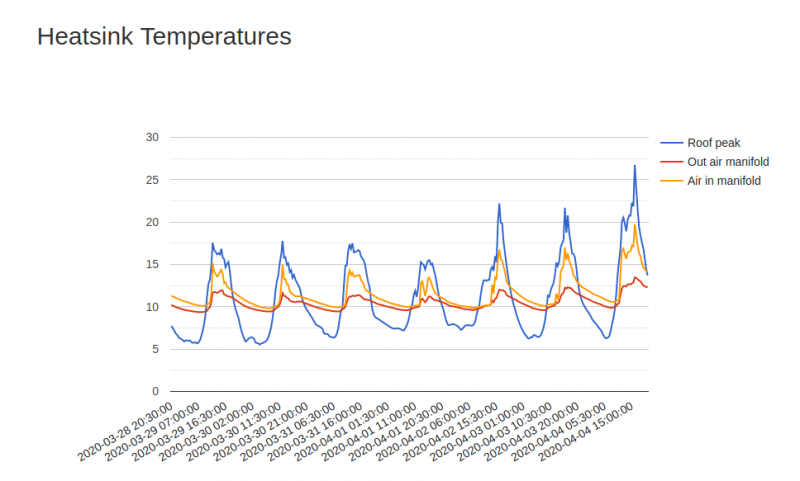 The air putput is on average 3C cooler than the input, with the highest difference being 6C-its transferring plenty of heat to the mass

I'm continually amazed that something I built works!
show more
20 hours ago
greenhouses
What have we learned since last year?
Don't ignore spidermites! Their population seems to be able to triple in a day, and they do kill things!
show more
2 weeks ago
gardening for beginners 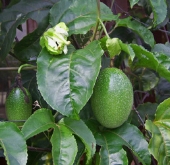 passion fruit vs passion flower?
I'm in the UK, and the passionflower I have (and see commonly in stores) is Passiflora Edulis. It does attempt to grow fruit- but they've never grown very large or ripened so I'm not sure what they would become.
show more
3 weeks ago
plants
High blood pressure
I think I'm mostly annoyed that the doctor can only give me generic advice (and obviously didn't listen to my answers). Like to give up caffeine- when I don't drink tea, coffee or soda! Or to do more exercise- well I can't fit more than 10 hours a week in and still make it to work! I wouldn't say I'm super fit, but I cycle a few hundred miles a month, and run another hundred so I'm not exactly a couch potato. I've got some hibiscus and will be trying it in tea, once I've got some 'baseline numbers'.
show more
1 month ago
food as medicine
High blood pressure
I've now got an upper-arm monitor- its what the doctors use so  I figured it would then match! I figure I shall write a food diary for a week, as well as taking blood pressure readings morning and evening- see if I can find any correlations.

I don't think stress is an issue.. I'm pretty laid back. Having said that- I do a lot, I have something planned for every evening! Am I creating my own internal stress? I'm on holiday from work for the next week so this might help me tell!
show more
1 month ago
food as medicine
High blood pressure

Tommy Wilder wrote:Be your own doctor: buy a bloodpressure meter (not the wrist version, very often incorrect readings), the upper-arm version. They are quite cheap.
Measure your pressure (pref. in the morning when it's highest) and record this in a journal. Maybe in the 1st couple of weeks, measure several times/day.
It helped me a lot. Going into the 105-170 area, left the working-in-shift job, and now in the 80-120 region (now almost 60 yrs old).
most interesting discovery, for me, was to find out that after eating too much sweets (read; sugars,bread etc.) my bloodpressure would increase AFTER 24 HOURS.... so a kind of killer-delay.
So, write in your journal what you eat and soon you will find the offending food

I have ordered a blood pressure meter! It should arrive in a few days- I didn't realise how cheap they were- even clinically-approved ones.
show more
1 month ago
food as medicine 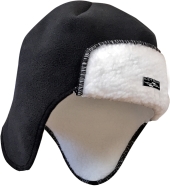 Japanese Knotweed more effective than antibiotics for Lyme disease
I have it (knotweed, not lyme disease) in my garden in Derbyshire (UK), and it was an uphill battle to get the mortgage (but I did get one).

My garden and community garden are both on old coal mines- its what all the land around here is! I live betwewn two industrial estates-the trucks can be annoying but it is lovely and quite at weekends when the factories are closed (in the week I work on one of those same industrial estates).
show more
1 month ago
homestead
High blood pressure
So the docs have decided I have high blood pressure- its been the same for the past decade but suddenly it is apparently a problem!

I'm 33, female, 74kg (so a bit overweight but not by much), do 6-10 hours of purposeful exercise a week (I compete in triathlons), don't drink caffeine (only fruit tea), drink moderate alcohol (maybe 4 * 500ml bottles of hard cider a week), eat a reasonable diet (as in almost everything is home-cooked, no added salt, no ready-meals, hardly ever eat out, eats laods of home-grown fruit, veg and eggs). I do intermittent fasting twice a week- one 24 hour and one 16 hour.

What else can I try? I'm not really bothered (as in I have no symptoms of high blood pressure other than the measurements), but I need to get it low enough that the doctors will leave me alone for another year (and refill my contraceptive pill prescription!).
show more
1 month ago
food as medicine