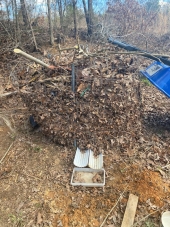 Looks like you've got your work cut out for you but I'm guessing that it brings you joy.
I'm fairly new to the biochar party but several of the things you mention scream biochar as an answer.
I am going to be using it to raise ph, break up clay and water and nutrient retention.
I understand not wanting to add another thing to the ten things you're already doing.
But if you decide to you'll be able to get rid of the wild rose and broomsedge - with FIRE! and get something useful out of it.

Good luck either way.  I'll be following your progress.
Keith 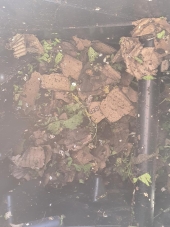 My thoughts only.  I would continue to fill (yes to coffee grounds and filters) and turn your tumbler until you get it 1/2 to 2/3rds full.
Then wet it well, stop adding to it and turn it every few days until you get compost that is finished to your liking.

Hopefully, you have another spot to put your composting materials while you are waiting on your tumbler contents to finish.

first char today
I'm very pleased.  2+ gallons of good char.  Uniform char from top to bottom.  Little or no ash.
I'll be adding the bio and the crushing in the next couple of weeks.
My pot was weakened but still useable.
And I will get a flame-proof cover before I do this again Friday or Saturday - maybe both.

That is a quarter for reference.
show more
2 months ago
biochar

first char today
Thank you both for your comments.  I've been obsessing about this for over a week and I figured out how to "try this at home" with $0 input.

If the unveiling goes as well as I think it will, I will invest in some upgrades to improve the process.

Quenching the fire was done a quart at a time until the steam stopped rolling off the char.

I was looking for proof of concept vs. grade A char with this trial - I just needed to burn something.

Because the decision to burn yesterday happened fairly quickly, that meant I didn't have a non-flammable lid for the stopping the burn - I looked.

I'm pretty sure that the pot is history.  I heard several loud pops during the burn.  It was curb salvaged several years ago and I finally put it to good use.

I am probably going to go with the double stock pot TLUD build in the near future.  It fits my neighborhood and storage options better.

Anybody else tried that one?  Also thought about the wok shaped fire pits as a cheap/easy option.

I'll try to get pictures up tonight with my success or failure.

It took about an hour and I probably burned 10 gallons of maple sticks and 2 gallons of sweet gum balls.
I think my production can double and reduce my time by about 20 minutes for the next burn.
This is my new obsession.  I'm pretty sure it's going to be a good one.
show more
2 months ago
biochar
What should not go into compost?
I don't do meat, dairy, dog manure (only pet I have) or shiny paper.  All other stuff goes in.  If a little meat, dairy or shiny paper gets in, I don't sweat it.
Mother Earth News has several good articles on how to set up a bin/pile/tumbler/system and what to put in it.
What you are composting in, how much you are going to manage it and what critters will visit is just as important.
If possums, raccoons, rats or canines are not an issue - then meat/fish could be composted as well.
Good luck.
show more
3 months ago
composting
Canada Thistle
Doug - thanks.  Until somebody recreates it, it is just a cool story.  Hopefully, you or Leora or

can try it and be successful.
Good luck all.
show more
6 months ago
plants
Canada Thistle
We had 1-acre out of a 10-acre restorative prairie in Central Indiana - sizes are guesses.  We had very old thistle -flowering and fluffy - but it wasn't mature.  In fact it was very naughty.
We were using wood chips and compost to improve the soil, hoes, sickles and weedwhackers to fight the weeds and only tilled/mowed lightly.
We talked with the prairie experts who said chemicals, lots and lots of chemicals.  But we were a no chemical community garden.
Two large plots were completely overrun and that is where we mowed low and double-tarped for a year.  We still had runners reaching for the sun.
We started using cover crops on the active plots in the fall and noticed a lot less thistle pressure throughout.
Somebody suggested using them (buckwheat and peas) the next spring on some fallow, weed-infested plots.
Picture knee-high, lawn thickness weeds - no bare patches to start with.
It looked like somebody put thistle in our spreader instead of alfalfa.
By the time the buckwheat flowered, most of the thistle was gone.
At this point we had a thistle or other unwanted weed every ten feet or so but we were amazed at the difference.

This was a one-off experiment and we never did plant the main area.  It was our seventh year and it seems like most non-profits get the 7-year itch.

If my memory serves (and it might not) we sowed about twice the recommended amount.
Partly because we hated the thistle but also because that is what we had leftover from fall.
I don't think we had any inoculate (?) for the peas either.

Again, this was several years ago and I am recalling the best I can.  I do know that I hate thistle and the buckwheat/pea mix almost eliminated it in one season.