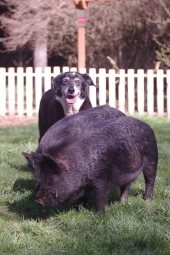 American Guinea Hog forage and such
As interesting as that is to picture, I don't think I could do that to them unless they were already butchered! But look on guineahog.org it's the american guinea hog rare breed whatever site, you can post a want ad for your area and they have a breeders database. Good luck!
show more
8 years ago
pigs

American Guinea Hog forage and such
We raise AGH here in Wisconsin, they do awesome on rotational grazing. I'm a small person so it's nice to have such a manageable breed--used to work with Berkshires, and those can great pretty huge. I keep hearing from people that it's harder to breed them when they're obese, but I haven't had a problem with that, actually we just had an obese sow farrow last week very successfully. We do have them fenced with electric, because otherwise there's no way to keep the rotational grazing to a schedule where the crops can grow. But the electric works really well--actually we have to coax them to cross the old boundaries with snacks before they'll believe us! The meat is delicious, they're easy to butcher, and you really don't have to feed them much because they forage so well. The lard is really top-notch too, and if you can't find enough soap-maker to buy it, try local bakeries, because it really is high quality. They're also just kind tempered animals. The only bad thing we've had happen is that one of the boars is a chicken killer and we haven't figured out what to do about that. Otherwise we're really happy with these guys.

To the person whose piglets are getting out through the panels, we lean pallets up in our maternity ward to keep this from happening, it works well.

We feed more than danielle grower does--might just be a colder climate, I'm not sure, but we feed the lactating sows about 2 scoops of corn/soy/alfalfa daily, plus free eating on a bale, plus tons of produce scraps. Everybody else gets about 1 scoop of mix and the goodies. You do have to be careful not to overfeed them because once they farrow they can really lose weight in a bad way, you want them heavy when you breed them for their own health when nursing.

We've got a bunch of feeders, gilts, a boar, and maybe a sow we'd like to sell or trade, if anyone's interested in trying them out. Our girls did really good this summer with litter size and now we're like...holy pigs!
show more
8 years ago
pigs