the first month
Is it possible to rent out excavators for an extended period? It sounds like a lot of camping and excavation work in year one, which sounds sooooo good! 200 acres??? Oh my...

after hearing about Sepp's complaints in Montana about the water rights, are you confident?

200 acres?! So amazing..cant wait to see it evolve
show more
8 years ago
wheaton laboratories
Sepp Holzer - US Tour - Spring 2013 - Workshops and Certification Program
I agree on many points. It was a treat beyond belief to be able to simply ask him about things...and he would look you right in the eyes as he spoke - knowing how much he has done and how wise he is, it was really such a great opportunity to ask him things directly.

I think the austria trip is fairly priced, the food there would be unbeatable, plus the inside access to all the good things happening there. I am sure many people will go.

I realize that he may very well not come back to the US for a long while if ever again, so it was really a once in a lifetime chance...and to have the books signed by him! and a photo..with one of your heroes - what a treat. Austria will be amazing for sure though.

Were any hugelbeds built in Montana? Or hi beds with terraces? Its really too bad about the frozen ground and road restrictions at the duluth event.

show more
8 years ago
sepp holzer
Sepp Holzer - US Tour - Spring 2013 - Workshops and Certification Program
Who is considering a trip to Austria in august? Im also wondering how people felts about the lack of earthworks...I really thought part of our fee was going to pay for excavators?

I appreciate all involved in the event, I just thought it would be fair to at least bring that topic up since no one else seems to want to. I do plan to go to Austria, because the 5 day "intensive" was...not so intense as everyone there could easily agree.
We know the daily cost for workshops like that, and although Im ELATED to have a picture with Sepp and to see him in person and have my books signed, but I dont know how others felt about the apparent lack of planning.

Again, all respect due, just putting some questions out there.
Sepp left before lunch on Day 4 in duluth, which was weird, but Zach saved it with a great greenhouse presentation and the guys did a fun bone sauce demo.
He left to do another consultation...while everyone was there? Couldnt that have happened after everyone left or whenever people arent paying $200 a day to be with him??

But for that price...something needs to be tweaked - I know that they were at the mercy of Sepp's schedule, and mother nature in Minnesota was a cold one while he was there. But with all those people paying serious money to be there...

So much appreciation for those involved, I know its not easy to host 30-40 people on the land at once...good luck with all the permits and redtape nonsense too...I know that these will get better each time they occur.

I just wonder about the excavators...all that money people spent thinking there would be big projects happening...and no mention of a partial refund? Fair share? I heard about Sepp's daily rate, but still.

Not trying to make enemies here, but lets be real - with that letdown the books could at least have been given as an apology...instead of $30 each. It would have been funny if people would have started asking for refunds right there on the first day lol..but I think everyone wanted to still be there and visit with all the other attendees.

Would I tell other people to attend? at this point no...sadly. I would be so happy to say yes, but I would recommend Ben Falk's place instead for real direct experiences in a magical setting. With real earthworks happening. I felt pretty ripped off honestly...happy, soooo happy to meet sepp in person, but some kind of partial refund should have been offered. Sepp didnt even show us his personal plan for the duluth property.

Paul Im just wondering what you thought of the Bozeman event? Anyone? Just trying to be real here about things.

Paul Wheaton's hugelkultur article thread
Thanks everyone for sharing all this - here are my new beds for the year - I would like to go high enough to really break the wind coming in from behind the beds - I'm using poplar and ironwood (horn hopbeam) which coppices. This area was logged about 50 years ago and is now a poplar, oak, ironwood, and birch mix. I wonder if Im using too much wood though for these...
show more
8 years ago
hugelkultur

Snorkel hot tub in greenhouse for a possible conversion to a RMH?
http://snorkel.com/hot-tub-info/snorkel-and-scuba-stoves.php this is the design of the stove - its an aluminum stove to prevent rust - aluminum tea water isnt very cool

I just realized it was aluminum by looking on their site.
show more
8 years ago
rocket stoves

Snorkel hot tub in greenhouse for a possible conversion to a RMH?
I buried this snorkel 1/2 way down in a 22' dome greenhouse. Its at the low point and all the cold air goes down there. Usually its empty, and so far the "ambiance" in the greenhouse hasnt been up to par for a good hot tub dip. Plus the chimney leaked and I wasnt around much in the winter when it would have been useful. I did this back in 2008, and probably didnt know about RMHs until 4 months ago?

So Im thinking that maybe a barrel would replace that junky rusty (very humid in there and it would just rust within months) chimney and then we could wrap the circumference with the exit pipe? I have the Ianto book but no experience. I am surely cool with waiting for late spring. As far as the upper wall above the hot tub, its like a reflective soft 1/2'' padding. It would melt if the heat was close enough. If we used a small one and then put more protection above just in case?

Or I was thinking I could take the whole thing out and put in a real RMH and have that like a lower sitting hangout spot with the trees starting 4' above. Ideally I think a circular stone/cement tub with a waterproof RMH built in would be so ideal...with a big cob mass against that back wall?

I was envisioning running the exhaust pipe around the front and then back again and covering it all with pebbles up to the first metal ring so our feet would be level with the water as we walk up, with the pipe underneath us giving off heat - YES the pebbles are porous enough that the cold air can still sink into the low spot in the winter. At -25F outside the lowest ive seen in there is +15F. I have two persimmons (chocolate and hachiya, a date plum, goumis (2 and putting more in for sure now) comfrey, fuzzy kiwi, grapes, and some annuals across the inner front in warm months. Im not there in the winter and no one waters in until March when the green starts showing up (about 2 months before outside)...I envision the 42' greenhouses with swimming ponds and cottages inside.

I think the RMH is just perfect for these - and connecting it to the snorkel which I already have (cool concept but losing so much heat still they way they designed it...and it was always envisioned for outside use - until the RMH?
show more
8 years ago
rocket stoves
dwarf/hybrid hazelnuts?
Im really happy with the ones that I bought from St Lawrence - some are almost 7 feet tall after being planted in april 2011. Make sure they are hardy enough - St lawrence works really well for colder spots obviously. Enjoy and pick them a little green so the animals dont beat you to it.
show more
8 years ago
trees 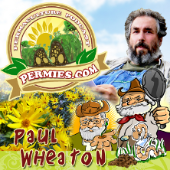 Podcast 237 - Sepp Holzer's Permaculture Chapter 6
Great podcast - the last half listening about the events in the US was great. Thanks Paul!
show more
8 years ago
paul wheaton's permaculture podcasts

Seaberries (Sea Buckthorn) in the Pacific NW?
I would call the people at One Green World in Oregon - they have customers with tons of experience with these Im sure. Ben Falk at Whole Design Systems in Burlington VT says Sea Buckthorn is one of the best plants on his property and is continually growing more. Ive planted about 30 here in Minnesota and most are doing great - so pooped out though