If anyone is serious about diving into mowing with a scythe this is going to be one of the best opportunities to do so in ages.

There will be specialists present in both American and Continental Euro patterns doing presentations, and there will be an array of scythes available for people to try, including more than two dozen from my own collection; some of the best examples of American patterns I have available to me, old stock European blades on wildwood snaths, and even a Nordic pattern scythe. A greater diversity of scythes for those interested in scythe possibilities than you are like to find anywhere else, period.

Please consider attending if you are interested in learning/experiencing (much) more about scythes.

SWM 26, New England, Seeking Whatever
This is one such palatable end that certain of those once-verdant leaves met. Mortar and pestle ground, sieved, alkalized and salted, lightly sauced with menthol crystals suspended in vodka solution plus bergamot and camphor EOs. Comparable enough to snuff imported from Europe that I no longer see that need!

A glimpse into my strange doings!
show more
1 year ago
permaculture singles

SWM 26, New England, Seeking Whatever
Reaffirmed that I hate traveling....

Retooling spring/summer plans included getting around to growing beautiful tobacco plants for the first time since I was a teen and processing it into altogether really quite palatable mind and soul food!

As if my standing in the arena of finding astral love could plummet further or be stinkier! Wooooo
show more
1 year ago
permaculture singles
A Community For Happy Recluses?
Probably basing something off of the extended community/neighbor dynamic would be a good fit. This would also be as important work as any of the more self-aggrandizing, suffocating eco-villages with super high turnover. Not that we can't learn things from those too. But learning how to build extensive community translates much more broadly to a greater number of peoples' sensibilities and capabilities.

I sort of hate the term "ambivert" but I'm relenting a bit because it does somewhat describe me. I need my own space to self medicate solitude with, but I also need to be able to merge into some interaction on a minimally-expectational basis pretty much whenever I want. Good neighbors and a good local watering hole would probably suffice, but I sort of want that on steroids.

Important topic!
show more
1 year ago
intentional community
VT/NH Borderlands Short Term Place To Stay -- Skill Exchange?
Would anyone in the area be interested in an exchange based on teaching hand tool skills (specifically; scythes {American, Euro, Nordic}, axe work, crosscut saw filing, green woodworking) in return for being put up a short/medium duration so I can explore property options and community in the area?

What "short/medium term" actually means would be fleshed out, along with specifics over skill exchange -- I have many specifics in mind, but I'd want to know what might actually be more useful and less novelty for your specific circumstances and systems. Beyond the "skill" aspects I would furnish some tools, set up some tool infrastructure (peening a scythe blade without a good anvil set up, or trying to file a saw without a passable vice is not much fun), and hopefully accompany junktiquing to show what to look for in intercepting heirloom tools from the waste stream (a skill itself, plus reclaiming very neglected tools is probably the best way to develop high level maintenance skills too).

My only current geographic qualifiers are based around my focus on properties on the VT side of the border within about 15 miles of NH, basically for self-imposed poverty style geo-arbitrage reasons. So more of an east-west location criteria than a north/south one.

Feel free to send me a message or provide an email that I can write to if there is any interest. I'd be happy to provide a certain amount of "background" which for brevity I will leave out here.
show more
1 year ago
new england

Just responding to say that I hope you are keeping some type of journal of all your adventures. You clearly have the gift of written words (among others); someday you may want to put them into a book format!
Best of luck to you! (I am in a happy union and not the right age anyway, but wanted to remark on your talent(s).)

Thank you! I do keep something resembling a journal, although I'm not sure anyone else would recognize it as one!
show more
2 years ago
permaculture singles

I'm 26, looking to connect primarily via writing (for now) and make friends and connections, especially regionally across the more northern parts of NE.

I don't feel particularly inclined to post relationship dictums/deal breakers. Not that that's not on my radar (it is), but before all else I would simply like to make individual connections and seek further as an extension of that, as intuition might allow. My feet for relationship aren't cold, per se, but a bit tepid.

I was "unschooled" (I prefer the less loaded descriptor "spared formal education"), have lived on various off grid farms/ projects for periods ranging from 10 days to a year and a half. I deeply desired to set root as early in life as I could but haven't quite achieved that yet (probably for the best). Currently in an exploratory phase trying to figure out where I want to be in (most likely) NE. Learning to appreciate no debt or substantial weighing-down factors.

I developed connections with a lot of "old guard" hippies around Maine and New Brunswick and for the longest time eschewed the younger crowd out of reclusive habits and lack of social energy. Now I kind of want to interact with less grumpy old bastard sorts. Drawn more to the earnest and unaffected, ideologically ambiguous, and those skeptical of cliques, sub-cultures and group think.

Interests begin with hand tool labor and green woodworking which I have found engrossing for some 14 years on a "full time" basis. Axes, scythes, and especially self made handles for each are long standing interests. I love old elegant hay rakes and forks and have very pleasant memories being involved in by-hand hay production. Human powered earth working tools are fun. I am a dilettante crosscut saw filer/interceptor from the waste stream. I lived in Aroostook county for about a year and a half and heated/cooked with wood and have never used a chainsaw, so I can make hand saws "go". I also converted my hosts to crosscut saws and they haven't used a chainsaw since, as far as I know. I would view being eventually settling into a life where I can use these tools to produce most of my more "material" sustenance both as a great privilege and pleasure.

), like to dabble in gardening and permaculture systems, scratch cooking, a bit of music and lo-fi recording. I think Ringo is the best Beatle.

I am a very friendly and jovial cynic, with no depressive tendencies but plenty of neurotic/creative force and angst, interpersonal dynamics are an interesting muse to me and I have lived in and reflected upon many very dysfunctional living arrangements. Politically/ideologically/socialogically scrambled, so I've learned to exist in "at-odds-ness" with people and (mostly) enjoy it. Earnest and, at times, awkward and prone to social exhaustion. I possess a sense of humor that the excessively formal may find "affronting", that is very dear to me. I try to sneak it into things like vegetables into picky kids' foods.

Anyway, I'd be happy to connect, so send me a message sometime. Prone to the written form of verbal diarrhea so I will pinch this one off here. 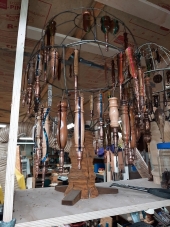 Hoarding vs saving
With larger items (tillers, vehicles, mopeds, chainsaws, wood stoves, etc) I try to keep tabs in my social circle in who needs it might need access to a good deal more than I do. Sometimes it helps assuage your FOMO to know that someone who really (and not hypothetically) needs something to put the use can get it, when it works out that way.
show more
2 years ago
zero waste
What's Your Mind Like?
"like minded" doesn't really describe the search for a facsimile of the idiosyncratic landscapes of one's mind to me. I think in most cases it simply means, "looking for someone who has similar muses", as a vague starting point to be further refined via "vibing" -- since most people don't really know what they mean or want most of the tube. Of course differences can be more polarizing depending on the subject. Politics or philosophy as muses might require more similar thinking in order to get along well, or else a very adroit ability to interact with ideas foreign or opposite without hostility. Whereas if two people enjoy cooking wildly different cuisine but are culinary adventurous otherwise, that could be seen as very positive. Probably both trouble examples but whatever.

I tend to be drawn towards *how* people possess their ideas as much as the ideas themselves, and communication style is extremely important to me. Most people probably want a mix of commonality and difference, so that they feel some solidarity but also some novelty and challenge at the same time.

show more
2 years ago
permaculture singles
SWF interested in talking for now
Hi! I sent you a "purple mooseage" DM. Don't know what the notification system on this site is like so I thought I'd comment too.

Hope we can have a chat!
show more
2 years ago
permaculture singles