Trees NOT to put on a slope?
Thanks you very much for your input, Ken. Spring floods are a hazard on the floodplain, a few metres' width around the river, but not in the slope itself. We're talking an elevation of probably around 15 metres (50ft) from river to house, and I won't be planting on the flood plain until I've had more time to observe it. I'm very curious about these edible ferns you mentioned. Although there are ferns quite literally everywhere (you know it's winter in Brittany when all of the country roads are suddenly 3 metres wider because the ferns on both sides have died back) that appears to be a species that is not native to us. I'll definitely have a deeper look into it.

Hi Brenda, and thank you for the advice. Yes, my shopping list is full of trees that do not grow so tall they need to be harvested with a ladder, and I'm definitely working around the "where can I walk" (and "where can I make a path, the day I'm less stable on my feet") principle. Thank you for the wood tip. If it turns out to hold water poorly during the drier months, I'll definitely do that.

Thanks, Mark! That wattle idea is quite inspiring. The reason I'm a bit worried about some trees perhaps being less suited is because we have a large ash tree lying across part of the slope that has apparently slid and been pulled out by the roots. I have no idea how long it's been there, but I'm guessing the tree got too heavy (it's significantly larger than anything else on the slope) combined with terrible slope management (the previous owner hasn't walked the slope for at least 10 years, maybe never during their 20 years here - it's been used as a place to toss old building material, oil cans, beer bottles etc. where they are hidden by the very invasive brambles).
show more
8 years ago
forest garden

Just out of pure curiosity - how far south is ‘south’. I was born and raised near Malmö, myself.

I've not tried what you're describing, but I'm thinking that if you hope something will out-compete the grass you need to be sowing something very invasive. With all that could've self-seeded itself, what you're most likely to find in your greater area are (in my experience) dandelions, and plants like nettles or ground elder forcing their way in from the edges. Most things seem to need to be pretty well established, root-wise, before they can compete with grass. Based on what I've read about converting lawn into meadow, typical meadow plants may be able to be seeded into grass if the soil isn't too compact, but the grass growth will shade most things and thus stunt their early growth. So, you need to be sowing something that quickly grows taller than the grass, or which can survive being repeatedly cut down as you mow the lawn to ensure that your plants get sun.
show more
8 years ago
forest garden

The book sounds very interesting. Is there a table of contents, or something to that effect, available somewhere online? There doesn't appear to be one on Amazon or on the official website.
show more
8 years ago
forest garden
River 'shaping'
Hi Dave,

I'm afraid that I don't have the experience you're looking for. Is that the H***e and your upcoming purchase you're talking about? If so, before you make any plans to divert the flow, make sure you know what's in your right.

And that's assuming your river, like ours, can't be navigated this far from the bay. Otherwise:

As for how much you can alter the water-flow of your river, if private, I'm assuming la mairie can answer questions of that nature. Sorry if I'm just repeating things you've already thought of.
show more
8 years ago
hunting and fishing
interesting mayan way of creating a food forest
Very cool, Blaine. Thank you for the link!
show more
8 years ago
forest garden

Trees NOT to put on a slope?
Hi Ken. The server is temporarily unavailable, hence the picture is not loading. This happens once in a while, but it usually comes back online in a couple of minutes.
show more
8 years ago
forest garden

Trees NOT to put on a slope?
Hello folks, here I am with yet another slope question:

OK, so I have this slope that varies from rolling hill to precipice (well, almost). Some parts you can walk/climb down, some parts not so much. My plan, one that I have slowly started implementing, is to make most of this slope (except for the currently dangerously steep part) into a food forest. I've cleared large chunks of it, so that I can actually walk there (it was an impenetrable jungle) and sown erosion control plants. I've also realised, from planting a few apple trees, that it is very rocky. I initially feared that I was landslide-exposed bedrock, but there's soil in there, it's just rocks of varying sizes sometimes lying very tightly packed. Digging with a spade is impossible, but it's light work with a terracing pick.

So, that's what I'm working with. Now, I have a long shopping list of trees and shrubs (to start with).

Is there anything I shouldn't plant on a slope like this? I've stayed away from dwarf trees, and for practical reasons I think I'll plant the nuts and chestnuts on the northern border where the land is flat and I don't need elaborate netting to keep my harvest from rolling into the river. But, is there anything that will root poorly in a slope and be an erosion risk?

Here's the plan right now for the curious. The gradient part is the slope, and dark grey parts are just planned... all the circles with numbers in them are the major trees that are currently in the ground and will stay there. 1 = Holly ; 2 = Ash ; 3 = Oak ; 4 = Hawthorn ; 5 = Crabapple ; 6 = Apple (Ontario, Ingrid Marie, Calville Étoilée); 7 = Cherry (Lapins). The brown part is a tractor road and the blue part is the river, obviously.

ETA: The top part of the I-section is the part you can't walk down. The rest is OK, although it can occasionally be difficult i 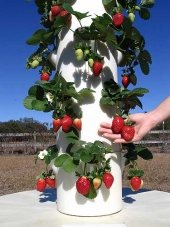 Brenda Groth wrote:strawberries shouldn't be around PRUNUS (for some reason, not sure why). I have some coming in spring and was going to plant them near prunus, now I have to figure out a different place to put the little buggers. I know they can take a woodsy edge as wild strawberries grow in shade and acid soil


That's interesting, Brenda. Any idea how close "around' means? Naturally, the spot I've cornered off for cherries, plums and peaches is over by the land I've earmarked for what I currently call my asparagus and strawberry terraces...
show more
8 years ago
hugelkultur

Maybe some kind of strawberry tower or even a more classical strawberry pot? Or maybe you're thinking of some kind of structure made with climbing strawberries?
show more
8 years ago
hugelkultur
Weekend Homesteader
I'm late to the game, and I can't say that I've ever actively tried to ‘convert’ my husband, but I agree with what has been said about targeting what interests your spouse.

My husband (1) loves food, and (2) having a well-stocked pantry makes him feel secure, so when I started making jams, chutneys and whatnot, and stocking our pantry with them, he got excited about what we could have in the pantry next year. While he initially agreed to a largeish (for the suburbs) yard if I took care of the gardening, he got a lot more involved after a summer of being able to walk out the door and pick his lunch. When it turned out to taste so much better freshly picked and organic, he became even more on board. Since he's financially-minded and we're both freelancing, the idea of saving money and being prepared for not having enough work added interest. And, it really went from there. Soon enough he was completely on board.

Now, I tell him that I've identified that shrub that is currently in flower everywhere (gorse) and his first question is "Can we eat it?" (the answer, apparently, is yes - we made cordial) and the second is "Can we grow it?" That's the man who didn't want a yard when we bought a house in the suburbs 7 years ago. These days we'll be eating guacamole and he'll turn to me and ask "Avocados... can we grow them this far north?"

I don't take much of the credit... when we first started dating he dreamed of getting a cabin in the very north of Sweden far away from people. Him getting excited about my dream of the French country-side and making it his own wasn't hugely unlikely. But, he probably wouldn't have gotten there if he hadn't seen time and again how it related to his interests, and to him this is, simply put, a money-saving, pantry-stocking (i.e. security-producing), highly delicious project.
show more
8 years ago
homestead