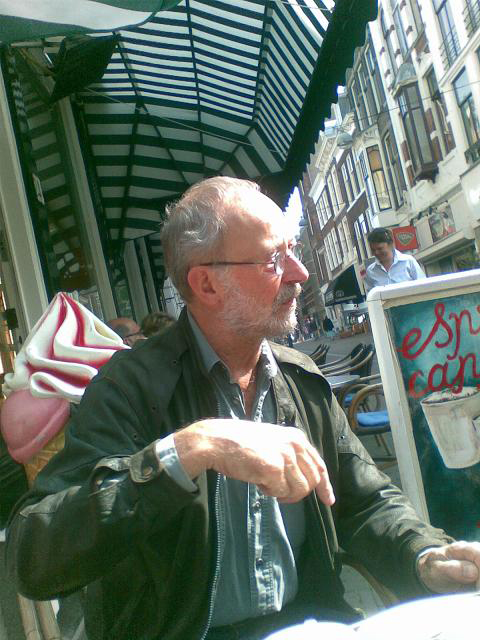 He's been a furniture maker, mold maker, composites specialist, quality inspector, master of boats. Roughly during the last 30 years he's been meddling with castable refractories and mass heaters. Built a dozen in different guises but never got it as far as to do it professionaly. He loves to try out new ideas, tested those by using a gas analizer.
Lived in The Hague, Netherlands all his life.
+52° 1' 47.40", +4° 22' 57.80"
Apples and Likes
Apples
Total received
111
In last 30 days
4
Total given
0
Likes
Total received
430
Received in last 30 days
9
Total given
1
Given in last 30 days
0
Forums and Threads
Scavenger Hunt 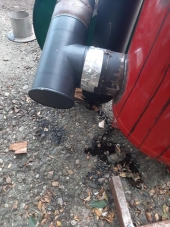 Dealing with condensation
Fraser, I suspect there's a flaw in the prototype you've built so far. In order to maintain a good gas flow one need to provide lots of space for every change in direction. 150% of system size for a 90º bend, 200% for a 180º bend. The reasoning is this: friction is killing the gas flow which is absolute necessary for the correct functioning of the afterburner.

It's unclear what system size you have there, but to name a few pinched spots: the space above the riser, known as the top gap.
You don't show any picture of the front, but I think the core is placed reasonably low. In case the core is too close (just a couple of inches) to the back wall of the barrel this will be in combination with the 80º direction change another pinch point.
The T behind the 1st barrel is a double friction point, in the sense it's a 90º bend but also the closed end of the T. In that end is a weak vacuum, slowing down the stream.
And last but certainly not the least: it would be much, much better to have that 2nd barrel coupled to the 1st without an intermediate stove pipe in between. OR, just assuming this might be impossible for whatever reason, just a straight pipe of a much larger diameter. When completely open to each other, those barrels will act like one larger bell of a funny shape.
This is what I built in a couple of instances and it worked beautifully. There's are examples on the batchrocket site, the bell with two-sided blind ended bench and the Mallorca build.
show more
3 days ago
rocket mass heaters 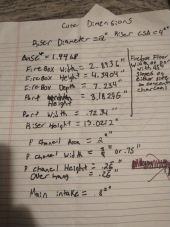 T Giles wrote:how tall is the top box compared to the firebox,


The front of the top box is square, i.e. width and height are equal to the width of the firebox.

T Giles wrote:should the riser stub be flush with the top box back wall or should there be space,


The best results were obtained with a firebrick liner of 30 mm on three sides of the riser stub, left, right and rear. A couple of months ago I tried the development model (a 125 mm or 5" version) without this liner. Don't leave it out, results were dramatically worse.

T Giles wrote:and how large should the stumbler block be

The DSR2 is a very tight design, even more so as compared to the basic batchrocket.
show more
4 days ago
rocket mass heaters

T Giles wrote:Using the ratios on batchrocket.eu I have calculated the size that a box with a 2" riser would be. I havent heard of a box that small being attempted before, and Im curious if the drastic change in size will adversely affect efficiency.


Hi T, I understand you are aiming for a 4" version of the DSR1. First, a 4" batchrocket of any version is not a practical thing to use although it can be very powerful. The problem lies in the fact you have to feed it quite often with small sticks in order to keep it going. Second, the DSR1 didn't cut the cake in a real life situation inside two barrels and coupled to a decent chimney. In fact it went in thermal overdrive 50% of the times I fired it, consuming fuel faster and faster at an alarming rate until it was too much for the afterburner function to cope with. Resulting in lots of unsightly black smoke until all the fuel was gone.
No gains to harvest, rather the opposite.

T Giles wrote:the first and foremost tweak would be moving the port to the top of the firebox, rather than the rear, similar to the double shoebox design seen on peter van den berg's more recent videos. However, unlike the more square shape seen in his videos, I would like to retain the long(tall) narrow port that the original batch box design has.


Please have a look at even more recent videos, starting with Batch Box Rocket Stove 20 up to and including 24. That's about another implementation of the Double Shoebox, Mark2 in this case. This one has led to a complete and thoroughly tested version which works surprisingly well. Mind you, development of this one took a full year.

T Giles wrote:can a vertical riser be used with a port that rests on the top of the firebox?


No. Tried that one a long time ago, been there, done that.

T Giles wrote:another design change I wish to implement would be moving the 45° angles from the bottom corners to the top corners of the box.  I am unsure about whether those would extend all the way back in the firebox or stop just shy of where the port would begin.


Those 45º angles are there to concentrate the charcoal in the middle of the firebox, they won't have a function on the ceiling at all.

In case you are looking for a simpler and more compact batchrocket design, have a look at https://donkey32.proboards.com/thread/3503/double-shoebox-rocket-mark-ii It's quite a long thread but worth to read it all, if you are interested of course. Some remarkable features are incorporated in this particular design, I got it to the point where it was unable to go into thermal overdrive. No matter what I did to it, it simply refused to belch smoke.
This design isn't published on batchrocket.eu yet, mainly due to health issues. But drawings in SketchUp format are available.
show more
6 days ago
rocket mass heaters 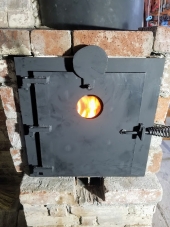 Batchbox - some newbie questions
Thanks for the offer Lukas, I'll think about it, seriously!
Your calculation of a bell is not correct, you are ignoring the ceiling here...
Assume the ceiling is internally 85x85 cm, that's 0.72 m². Now 7.2 m² minus 0.72 m² is 6.48 m², divided by 4 is 1.62 m². This last one divided by the assumed 0.85 m means the walls are 1.9 m high internally. Externally the bell would be much wider, deeper and higher, of course. Lift the firebox 40 cm from the floor for convenience and bob's your uncle.


Talking about chimney diameter, those chimney metal pipes I've seen selling online in my country are anywhere from 120mm to 200mm. So does the pipe's diameter has to be 180mm if the heat raiser's diameter is also 180mm or there's no connections whatsoever between any of heater's dimensions and the pipe diameter?


That would be, probably, one that would suite my needs. So ISA of 7.2m2 - that should be divided by 4(sides of the bell)? Or by 5 where the fifth surface would be the cover/"roof" of the bell?


In case you want to implement the heater as a true cube, the ISA should be divided by 5. For determinating ISA all the surfaces count except the floor. In practise, the heater would be higher than wide and deep because of the required minimum riser length. Don't worry about the walls of the firebox and riser, those should be insulated with superwool anyway. Don't forget the distance between riser top and bell ceiling (known as the top gap) should be equal to the riser's diameter at the very least
show more
2 weeks ago
rocket mass heaters

Batchbox - some newbie questions
Hi Lukas,
Thomas answered your questions already, bar the one about the calculated base number. That base number is used for to scale the combustion core and its parts without steps as in the provided table. To determine it, multiply the chimney diameter by 72.34%, the resulting figure is the calculated base number. All the other dimensions of the core are derived from it, that's why it is called the base number to begin with.
I have chosen this method so it would work all over the planet, irrespective of whatever measurement system one is using.

Having said that, all the above information and more is already on the website, namely above and below the dimension table you've already seen. I'd recommend you read that thoroughly.
Please see http://batchrocket.eu/en/building#dimension
show more
2 weeks ago
rocket mass heaters

Top loading highbred?
Just a suggestion: try to position the throat in the middle and a bit lower than the firebox. And the cross section area of that throat about 70% of the riser behind it. Then you would end at the batchrocket specification which is tried and tested by now about 500 times using a gas analizer.

Mind you, it can also be done employing a single vortex, i.e. the venturi opening at the side. In that case the csa should be a bit smaller, say 60%, and the opening should be lower than the firebox again. The bottom of this throat, gate, port or whatever one would call it always at the level of the firebox floor. During a lot of experiments the single vortex results always weren't as excellent as its double counterpart.
show more
1 month ago
rocket mass heaters

Gerry Parent wrote:There is another one (but can't find it right now) that's all in french but they install one I think in their yurt.

Top loading highbred?
Back in 2012, during the 9 months' development of what was later dubbed as batchrocket I did some measurements on vortexes and their relative performance characteristics. In short, a single vortex works although clean burning was induced somewhat later in the combustion process and the riser should be at operating temperature. A double vortex device isn't any more complicated to build but can be run clean much earlier in the process.

In fact, the moment the roaring sound starts, the CO level drops down, even in a stone cold core. This wasn't the case with a single vortex so I concentrated on its double counterpart which looked like to have the best papers to a succesful and simple to build core. A single vortex device might be persuaded into comparable behaviour but in order to do that one need lots of time and a calibrated gas analiser. The chance to hit the right proportions and shapes by sheer accident and first time is actually equal to zero.
show more
3 months ago
rocket mass heaters
Thermodynamics Class RMH application
Most of the time the digital thermometer can withstand and measure 2370 ºF or 1300 ºC, but the K-type thermo coupler can be used up to 1000 ºC or 1830 ºF. Above that temperature they'll die silently, I've seen that happen multiple times, much to my dismay. There's another thermo coupler that will survive 1300 ºC, unfortunally I forgot which one. And I might add: the thermometer need to be ready to accept those higher specc'd couplers.

Mine is a simple two-channel type only useful for K-types from Conrad Electronics. At some point I could borrow a higher specc'd instrument with couplers, highest recorded temperature using that one was 1172 ºC or 2140 ºF, close to the theoretical maximum of 1200 ºC or 2190 ºF for an atmospherical aspirated wood fire as I was led to believe.
show more
3 months ago
rocket mass heaters