Tempeh Making
Sorry that's unclear.  Step by step my process is 1. soak the beans overnight, then drain off soak water and replace with fresh water 2. Bring to boil and simmer for 30 minutes. 3. Pour off hot water, rinse with cold water and then dehull.  I actually do this by trampling them barefoot in a bucket or stout basket, rinsing away the hulls afterwards. 4. Place hulled beans in a container with water to cover, and add inoculants as desired for prefermentation (a spoonful or so of yogurt, homebrew, etc.) and set in a room temperature place for 24 to 48 hours.  The beans should be slightly bubbly and the water taste sour when done. 5. Bring the beans to a boil in this soak water for 45 to 60 minutes.  If the prefermentation stage is eliminated, vinegar or lemon juice is to be added to the water for the second boil.  6. Drain the beans, spread on a clean towel till just warm, then sprinkle with inoculant and mix. 7. Put beans into bags or containers and incubate.

show more
1 month ago
food choices
Black Soldier Flies without a proper bin
I guess the main danger is that the chickens may be so thorough at finding all the grubs, both mature and immature, as to decimate the colony.  They also need moisture and shade, especially the small ones, so in scratching everything over and possibly exposing them to the sun more might also be a problem.
You don't need an expensive bought "pod" to raise them in.  Any bucket or barrel or other container will do, just tipped up at the right angle, and the mature grubs will crawl up the incline and drop out....perhaps to waiting chickens!   Put a drain hole on the bottom corner and a loose lid over the open end to shed excess rain, but allow adults to enter and lay, and you're good to go.
show more
4 months ago
chickens
Concrete Cloth
@ Jack....I did take very detailed photos and put them into a scrapbook, but this was before I had a digital camera or a computer on site, and since then I haven't gotten around to the big project of scanning them, etc.  It's really pretty straightforward....just get the carpet wet ahead of time and slather it on with rubber gloves and a trowel.  Keep a tray under any vertical surface since quite a bit will fall off and you can then re-apply it easily.
@Ellendra As I recall I tried to coat at least one whole piece in a session, probably just because mixing the concrete and all is a big project and a mess, so it seemed worth doing a lot each time; but I don't see any other reason why one couldn't do less than that.
show more
8 months ago
homestead
Newbie looking to start a intentional community or just meet like minded people
There is a pretty wide literature now around intentional community, ic.org is a good place to start. I've spent a good part of my adult life in community settings of various sorts, and there are a few ways that it can succeed, and rather more ways to crash it, some of them spectacular.  Cimarron's story above is probably one of many many that could be heard and mined for their lessons.  Do the research.  If I were you I would try to visit some already existing communities...that website is searchable by keyword and location.  If possible stay a while, as in a few days at least, and try to get a feel for them.  Most smaller communities are usually happy to host helpful visitors, especially if they are game to camp or bring some $ or stuff to share; in exchange for helping out on the day's work, of which there is always too much.  Ask people what it's really like, especially if you find yourself one-on-one.
show more
9 months ago
intentional community

Mediterranean Nitrogen Fixing Trees
I think that in climates that experience more frost, tagasaste will be a disappointment.  I had a few and they all gradually died out.  I'm technically in a Mediterranean climate in inland California but I regularly get winter lows to 20F (-7C).  My main N-fixing trees that are thriving are black locust(Robinia), "mimosa" as Americans call it (Alibizia julibrissin), blackwood acacia (A. melanoxylon) and Casuarina cunninghamiana. Of these I would have to say the Albizia is the only one vigorous enough so far to be cutting any for forage or to consider coppicing, which is surprising since it is not native to a Mediterranean climate.  All of them are under drip irrigation though, so if I shut this off perhaps one of the others would edge into place of preference.
show more
10 months ago
trees 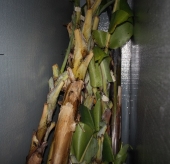 Atypical Ideas For Cold Weather Tropical Fruit Growing
In a climate that is usually amenable to the plants in question, but where the occasional freeze might otherwise kill them, consider a simple overhead sprinkler.  Left running all night or for the duration of the freezing weather, it will form ice all over the plant.  As long as water is in the process of turning into ice, the temperature of the whole thing won't go much below 32F/0C.  I have attached a sprinkler to the top of a tall bamboo pole to go up and over full size fruit trees this way....it is also a good thing to try for blossom protection on deciduous fruit.  The main danger is that in sever cold, the ice may get so heavy as to bend or break the branches, and if there are several consecutive nights of cold, the ground might get soggy from the excess water....which is also a problem for many kinds of trees.
show more
11 months ago
fruit trees

Meeting that special someone with values similar to yours - at a permaculture workshop or event
Don't forget events and groups that are allied to permaculture but don't use the name.  Most states have some kind of organic grower's group, for instance....this is where my partner first laid eyes on me.  Think about environmental organizations, activism around threatened areas or other issues of concern, and just other fun social activities....music festivals come to mind.  Of course all of this assumes pre-or-post covid world, but there is also a surprising amount going on on line as well.  It has many dangers and drawbacks, but I met one awesome girlfriend on a dating website, too

show more
11 months ago
permaculture singles
Hanging/aging duck
Why not pluck the birds and clean them, so as to harvest the liver, and then age the rest of the bird?  At least with other animals like sheep and cows you clean the innards out right away and then age the rest of the animal in the cold as desired.
show more
11 months ago
ducks and geese
Forest garden in the forest?
I have proven to myself again and again the hard way that it is nearly impossible in many cases to "tuck in" desirable plants into any kind of existing forest or shrubland and expect them to succeed.  What's already there is already established and will overwhelm the new plants more than likely, competing for water on drier sites and sunlight everywhere.  Most common food plants, including fruit and nut trees, need some direct sun to thrive.  In addition, new plants will often need supplemental water during dry spells, if you have them, and fencing against animals.  I have found it far better to think, and to work, in patches....clearings large enough to let sunlight hit the ground.  Make them large enough to hold several mature trees of your choice, as well as infill shrubs, perennials, etc.  That way you can fence the entire area and direct irrigation to it, etc. rather than keeping track of a bunch of scattered small plants.  An excellent way to do this is to just plant gardens in these patches...annual veggies, grains, etc. and then plant your perennials and trees among these.  The new plants will benefit hugely from the additional attention primarily directed at the annuals, and when they fill in enough to shade the annuals out, you move on and start a new patch somewhere else and keep going till you have as much food forest as you want.  This is working with succession, rather than against it.
show more
11 months ago
forest garden
Composting coast live oak leaves in dry Southern California
I also live in CA and have lots of oak leaves.  I also try to avoid the work involved in deliberate composting and try to minimize the amount of time I spend handling stuff like this.  And they must be taken up for fire suppression, along with the pine needles which are the other main item.  Some end up under the sheep in their night pens, but that only needs so many.  Every year I completely dig out one of my 30 foot raised beds, setting the soil off to the side.  This allows me to look at the mesh and plastic in the bottom and be sure that no rodents, tree roots, or bermuda runners have encroached, and then I begin to refill the bed, layer by layer, and add in all the leaves, as well as any other garden cleanup stuff.  I cut up cardboard and put it in there too.  When a layer of this stuff is six or eight inches deep, I pour urine on it for a couple of weeks, then add a layer of the soil back, and start again.  By spring planting time the bed is topped up to the brim and all the rakings and garden prunings and sheep manure and humanure and livestock slaughter scrap and everything else compostable is down in there.  As time goes on it all composts, down there while I'm irrigating stuff over top, and since I have three such beds it will be three years before it's dug out again, at which time all the stuff has become fluffy soil.  This process gradually increases the volume of the soil in the beds, but that is fine since I've been slowly adding more beds elsewhere!  I long ago gave up trying to mulch on the surface of the soil, like I did when I lived in the South.  The stuff never breaks down, it's a fire hazard, and it seems to make an instant habitat for large numbers of earwigs, millipedes, pillbugs, and slugs.  My conclusion is that in the dry West, mulch really belongs below the soil, not on top of it.  Compost happens by default, without direct attention.
show more
11 months ago
composting