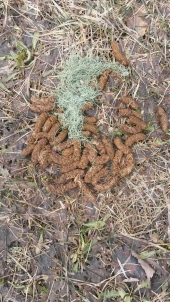 Perplexing Porcupine Poo Pile :)
I have a porcupine that leaves piles just like that
show more
4 years ago
hunting and fishing 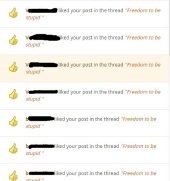 Someone liked your post error
It could be either of the things mentioned.  It looks like it isn't a glitch after all, my mistake.
show more
4 years ago
tinkering with this site

R, that wasn't directed at you, we were posting at the same time.
show more
4 years ago
ethics and philosophy
Freedom means having the freedom to be stupid

David Livingston wrote:Hi Todd
I am not suggesting that you don't have a right not serve folks who cause trouble , it's when you have a policy of refusing service to a particular group because folks belong to that group. Bit like the old colour bar .Did your night club automatically refuse to let people in based on their ethnic origin ? I hope not :-)  If you look on you tube there is a wonderful film from WWII for Afrrican American soldiers about to be  stationed in Britain explaining that the UK did not have a colour bar etc it's a hoot I think it's by Giles Meradith . Am on my old phone so cannot link to it.u
Every group has it's trouble makers .even on the left :-)

This will unfortunately take us down a path that has been thoroughly beaten down, but I guess in this instance, much hinges on whether homosexuality is a choice or not. Our club did refuse to serve certain groups. Any bikers wearing their colors, for instance were not allowed in. Is that discrimination? In a culture of victimhood, I would say it is, so I suppose we discriminated. We didn't refuse to serve them because they did anything wrong. I don't see it the same way I see denying someone because of skin color.
show more
4 years ago
ethics and philosophy
Freedom means having the freedom to be stupid

you said "but if I own a business, it is not a public service in a public place.  It is a private service in a privately owned business on my personal property that I bought and paid for."
You own a buisness that operates in the public domain because you invite the public in  . Your idea to me  sounds like I can do anything I want and ignore the law because I own this place .Logically to me  then this includes all laws like murder .  I think all  the laws apply everywhere I dont think cherry picking is allowed other wise what is the point of having laws  . If you want to descriminate against customers then vote for changing the laws :-) or moving somewhere where you can refuse to bake such cakes . Uganda maybe :-)

As far as I know, there is no law that says I have to serve everyone that comes thru my door. Almost every bar has a sign that reads "We reserve the right to refuse service to anyone." When I owned a computer business, if someone was a rude asshole,  I asked them to leave and wouldn't serve them. When I worked as a bouncer, most of my job was making people leave a business if they didn't want to leave, and i would physically drag them out if they refused. Not illegal.
show more
4 years ago
ethics and philosophy
Can we just all win the lottery?

Jarret Hynd wrote:
The only time I end up suggesting stocks or mutual funds is when people have no self-control over their money  - it's a way to lock it up in an investment and become untouchable for them.

I don't understand this reasoning.  My mutual fund for instance, with the current amount I put in monthly and current interest rate, doubles every three and a half years.  It has nothing to do with having no self-control.  Its a great investment.  As far as being untouchable, money from stocks or mutual funds can be withdrawn any time.  It takes little more time than withdrawing it from your bank.
show more
4 years ago
financial strategy
Freedom means having the freedom to be stupid

Chris Kott wrote:
I think the reason you see a lot of push-back and resistance to rightist or conservative sentiment at universities and colleges, to the point where many speakers aren't allowed by the audience to speak, is due to logical disagreement with stances on issues and agendas being pushed.

If someone is being invited to a school by a segment of that school's population, they will obviously have a body of material documenting their opinions and credentials. Those will likely inform potential audience members about said speaker. It is highly unlikely that anything truely new will be advanced in such a setting, especially with the current political climate. The protesting students are simply exercising their collective right to freedom of speech.

When Dr. Pulaski mispronounced Data's name in the second season, he corrected her, and she responded with, "What's the difference?"

His answer applies. "One is my name. The other is not."

It's about respecting others, Toadd, and thinking about them before our own concerns in situations that primarily concern them.

I'm always surprised when someone I know to be intelligent looks at the exact situation I am looking at, and sees something completely different.

If a conservative gives a speech at a college, and college students blow air horns throughout the talk (which is held outside of normal class times and participation is purely voluntary), they are expressing their right to free speech, rather than destroying the conservative speakers' right to free speech.  On the other hand, if a group of conservatives were to blow air horns at a LGBT rally, they are homophobes that are trying to keep a group of people from having equal rights.  In my mind, if I go to a talk given by someone with views that are very different than mine for the sole purpose of blowing an air horn or chanting loudly enough to drown out the speaker, I am the one that is infringing on someone's right to free speech, not expressing my own.  The people blowing the air horns are the ones being disrespectful to other people's points of view.  Personally, I would never classify myself as a conservative and I have some very major disagreements with some of their points of view, but when I look at situations like that, I see hypocrisy, and it disturbs me.

As far as the pronoun thing, I agree you that people have the right to self-identify.  If I have a male friend that wishes to present himself as female and wants to be called he or him, or she or her, it's fine with me.  If I am supposed to refer to my friend as qwehowefj or okpeen, well, my contention is that that is not a valid pronoun and you can pass any law you like, and I'm not playing along.