Another take on off grid refrigeration...

jack vegas wrote:Not to spoil all the fun since I'm just as guilty as the next guy of endlessly brainstorming alternate technologies, but it seems like most of the approaches described here will cost more to build than simply purchasing a conventional refrigerator and running it from a set of photovoltaic panels with a battery pack and inverter.  I suspect such a conventional system could be assembled for under $2000.  Maybe under $1000 with a used refrigerator and scrounged battery pack.

Cost breakdown for the solar ammonia absorption icemaker is $510. That was a few years ago, but it's probably not too much more now. An Icyball clone can be made much cheaper:

An icehouse would be more expensive, though.
show more
2 months ago
alternative energy

Another take on off grid refrigeration...
This solar ammonia absorption icemaker uses no electricity and can make 10# of ice per cycle:

There is also the Icyball; I've seen plans online to make modern clones. Refrigerate with a woodstove!:

An icehouse is another option:

Growing nuts up North (cold resistant)
Update on this--I have been getting kiwi fruit the past three seasons in Fairbanks. The male cultivar "Pasha" has survived our winters well and managed to reach puberty. The fruit set is low, probably because the vines have never been managed for production, so I'm hoping to improve that with some appropriate culture. Ripening hasn't been a problem, and the fruit is sweet, juicy, tender, and flavorful.

Corey Schmidt wrote:Well I'm in zone 6 actually, but its still a cool summer subarctic climate. (look under my name at left or read wikipedia article on homer ak, i think there is climate info there)  I don't know how old the vines were to begin with at the nursery but the one i planted in a pot in alaska earth potting mix (a commercial mix) made about 5 delicious little fruits last year- the first year i had them.  the pots were outdoors near the south wall of a house on a north facing slope and got about half day sun, a decent position but not the best, because shade all morning and evening.

I've got kolomiktas here in Fairbanks. They've survived since the '80s and are pretty rampant now, with trunks a couple inches in diameter. They bloom every year, but I never get fruit because I don't have any males. I haven't found a male yet that's hardy enough, but the females do pretty well, although ther will be some dieback in severe winters. I need to find a hardy male and I'll be in business.

A lot of their material is free, but they have some great books for sale too:

I have a couple of the books. They cover rarely mentioned topics like creating "beetle banks" and nesting habitat for miner bees, both of which are often overlooked when ecosystem diversity is being planned. It's valuable information.
show more
1 year ago
bugs

Thekla McDaniels wrote:One thing I did not see discussed is the transition of a hybrid to an OP variety.  I am working on that with a small yellow orange "cherry" tomato.  I bet most everyone would recognize the name, but I amnot going to say it.  Anyway, I am growing  5th generation from   the original hybrid.  It is such fun to select the seedlings that germinated quickly into sturdy seedlings, and feed the scraggly ones to the worm bin or chickens.

All of his Mother Earth News posts can be accessed here: 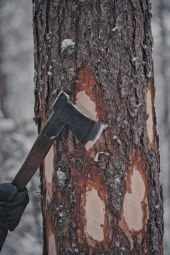 Greg Martin wrote:Does anyone have a picture of the cross section of a tree that had this done and has been felled?  Does all the tree's vascular structure get completely filled with resin?  That should be clear in a picture if that's the case.

Check out the "Fatwood Friends" documents in the "Michael" folder from this link:

Here is slide 13 from the presentation, which shows the effect of the procedure. It's evident that the zones adjacent to the bark stripping have resisted decay:

junkpole fence: freaky cheap chicken/deer fence made from wood typically thrown away
Here's a fascinating video of Finnish rye farmers practicing swidden agriculture in Sweden. They just show up, cut everything down, burn the residue, build junkpole-ish fences and grain cribs from onsite materials, plant the crops, harvest/dry them--these were some working-ass people!: 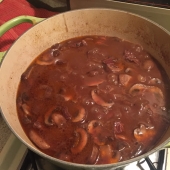 what're your favorite dutch oven recipes?
So I see that link rot has set in on this post; here's an archived version: https://web.archive.org/web/20170726054336/http://www.myhealthyeatinghabits.com/2012/03/21/my-favorite-no-knead-whole-wheat-bread/

The video from this recipe is still on YouTube, though:


Victor Johanson wrote:Do it...I always scoffed at the notion of no-knead bread, until I made some of the dutch oven variety. I used the recipe here:

...except I used fresh ground wheat and only sourdough for leavening. Takes about 5 minutes of actual work.

Rebecca Norman wrote:My sister showed me how to make crusty no-knead sourdough in a Dutch oven. It comes out like a gorgeous loaf from a brick oven, all crusty on the outside, and big holes and soft texture on the inside.

Just mix a fairly wet sticky dough of flour, water, and just a little yeast or sourdough starter (less yeast than your normal bread recipe). Just mix it up but don't knead it, and leave it too sticky to knead, anyway. Leave it on the shelf for several hours or overnight. When it has fully risen and looks like a big bubbly liquid in the bowl, stir it down, then turn it out of the bowl. Line the bowl with a well-floured cloth and dump the dough blob back in. Leave it again for an hour or until pretty well risen.

Now preheat the oven at 475F with the empty Dutch oven inside. When it's good and hot, carefully pull out the Dutch oven and dump the dough into it from the floured cloth. Put the hot lid back on, put it back in the oven, turn down the oven to 350F, and bake till done. The timing varies with the size of your batch and the size of the Dutch oven. You can tell when it's done by turning the loaf out and rapping on the bottom with your knuckles. Basically, it should sound dry through, not doughy inside.

This bread is very impressive. I'd recommend it if you're going to have guests for dinner.

I've been seeing this idea around. I have to try it!

looking for cancer research: cancer rates from 1860 to now
That's a good point about cancers being detected and perhaps consequently treated with excessive (and destructive) aggressiveness. One of the reasons I eschew doctors' visits is that I fear they'll find something and proceed to apply their "expert" butchery that will only interfere with my immune system's ongoing process of competently dealing with the problem in its own way and on its own schedule. Sure, chemo and radiation may kill the cancer, but how will the ravaged body subsequently fare? I guess I just trust my body more than I trust an individual who's been brainwashed by a system that has abjectly failed to even discover what causes these maladies and why they've recently proliferated. Trying to avoid the things which have changed in our lifestyles since these conditions arose seems to me a preferable strategy.

The medical establishment is filled with unjustified hubris and arrogance, because the truth is that when it comes to the incredible complexity of the human organism, we're woefully ignorant. Recently I went to a dermatologist (mostly to assuage my wife's paranoia that the eczema might be some kind of cooties she might catch), and she took one look and immediately said "I'm going to fix you," before prescribing some steroid cream and advising me to use some chemical-laden ointment (while disparaging my suggestion to use lanolin instead) to prevent the lesions from drying out. I tried to question her about potential etiology and its possible relation to some concomitant digestive issues, but she was already halfway out the door, typically fixated on only treating symptoms and clearly not the least bit curious about cause. Apparently $400 only buys about five minutes of her precious time. I never used the stupid cream; switching off my immune system to "fix me" is analogous to ripping out a car's check engine light when it comes on and pretending the problem is solved. So far, the "Vitamin A guy" approach is working, but even if it ultimately proves a bust I'm committed to getting to the root instead of just trimming off some branches.
show more
3 years ago
science and research