(Taco Tuesday was formally known at "Feast and Shower Night")

All Wheaton Labs residents are welcome/INVITED to join us for Taco Tuesday!
Contributions are welcome though not required.
Some times the best contribution is help in the kitchen.

Fair warning: Paul turns in to pumpkin after 9 p.m. so he asks that folks move to the library or otherwise leave the FPH by about 9 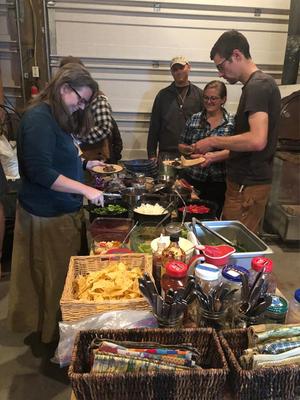 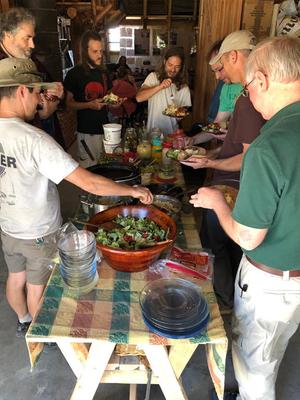 The basics we typically have include:
-- a big crock pot of beans (black or pinto, some times both)
-- a big pot of rice
-- tortillas (usually wheat, unless someone makes, buys, or brings corn or other alternative)
-- corn tortilla chips
-- all the taco bar fixings - onions, jalapenos, avocado, etc. (it will vary depending on what's on hand)
-- side veggie - coleslaw, roasted broccoli (again will vary)

Usually, all of the basics (such as the above examples) are vegan, though we might have meat available, or cheese, or vegan cheese, or cow's milk yogurt to use as sour cream.

Sometimes Taco Tuesdays turn into Tiki Tuesdays (where pineapples and sweet potatoes are often involved), and there might be other alliterative Tuesdays, but generally we're really happy with tacos!

The outpouring of gifts has been really lovely so far.

the gift of help in the kitchen - this is great because cooking for a 7 to 8 to 10 people requires a lot more chopping and prep time than cooking for just one or two people.
-- food prep - most everyone helps with the chopping, dicing, slicing, shredding, mixing, cooking starting at about 4 p.m.
-- knife sharpening - oh, how useful/helpful/awesome is this!
-- harvesting
-- dished and more dishes - there has been LOADS of help with this before and after the meal -
the gift of food
-- Evan brought homemade kraut to share
-- Fred brought fermented foods
-- Josh brought creamed honey and rice and lentils
-- folks have shared huckleberries they harvested nearby
other gifts
-- shoveling snow off the front walk
-- cleaning the bathroom

For more general food info, see the public food and drink at the project thread.

posted 6 years ago
Feast nights are on a temporary hold. Folks are welcome to shower on Mondays, same time, until the shower shack is operating (which could be soon!), it's the meals that are on a hiatus for a bit.

posted 6 years ago
Feast nights are on again!


Jocelyn Campbell wrote:The current open invitation for feast nights is varying days/dates (see this post or below for days/dates) dinner is served at 6 p.m. though folks are welcome to come by any time before to help and shower (we prefer showers to happen before dinner). Cooking might go on all day, though really starts in earnest at about 4 p.m. Most of the time, we try to wrap up around 9:00 p.m. because Paul is (was) used to going to bed at 9:30 p.m. We've also said folks are welcome to bring in their recycling to wash at the house.


Additionally, folks are welcome to use the FPH washer and dryer starting at noon on Mondays. Paul asks that laundry and showers happen before dinner.

For anyone in the area, or who have been here before, you're welcome to join us! It helps if you let Jocelyn know (so we have enough plates, chairs, etc. - we might move to the shop for extra large groups) and bring something to share.

Edited to change from Mondays to varying days/dates.

posted 5 years ago
We had originally scheduled feast nights on Mondays, because Sundays were supposed to be a day off for Paul and myself. (We often work 7 days a week, and are trying to not do that so much any more.)

Then Mondays started getting busier for me with my client work and it was stressful trying to both in one day. On Sundays, I don't have to respond to clients.

Plus, as someone pointed out, often times a weekend visitor will depart on a Monday, and miss the feast night. So we have a least a couple votes to move these to Sundays.


Edited (again) to firm up dates and clarify details.

posted 5 years ago
January feast nights
For all dates, come by for shower or laundry any time, dinner help welcome at 4 p.m., dinner starts promptly at 6 p.m.

posted 5 years ago
We keep changing our feast nights, and have not yet settled on Sunday or Monday.

I missed posting about feast nights for the first part of February, so here are the next feast nights through April - though subject to change!

For all dates, local friends welcome, too! (Please let Jocelyn know so we have enough chairs, etc.)
Residents, feel free to come by for shower or laundry any time, dinner help welcome around 4 p.m.
Dinner starts promptly at 6 p.m.

posted 5 years ago
Whew! 18 people at last night's feast night, so we moved to the shop/auditorium. It was nice to have ample elbow space to chow down!

As Paul posted here, we had the pleasure of dining with Josiah Wallingford of PermaEthos and his dad, Bear Paw, bearpaw.com. 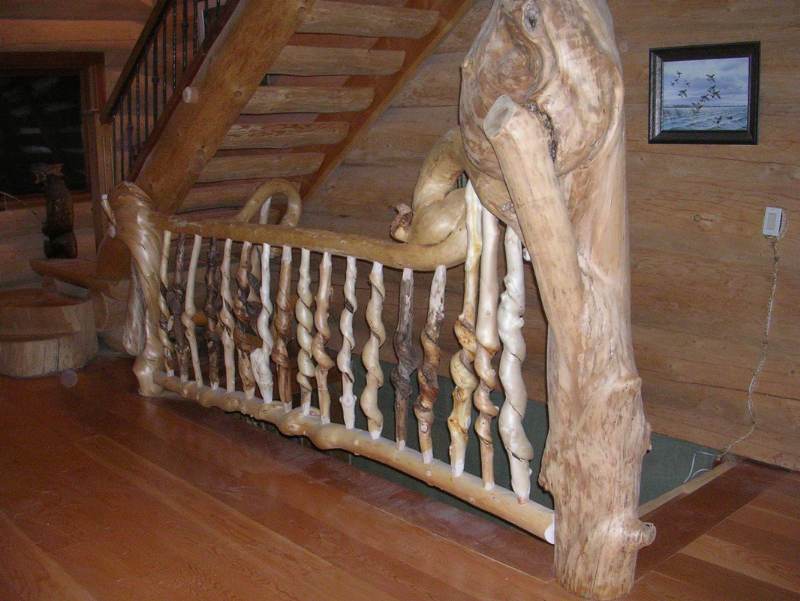 Our next feast night, April 23, 2017, will be with our next visitor, Nick Fouch, of Fouch-o-matic, - see Paul's post here, for more information.

Let Jocelyn know if you're wanting to join in so we have enough tables and chairs.

posted 5 years ago
Next feast nights after April will be all on Mondays:

Edit 5/20/17: have to cancel the 5/22 feast night, though we might schedule a last-minute pot luck with the PDC or ATC classes!

posted 5 years ago
We will have pot lucks open to residents and local friends during our PDC and ATC!

Note, these are typically the cook's day OFF, so don't expect a huge main course from us as we have provided on feast nights in the past. Truly pot luck for these.

Move or talent night at 7 p.m.

Note that we might be a bit short on tables and chairs - especially during the PDC.

posted 4 years ago
We're back up with community dinners - this time, Taco Tuesdays!

It's because we support the Gay Agenda: 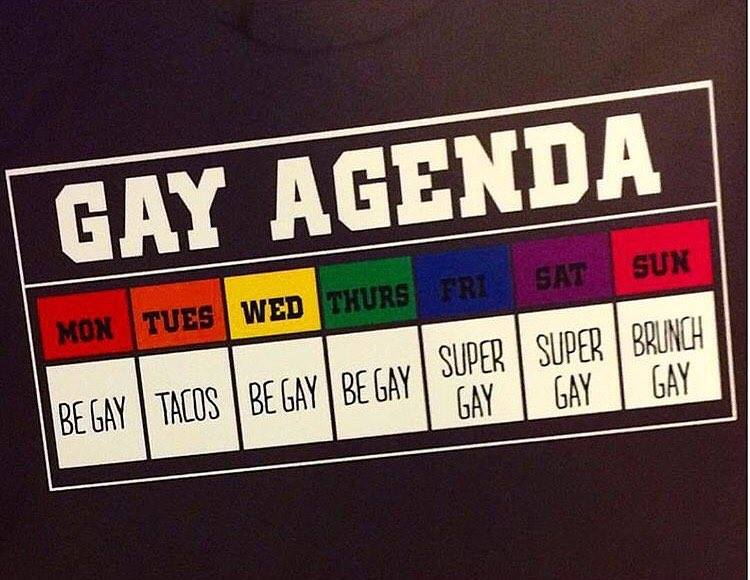 All wheaton labs residents are welcome/INVITED to join us for Taco Tuesday!
Contributions are welcome though not required.
Some times the best contribution is help in the kitchen.

At the Fisher Price House (FPH) at base camp.
--Dinner prep begins at 5 p.m.
--Dinner starts promptly at 6 p.m.
--Movie, show(s), or game(s) might happen after dinner.
Fair warning:  Paul and Jocelyn turn in to pumpkins after 9 p.m. so we ask that folks move to the library or otherwise leave the FPH by about 9.

posted 3 years ago
We've been having quiet, smaller Taco Tuesdays while most folks are gone for the winter, though with the bootcamp re-starting in February, that will mean larger feast nights again!

The basics we typically have include:

Usually, all of the basics (such as the above examples) are vegan, though we might have meat available, or cheese, or vegan cheese, or cow's milk yogurt to use as sour cream.

posted 3 years ago
Fair warning:  once in a while, Taco Tuesday turns into Tikki Tuesday (where pineapples and sweet potatoes are often involved) though we're still pretty happy with our Taco Tuesdays most of the time.

If you've been here before, we'd love for you to join us!

If a Tuesday night is too difficult (work schedules, sheesh!), we have tours scheduled on a few weekends and we will be having potlucks at 6 p.m. each of these nights:

posted 3 years ago
Tour for
September 29, Sunday
canceled do to weather

posted 2 years ago
For your taco entertainment TacoBot 3000