The RMH built in the tipi ended up cracking the core and had to be rebuilt. The new core follows the pattern of the RMH in Paul's office. They have continued to work on the cob bench and the plan is still to have Emily and Tony live in that through the winter until March. Paul and Jocelyn went up there and started a fire while they were out of town. It was hard to get going, possibly due to the severe cold they've been having in Montana--as low as -16F, and staying well below freezing for days. When it's below freezing, you can't build with cob. Now that it's been so cold, moving what looks like a loose pile of dirt requires a pick-axe to break up--it's harder than concrete!

What they have found out is that frozen cob looks and feels a lot like finished, set cob. After long firings, the cob bench started to get goopy. They thought the cob was set but actually it was just frozen. They are running a pocket rocket in the tipi to help dry out the bench. Tony really loves the pocket rocket "Simple, Easy, Quick, Warm." Paul notes that pocket rockets tend to burn up their down tube really fast--hey, that means there's metal going into the air (toxic), and the loss of materials is a bummer as well. Hmmm, perhaps a non-metal down tube would work. Until that issue is solved, Paul's not really happy with having a bunch of pocket rockets around.

When you're running a RMH, too much wood or wood that goes diagonally and intrudes into the burn tunnel will mess it up. You can see it if you keep an eye on the exhaust--it will go from clear to smoky black. The wood needs to go in to the feed tube perfectly vertical. Erica has a nice book that she wrote about best practices with burning stuff.

Another issues can be green smoke. If you see green smoke it's coming from something galvanized, and that's toxic stuff. Not welcome. At the tipi they had some issues with green smoke, and they think it came from galvanized hardware cloth that was added to some cobbish material as a structural aid. "Cobbish" is a mix of perlite, wool and heavy clay. Usually when you mix perlite and heavy clay for insulation you mix it such that will form a ball, but it "pops" when you apply pressure on opposite ends. The "cobbish" has more clay, and also the wool, and if you applied pressure to a ball of it it would squoosh instead of explode. Paul thinks the green smoke might actually be from galvanized duct pipe (there's a T of galvanized material early in the system) that's present after the barrel. His idea is that the first 5 feet should be stove pipe, to better tolerate the heat coming out of the barrel/bell. (Oops, yeah, that was the plan but it didn't happen.) Paul wonders if there is a way to form the ducting out of cob (ed. note: how about something that is designed to burn away? Strong enough to create that tube space in the cob, but flammable and more clean burning.) Even the stove pipe is painted. . . Using just cob would be grand. The laboratory has a really nice patch of land with sharp sand with almost enough clay to just build with right out of the ground. Lots of material for cob.

The original plan for the RMH in the tipi was to vent it out the side of the tipi. When Paul fired it up, the stove didn't seem "rockety" enough. The frozen nature of the cob mass was not helpful in getting things going. A secondary heat pump will help the air movement. This can be a vertical pipe that sits close to the burn barrel--basically a chimney. They have one of these in Paul's office RMH and it is working well. Erica wanted a chimney in the tipi, running angled along the wall out the top opening. So, they put the chimney in. . . and. . . it doesn't seem to work as well as the extended horizontal chimney that runs sort of downhill.. The mass is so cold, the exhaust gets pretty darn cold passing through it and so it "wants" to just slide (slowly) down the hill.

Next: the improved barrel gap! Tony was wondering if the barrel was the right height for the ideal gap. They used a cob ball on top of the heat riser to see how much room there was between the top of the heat riser and the inside top of the barrel. This showed less than 2" of space, which was sub-optimal. So, they raised up the barrel and this really seems to improve the burn. It seemed easier to light and it was more "rockety" when it burned. Paul talks about how a really sweet RMH just roars during a firing. When the gap is bigger, the torus of heat moves down, Paul thinks. Tony confirms that after raising the barrel, there was more heat coming from lower down the sides of the barrel.

The RMH in the office is working really well. They've been trying lots of things, because it's easy to modify and Paul is right there most of the time to watch it. They tried having two alternate exhaust paths, with a valve so you can switch between venting vertically and venting horizontally. However, when they start it with the vertical path, you just can't switch it to the horizontal path. The air moves past the theoretically closed damper. They have recently added an external air intake, so when it's really cold outside compared to inside it acts as a pump. Paul worries that there may be leaks in the ducting that is inside the bench buried in pea gravel. Having a second pump on the end makes him feel better about moving that exhaust along through the bench and out. So, they've built something that rather resembles the core and barrel on the front of the RMH. It's got an insulated riser and a barrel. It didn't work. It might be because the valve that should block the vertical chimney is not really blocking airflow out the vertical chimney. Tim is building a "guillotine" duct block for that vertical chimney and maybe after 100% blockage is achieved they can work more with an external pump. Also, the horizontal path out has two more 90 degree turns in it, and that makes it unfair as well. Another thing to do is make a better "damper-flapper."

The brick bench filled with pea gravel is nicely heated up, and it holds heat pretty well. The temp went from 70 degrees when Paul left to 56 degrees when he came back early in the morning. This in a rather uninsulated and non-air-tight space, so pretty good performance.

COMMENTS:
Mikael Long
Posts: 54
4
posted 6 years ago
Hey there I am Mikael long from asheville nc I have a suggestion for the feed tube getting blocked by fuel being side ways in the burn chamber. I use a Mchannel, a grill grate which is bent into an m like shape and fits down so it looks like an M from above the burn chamber, with the top of the m faceing the barrel. To Paul's question about a burnable tube how about cardboard tubes. Paper mills and fabric mills and lowes sell some for concrete forms.Many places trow away old tubes that vary in size. Thanks for this forum I am learning a lot and live the resource. Hope my ideas are not a newbie reinventing the wheel.
image.jpg 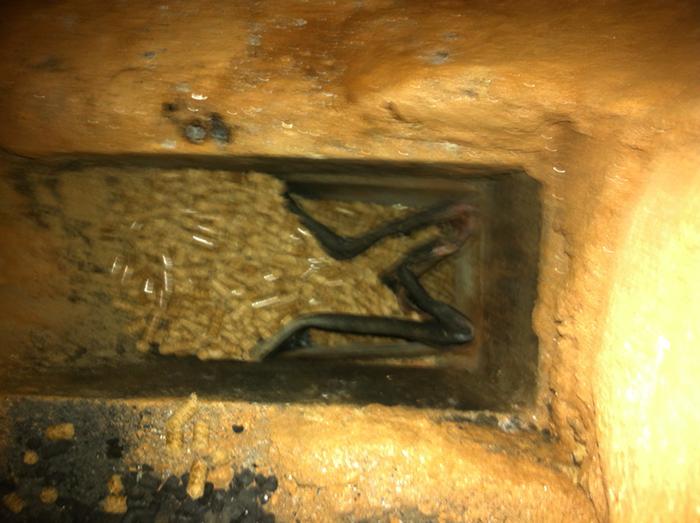 Most problems on earth are caused by humans worrying about little pieces of green paper. Paraphrasing Douglas Adams
I don't care if it takes a compass, pick-axe and night vision goggles to find her. Paraphrasing Steve Martin in L.A. Story

Laine MacTague
Posts: 24
2
posted 6 years ago
I was thinking about trying to build one either using some sort of tubing as a FORM for the exhaust tube through the cob, but pulling out the form once the cob is able to hold its shape. OR, using sonoform tubing & just letting it burn out with time. Another thought was to use concrete or clay pipe. Anybody been here / done this yet?

Laine MacTague wrote: Another thought was to use concrete or clay pipe. Anybody been here / done this yet?