posted 1 year ago
Here is my knife sharpening BB. Blunt tearing of an envelope. Sharpening set up and two stages of sharpening and honing of one of the knives and then the final sharp cutting of the same envelope.
BeFunky-collage.jpg 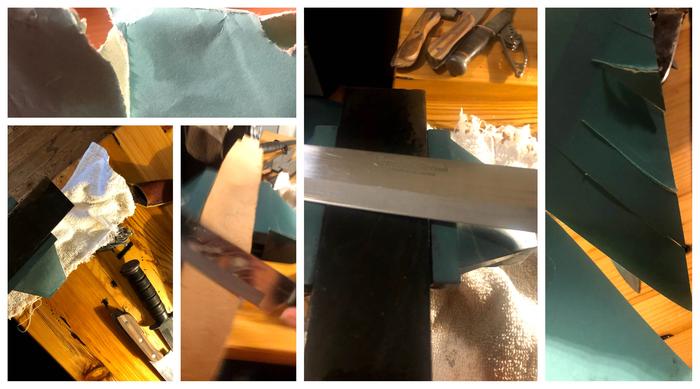 Could you provide:
- pic of the sharp knife having cut halfway through a piece of paper

key part being the pic of the sharp knife

posted 11 months ago
Approved BB submission
Here is my submission for the Tool Care - Sand - Sharpen a Knife BB.

I pulled out five knives to get some practice after watching the Knife Sharpener video.  He inspired me to spend more time on each knife than I probably ever have.
This BB is for the Chicago Cultery paring knife as it had the biggest (most dramatic) change.  When I first tried to cut the paper, the knife pushed the paper out of the way and did not cut or tear the paper.
Also, I used water and dr. Bronner's soap to wet and clean the stone.  I did not use the whetstone oil that came with my stone.

See where I lived this summer to learn about permaculture: https://permiemilkmaid.wixsite.com/my-site
My journal: https://permies.com/t/160807/Stone-Baerm-Adventures

♪ Yes, and joy was just the thing that he was raised on, Love is just the way to live and die...♫

Bill Anderson
Posts: 46
Location: Hartwell Georgia USA
26
2
posted 5 months ago
Do we get any points for the first few badge bits in Sand or only the last few?
Sharpen a knife
Sharpen a hatchet
Sharpen a chainsaw chain
Sharpen clean and oil a shovel
Clean a shop
Make a wedge style handle
All these have no points? Am I missing something?

Zone 8a Handicapped Gardener with crutches, sometimes a wheelchair

posted 5 months ago
Approved BB submission
First I went through the kitchen and looked through all the kitchen knives, I thought that the knife we use the most would be dull as it isn't cutting as well as before. That sliced through the paper, so I went through knife after knife cutting paper until I decided to get some of my mora knives and then I remembered that the knife marked in the picture is one I've never sharpened.

I got the knife from a drawer filled with old rusted knives that my father had rescued a long time ago. I had removed all the rust but it had much pitting in the blade and the edge was gone. I guess I just put it in my toolbox and used other knives.

I'm going to use synthetic water stones to sharpen the knife.
Without a cutting edge it was very difficult to even cut the paper at all.
With the result of cutting the paper I decided start on a even coarser grit stone.

Cutting paper easily.
The knife has an edge again after many years without one.
There is still some small pitting left but I guess it will be gone next time I sharpen it.
I used the diamond plate to flatten the stones and remove filings, so my stones are ready for the next tool.

I have to agree with the man in the video that dulled edged tools are more dangerous to use. If I have to add a lot of force when using an edged tool, I stop for a moment and think perhaps I should sharpen or use a another tool instead.
If I know I'm not going to use or store a tool for a long time I usually wipe it down with linseed oil(boiled or raw) so it will not rust easily.

Bill Anderson wrote:Do we get any points for the first few badge bits in Sand or only the last few?
Sharpen a knife
Sharpen a hatchet
Sharpen a chainsaw chain
Sharpen clean and oil a shovel
Clean a shop
Make a wedge style handle
All these have no points? Am I missing something?


All the tasks on the Tool Care Sand list are required so they don't need points.  The Bike maintenance one is broken up into points so you don't have to do all of them.