PEP BB woodland.sand.deadchain - felling a dead tree with a chainsaw

posted 1 month ago
I dropped a 6” diameter (not measuring the bark) dead Ponderosa Pine tree with a chainsaw.

Pictures include:
1) dead tree with the wedge notch cut
2) tree on the ground
1-notch.JPG
2-down-limbing.JPG

David Huang
pollinator
Posts: 406
184
posted 2 weeks ago
Taking advantage of a beautiful fall day harvesting future firewood I decided to also do some BBs.  This one is my submission for cutting a dead tree with a chainsaw.  I'm using a battery powered chainsaw to drop and cut these trees into large sections that I can haul up closer to the house where my corded electric chainsaw can be used to cut up further.  Anyway, the tree I'm cutting down for this is a dead ash tree killed several years ago by an infestation of the emerald ash borer.  Almost all the dead ash trees have been sending up suckers from the still live root systems in a sort of natural coppice.  In cutting this tree I had a secondary goal of saving the largest of the new shoots to hopefully become the new trunk for this tree valiantly striving to live on.  I believe I managed to save the new trunk, though it did get some damage in the process.   Time will tell if it survives.

I'll include 3 images.  One of the tree before the work.  One after I have the wedge cut out.  The last of the tree dropped exactly where I was aiming for.

Oh, a couple added notes.  This tree had a very thick hearty vine of poison ivy growing up it.  Earlier in the year I took my bow saw and cut out a 1 foot section of it to kill the vine, letting it sit all summer to be fully dead and not oozing itchy juice when I go to cut it!  This tree was also one of the bigger ones in my stand of dead ash with a risk for falling on my house.  So I had to make certain to drop it before a wind storm did, and make sure to drop it in the direction I wanted!

You are welcome to check out my blog at http://www.theartisthomestead.com or my artwork at http://www.davidhuang.org
My latest blog post is my book review of Building a Better World in your Backyard and a second post with book discussion questions. 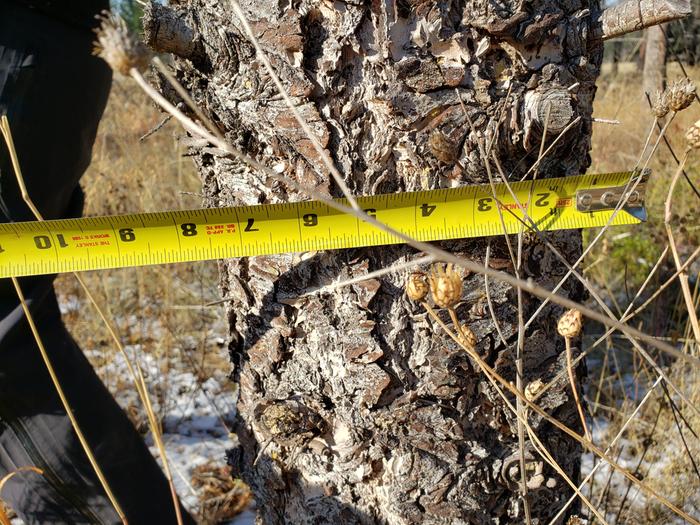 Video of me doing chainsaw dance (sorry it's 7 second too long!):