How do I bring a contaminated pond back to life?
It sounds like your pond is in need of some fast growing native water plants which will be able to grow very fast to consume a lot of nitrogen while also providing functional value for wildlife.

Wetland plants (in fertile areas) tend to grow very fast so I am only making two suggestions which I have already confirmed to be native in Kentucky and so won't cause any issues with invasiveness.

Nelumbo lutea is the native lotus with yellow flowers (not to be confused with the Asian lotus which may have white or pink flowers.  This is a large plant that will cover a lot of "ground" with lots of shade being produced by its umbrella of leaves which will help inhibit algae growth in addition to removing nutrients from the water.  A bonus is that this plant makes edible rhizomes as well as seeds both for humans and wildlife.

Sagittaria latifolia is known as katniss, wapato or arrowhead.  This plant will also grow and spread very fast in high nitrogen water and although its leaves aren't as large as lotus they have the remarkable habit of being very narrow in low nitrogen water and very wide in high nitrogen water.  Not only will they consume lots of nitrogen, but in higher nitrogen water their leaves will also provide more shade than in lower nitrogen water (algae needs the sunshine to grow).  Additionally, it will function as an indicator for how much progress is being made.  If you succeed in lowering the nitrogen levels you will see its leaf shape actively trending narrower on younger leaves.  Like the yellow flowered lotus, this plant also has an edible portion.  It makes starchy overwintering corms each fall which can be harvested (by stirring the mud so they float) and eaten as a vegetable.  It is also food for wildlife.   While this plant does grow anchored in the muddy pond bottom around the edges where the water isn't too deep, it can also be just thrown into the water without planting which will allow it to float around where the water is too deep for either it or the lotus to grow.

To summarize, these two plants will both combat the algae in two ways; by significantly reducing the amount of sun which can reach the algae and by consuming its food source.
show more
1 month ago
ponds
What are Shawn's 'three brothers'?

Shawn Jadrnicek wrote:One of the improved varieties is called LA85-034 and is reported to be the best.  I think that's the variety edible landscaping in VA is selling.  I've had some softball sized tubers from this variety.

I contacted Edible Landscaping to ask if they knew which LSU clone they were growing and got the following response:  " I do not know. In fact mine will be seedlings of one of the 50." 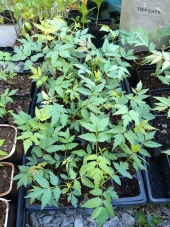 John Skaggs wrote:
Thank you for the offer, Johann!  Would be awesome to compare a Flamingo clone.  Let me know.

Hey John,
It's a good time for shipping now that the Toona here is about done entering dormancy.  Send me a "purple mooseage" with the shipping address you want the T. sinensis 'Flamingo' sent to.

Thanks,
Johann
show more
2 months ago
perennial vegetables
Comfrey Bocking 4 and 14: Clarification Please?
Kathleen,
If your comfrey was grown from seed it would not be any named variety including the Bocking selections. It is most likely the straight species known as "common comfrey" (Symphytum officinale).

If one of your comfreys was not originally grown from seed then you could with very careful evaluation and observation determine if it is also common comfrey (which will occasionally produce a small number of seeds) or one of the hybrid "Russian" comfreys which should never produce seeds under normal conditions.

I say the common comfrey only occasionally produces seeds because it mostly attracts bumble bees which actually pierce the side of the flower to access the nectar and in doing so are very inefficient as pollinators.  That means that you won't always find seeds on your common comfrey so don't assume not finding seeds right away means it's a Russian hybrid.  Over the years I've found that the common type does not spread aggressively by seed and in my experience is still most often multiplied (where I am) when soil disturbance fragments the roots.
show more
8 months ago
plants

Thanks for the update!  It'll be fascinated to find out if there's any credibility to the belief that the green leaved types are bland and the red ones best flavored.  The only way that would make sense being as both types can emerge from the same batch of seed would be if the chemical compounds responsible for the color itself were directly related to the desirable flavors.

After having tasted the named clone 'Flamingo' and finding it far superior to the specimen I had bought from an edible plant nursery I decided to start propagating 'Flamingo' for my own small specialty nursery in Washington.  Since I'll have a lot available later this year I was thinking maybe I could send you one to add into your tasting line up for comparison with your other seedlings.  I already know 'Flamingo' tastes good, but it would be really cool to see how similar or different it tastes compared to other good tasting seedlings.
show more
9 months ago
perennial vegetables 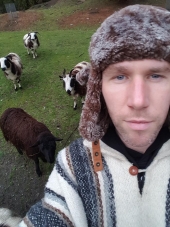 Western Washington MFM
I just realized there was a "singles" section on this site.

I'm (gay male, born 1985) in Western Washington out in rural area south of Seattle, East of Tacoma.  Every once in a while things start feeling isolating and lonely, but mostly I'm okay out here.  I'd love to get to know other people for "friend dates" or real dates.  I'm always happy to find someone who wants to go for a hike.  It's a nice casual way to hang out while spending time observing natural ecosystems which I find pretty fulfilling.  I'm very attached to my current location (no interest in moving).  I am farming with a range of livestock and have been reclaiming land from blackberries and planting trees.  I'm also at the beginning of year 2 in my business (sustainable plant nursery).

Anyways, I'm not sure what to expect, but I figured I'd dip my toe in the pool.
show more
11 months ago
permaculture singles
growing toona sinensis from seed
Regarding flavor:  I've found and watched a number of videos showing people cooking with Toona sinensis in various Asian countries.  The common thread that all the "in the know" people tend to employ is that they all blanch the leaves in boiling water briefly before continuing on with the food prep.  I suspect this is a standard preparation step for a reason.  It's challenging to adopt new plants if we don't also have access to the connected cultural knowledge for how to use them.
show more
1 year ago
trees

Chinese Toona/Red Toon/Fragrant Spring/Garlic and Onions Trees
Hi John, did you have a chance to taste any of the seedling leaves before the season ended to compare flavor qualities?  I currently have two different Toona sinensis trees and find that although the flavor is similar between the two, the palatability is vastly different.  The one I purchased at a high price from an edible plant nursery I consider to be inedible due to an "off" flavor that reminds me of mold.  The second tree which I purchased from an ornamental plant nursery at a very reasonable price doesn't seem to have any of the "off" flavor, but all of the good flavor that people claim this species has (umami & oniony).  I'd love to know more about your seedling batch.
show more
1 year ago
perennial vegetables