John C Daley wrote:
- tax is the price of a civilised society.
.

Wait what? ~This~ is a civilized society? Oh man, did I ever land on the wrong rock!

I think things took a wrong turn for everybody when housing ceased to be about... housing people... and became about money. My extraterrestrial outpost and permaculture pals in Trout Lake say it thusly: ‘if it isn’t good for everybody it isn’t good’.

My permie story is that I worked super duper hard to develop a permaculture urban farm on a landlord’s property only to have him take an unsolicited offer from a developer after 5 years  and plow the whole thing under! Made three 1 million doll hair condos on the land I cared for! Took me nearly 4 years to stop being heartbroken and get on with it only to build a new set of gardens (also on a ~new~ landlord’s land) and now we are finding we must be moving along again, as this too shall be sold to the higher-than-us bidder, though this time hopefully we’ll launch to a place that we will ourselves own - with the help of our credit union mortgage.  (Even a CU is not our friend really, I know, but I will pretend for now...)

So here I am 11 years later from that heartbreaking plow-under and many gardens built on this Earth and I always have to walk away.  🥺🌱😱
And for want of money, not of skill, not of passion, not of labor, not of heart.  But munney.

Honestly I have yet to see it.

I volunteered extensively at a cohousing community to learn permaculture and at the end of a 5 hr day in the garden they still charged me cash on the barrelhead (which I truly could not afford at the time!) if I wanted to share in the community meal I had helped to harvest for that night’s dinner. I mean I learned a LOT of technique, stuff I use on my own gardens now, well, my landlord’s gardens  that I eat from I should say... but... in the end I soured on the cohousing/community ideal because, it really wasn’t the ethic that I had in mind, once I experienced it first hand.

Maybe my own land exists out there? Maybe gardening is ok as a solo sport? (I have long said and been convinced it wasn’t intended to be such but... I alone do the weeding and seeding and tilling around here! Family of four and only Ma has dirt under her fingernails!)

Maybe civilized society exists? I am not discounting the possibility. Optimism grows most plentifully in *my* gardens, perhaps my most bountiful yield in fact! But still I am still a seeker for that civilized bit. (Pardon my while I optimize my edge. 😉 Or is that edginess? Maybe I misunderstood that principle...)


show more
1 year ago
homestead
Looking for like minded folks/community near Olympia
Hi! I live in nearby Puyallup and my family of 4 is looking to (finally) buy our own land in WA  after developing permie-minded gardens on 2 different landlord’s places since 2009.  I also used to volunteer extensively at the Songaia cohousing garden in the 2011-2012 period, which is where I learned a lot of my permaculture technique through their association with the then-titled SIP  (SnoIsle permaculture network) Anyhow, if you know of any good opportunities for land and a small shack-like abode out your way can you let me know? We are looking all over the area but usually word of mouth seems more effective!
show more
1 year ago
cascadia

Ways to use bamboo, dumbed down to my skill level.
Here are a few of my bamboo contraptions

1) Torii Gate made from giant bamboo and a trimmed rhodie branch and cool beer can art I used finish nails to attach to a small cut from another wood project.  Torii gates denote the passage from the mundane to the sacred.  I loved these when I was in Japan and was also inspired to try to incorporate some of the ideas from the book ‘Permaculture, A Spiritual Approach’ by Craig Gibsone and Jan Martin Bang

2) trimming from the giant bamboo made a little wind chime thingy for my Buddah bench corner.  Not much is plantable here due to big doug fir roots and shading, but it made a good ‘people care’ zone and broke up the stuck feeling of this fenced corner.  Hubby made the bench out of reclaimed materials (stump and nice board from neighbor’s trash pile) and the pagoda and bell were leftover catering buffet decor I inherited when the pandemic shut down all the catering operations and the decor was ditched.  Small cedar is in a pot under the ground (so it can move if needed) and a dug up tree root became the cool giant sized mulch around it.  Total repurposing of all componants!

Life Without Plastic
I also was gonna say that since plastic seems to be on everything, I have done some cool stuff with labels that are on things.  I generally detest labels a d take them off if/when I can and just store things in mason jars when possible.  But some of the label art is pretty nifty and so not unlike a funky ransom note, I cut these cool bits out and tape them together to make fridge art stickers.  Here are a few examples:
show more
1 year ago
buy it for life 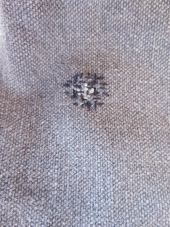 repairing reusable bags
I repaired some of mine last year in March when it seemed like ‘doing something while simultaneously being asked to do nothing’ seemed like a worthwhile endeavor.  I got the outdoor company bag for free as a prize during training for them but it needed a patch and new handles and I did some subtle embroidery for fancy factor.  The cat one was from a friend’s yard sale leftovers and it needed a reboot on the paint job and handles and the embellishment admittedly got waaay outta hand one quarantine morning.  But they are sassy and I love them!
show more
1 year ago
repair 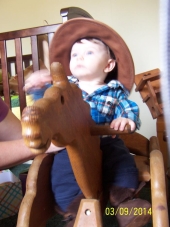 Best thing you ever pulled from a dumpster or out of someone's garbage?
So my husband used to work on Hollywood movies and he once made a film with a scene that took place in a forest of burned trees, ash raining down.  So the location scouts found a real landscape of this type (sadly abundant right now in the US) but in the end decided to make a fake version on stage so it looked ‘even better than the real thing’.  🙄 Well my husband had to go buy a $5000 piece of light grid fabric for the effects and in the end only 2 minutes of filming survived to the final cut.  And that $5k light grid was headed for the garbage! Easier to throw away, they said! So it came to me as my husband was charged with ‘disposing of it properly’... ie: wife will repurpose this, I just know she will! Since then (this happened in about 2007 or so) I have made chicken pen tarps, various sized cloches, etcetera, basically all weird garden contraptions that I design on my own, taking cues from the ingenious Elliot Coleman and his work 4 season gardening in Maine.  So here is an example, this is my current cloche, made with plastic visqueen that was packaging for some furniture we purchased, sewn together with the light grid pre-grommeted for end caps.  PVC forms the arcs of the structure, which are encased in hems I sew on my basic sewing machine.  In a recent windstorm sporting 45mph steady winds with occasional gusts up to 60 (90mph clocked at the top of the local ski area) it stood up beautifully, literally did. not. budge. and all my tasty greens inside (redbor kale, broccoli dreaming of spring, electric lights chard, rocket arugula and simpson black seedes lettuces) were perfectly protected from the onslaught.  So, yeah, my 50’ x 50’ Hollywood Movie light grid from last decade has been a wonderful addition to my ‘gardening supply squirrel stash’ that has kept on giving for years.  “Disclaimer; No fake burned out forests were harmed in the creation of this repurposing” 🤣
show more
1 year ago
meaningless drivel 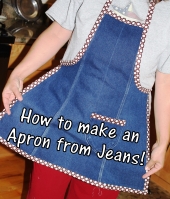 Sew your own apron
So my little ‘pockets for people who sometimes wear pants with no pockets” apron began its life in roughly 2008 as a hardware store worker apron.  I then used it for holding shears in the garden etcetera and it needed some repairs from holes from sharp stuff, so then those patches kept getting fancier and fancier until this piece de resistance came to be.  I really love it because it has totally stood the test of time (with much maintenance!) and in its current instanciation makes me feel like I am a magician helping magical things to happen in my garden whenever I don it! Its a little bit Mrs Whosits and Whatsits with the eyeglasses patch meets Harry Potter in the greenhouse training to repot screaming plants with some solid sparkly 90s kid thrown in.  And it does its job, every time!

Life Without Plastic
I love your single use plastic refusal replies Brian Campbell! When I was 14 years old deep behind what I call ‘Life Behind the Orange Curtain” (growing up in Orange County, California) I did a monologue play where there was a line that said, “God gave us plastic so we’d know what the everlastin’ really was.... see if there’s plastic there’s surely eternity.”  I love that line, it really puts the obtuse  single use mindset into perspective, something that most people seem to struggle to do.   So I love that line, but  I love being able to move beyond the everlasting (world of plastic) even more!
show more
1 year ago
buy it for life
Buried Roofing Shingles
Thank you so much for your reply! I like your idea.... small steps.  Think big, start small.  In a similar vein to ypur steadfast contractor bag haul outs...  just today I hauled out (another) large drybag of garbage from my neighborhood forest where I like to walk.  Its taken 5 bags so far plus rolling a tire down the block (neighbors thought I was loony!) but I am beginning to see and feel a difference in the forest with less garbage strewn about, especially the micro trash.  More yet to go, but I there is time... perhaps I will take the same approach with the asphalt, not sure but I will consider.  Your coal mine under the pond, wow! The clean up job humanity is currently facing is of epic proportions.... a small section at a time is a more reasonable way to consider these ‘insurmountable opportunities!’, right?  🤓  Anyhoo, thanks for your heartfelt reply, I truly appreciate your idea for revisioning a solution to the problem!
show more
1 year ago
soil