Trying to start an intentional community MI
Check out this post. They’re my dear friends as I was just the midwife for her newest baby in June. They are near Bangor, MI. Blessings.

This reply is specifically to Leesha, who is near Grand Rapids and currently looking for something close.
show more
1 week ago
intentional community
New website discussing Christian community
Hey Gilbert, I think you’ll be very interested to read this article and to learn about the GoodLands project; and anyone else here interested in how a Catholic permaculture activist is mapping the land holdings of the Church to effect change in usage, addressing both climate change and humanitarian problems.

NW Montana S Gal Gifted w/2 Green Thumbs + Yrs Of HmSteading/Permaculture Exp
There is a couple wanting to open their home/land to form a community in the St. Ignatius area. If you are open to or practice a vegetarian lifestyle, are sober, and wanting to live in eclectic spiritual community with others (share land/different dwellings), let me know and I’ll put you in contact with them.

My family and I just visited them earlier this month and we are trying to now get our house ready to sell in order to join them in this vision. Montana, and the Mission Mountains, are special places. I wish you well.
show more
7 months ago
permaculture singles
Once covid ends (List what you will get to do)

That’s awesome, Pete. I like looking through the old music threads and often think you have the best music taste on here. I myself was looking forward to my first ever Tigran Hamasyan live performance last May. I hope he can leave Armenia for the US this year!
show more
8 months ago
meaningless drivel 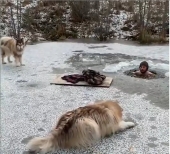 Have you acclimated to a colder climate?
I grew up in the Colorado mountains and love winter but I also love a hot summer. The coldest I ever remember being were those few winters I spent in Chinese metropoles where it was wet, cinder block insulation, and you wouldn’t see the sun for weeks. I recommend investing in a quality pair of snowboarding pants for your outer layer and wearing those everywhere. As I type I’m currently wearing the only pair I’ve ever owned I bought when I was 16 (20 years ago): men’s Salomon’s. I don’t know about fashion but men’s clothing and boots are warmer and seem to be more practical, in my experience. What also kept me from freezing in China that I would love to see in the US (but doubt I ever will) were the public bathhouses. People would stay there all day and cleanse themselves of pollution and cold. Of course there are hot springs in the western US but I’m talking places to go in the middle of a big city, accessible to all.
show more
8 months ago
meaningless drivel

I'm curious... What's the best change you made that reduced your garbage?
Ask relatives to kindly refrain from buying our family presents or (year round) other stuff for which we don’t have a need.

That’s the biggie and a work in progress.

There's a fortune hidden somewhere in the Rocky Mountains
https://www.outsideonline.com/2419429/forrest-fenn-treasure-jack-stuef

There is a book, ‘Chasing the Thrill’ by Daniel Barbarisi coming out next year about this decade-long hunt, but the finder will not reveal its precise location (somewhere in Wyoming.) A quote from the article, also written by Barbarisi

Still, listening to Stuef talk about it, he makes it seem so attainable, so simple: that the key was really just understanding Forrest Fenn. Stuef hunted solo, never discussed his search with others, stayed away from the blogs after his initial looks at them, and tried hard not to get caught up in any groupthink. He did his utmost just to focus on Fenn’s words and primary sources, and understand those as best he could.

“I don’t want to ruin this treasure hunt by saying it was made for an English major, but it’s based on a close read of a text,” Stuef says. “I mean, that’s what it is. It’s having the correct interpretation of a poem. I understood him by reading his words, and listening to him talk over and over and over and over again. And seeking out anything I could get my hands on that told me who he was.”

And here is the essay written by Steuf, previously anonymously published on Medium:


https://thefinder.medium.com/
show more
8 months ago
meaningless drivel
Two lines that rhyme about the post above
Brooding over the patriarchy’s myopia
We rebel by creating a permie utopia