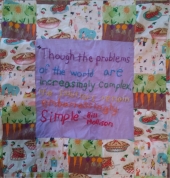 Earth Friendly Gifts for a Baby Shower
Thank you so much for this! My husband and I are planning to open the option for babies very soon, but I've been consistently worried at the thought of well-meaning yet unwanted gifts.

We're planning on naming ceremonies rather than baby showers (I recently learned you're only supposed to have one of those, not one per kid), and though we want to make an emphasis that it's not about gifts, this list, I'm sure, will come wonderfully in handy, especially the car seats!!
show more
2 months ago
kids

hand sewing stitches and resources
Most of my tips would be from Bernadette Banner and Abby Cox videos, but I think one of the biggest from those is using good needles. Abby goes over how important it is to have decent length needles with smooth eyes, i.e. not the kind you'll find at Joanne's. Needles from England and Japan seem to be of the best quality, and the eyes are larger and smooth, which make them easier to thread. One gal uses embroidery needles for sewing, which are longer than sharps and thus can be easier to handle.

Burnley and Trowbridge is a site with really good thread, including old-fashioned 2-ply. Abby suggests using only strong, smooth silk or linen (the linen always needs to be waxed, but it's generally the only thread that does). I've read/heard that keeping a shorter length of thread, only about one arm's length, makes it easier to handle and less likely to tangle. I'll eventually try not even cutting a length and just sewing straight from the roll, because I'm curious about it and the method I use doesn't require knotting the thread, it's just a single layer rather than doubled.

A recent video I watched (from Bernadette Banner, her newer "I sewed a pirate shirt" one) mentions that before the Victorian era, the stitches weren't as small or neat, because their attitude was more "get the job done" than "make it pretty", and since I'm hoping to one day sew a full wardrobe for myself I think I'll follow the 1800's example instead of the Victorian, because I know I won't have patience for 2mm back stitches, haha. Just a reminder that Victorian manuals are probably going to be really strict about stitch sizes, when it's not actually necessary.
show more
3 months ago
sewing

I use some extra rings from the mason jars on the pot's bottom.  Works great (pun intended) and provides good use for some of the rustier, nastier old rings while keeping the jars off the bottom.

That's such a good idea! Thank you! I've been saving the rings from some really old cans but I've been having trouble figuring out what to do with them. Now that I'm planning on practicing canning this fall/winter, this will be awesome!
How did you attach them to the bottom/each other? My first thought is soldering.
show more
3 months ago
food preservation