Ian Sa wrote:in the email I recd it asked about ideas for a greenhouse in Montana.

If this the correct thread AND IF you are looking for ideas I recommend watching
the youtube  - search
Growing Oranges in the Snow in Nebraska.

possible kickstarter for wofati greenhouse project
in the email I recd it asked about ideas for a greenhouse in Montana.

If this the correct thread AND IF you are looking for ideas I recommend watching
the youtube  - search
Growing Oranges in the Snow in Nebraska.

"I recently received the following question regarding EMP effects: “What will happen to vehicles with electronic ignitions, a Chevy with an ignition module, but they are not hooked to a battery, with no path for electricity to follow, can it do damage? There may not be power on the grid, but what about a generator? Can a drill that was not plugged in still be able to run?”

The energy from the EMP pulse wave will melt down the transistor ‘junctions’ within semiconductor electronics.
...

Will your drill stop working? Maybe. Does it have any electronic control in it other than its basic switch and coil winding?

Will your generator work? Maybe. All previous caveats and questions apply… Most all generators have electronic controlling circuits in them.


Also know that electronics are embedded in nearly everything that we use today."

The clippings form the article above imply that coils are not burnt out. Electric generator without electronic controlling circuits in them will work.
show more
9 months ago
alternative energy
electric generator powered by hot air /steam
HI SB.

I would certainly like to go off-grid one day. But time and money don't allow for it now.

I am working on making the money for a green energy invention, Currently I have neither time nor money to make my own self-suffcient place in the country.

I live in the city, am renting, and can only do the small things I can. I can't move as I must live close to my elderly mother to help her.

Thanks for sharing your thoughts on a hide-a-way!

I did not know
"a backup generator also has coils of wires and would also be destroyed, the engine mechanically part of it would still work but the electronic and coil of wires would be dead, "

I guess I'll have to read more on EMP pluses. I had only thought chips were gone (do to fine wires in them). So I have read that cars built pre -chips would still run. Am I correct in understanding you in that because cars have alternators and coils (on the starter) they would not run either?

Certainly I am out of my depth to discuss high pressure or low pressure Stirlings - Phillips built on in 1951 I would imagine someone could duplicate that.

I did find a link Wood fired electric generators:
https://www.alibaba.com/showroom/wood-fired-electric-generator.html

Thanks for your thoughts.

I am not set on hot-air - read my post to David.

re:"I see hot air (Stirling isn’t technically hot air) or Stirling as inefficient due to all the things required to build a setup, and then further to get to the correct rpm to run a generator head because the rpm of the engine likely won’t come out at the 1800 or 3600 needed for generation."


see https://en.wikipedia.org/wiki/Hot_air_engine
"Stirling patented a second hot air engine, together with his brother James, in 1827. They inverted the design so that the hot ends of the displacers were underneath the machinery and they added a compressed air pump so the air within could be increased in pressure to around 20 atmospheres. It is stated by Chambers to have been unsuccessful, owing to mechanical defects and to “the unforeseen accumulation of heat, not fully extracted by the sieves or sin ill passages in the cool part of the regenerator, of which the external surface was not sufficiently large to throw off the unrecovered heat when the engine was working with highly compressed air.”

"The term "hot air engine" specifically excludes any engine performing a thermodynamic cycle in which the working fluid undergoes a phase transition, such as the Rankine cycle. Also excluded are conventional internal combustion engines, in which heat is added to the working fluid by combustion of fuel within the working cylinder. Continuous combustion types, such as George Brayton's Ready Motor and the related gas turbine, could be seen as borderline cases. "

Around that time, Philips was seeking to expand sales of its radios into parts of the world where grid electricity and batteries were not consistently available. Philips' management decided that offering a low-power portable generator would facilitate such sales and asked a group of engineers at the company's research lab in Eindhoven to evaluate alternative ways of achieving this aim. After a systematic comparison of various prime movers, the team decided to go forward with the Stirling engine, citing its quiet operation (both audibly and in terms of radio interference) and ability to run on a variety of heat sources (common lamp oil – "cheap and available everywhere" – was favored).[34] They were also aware that, unlike steam and internal combustion engines, virtually no serious development work had been carried out on the Stirling engine for many years and asserted that modern materials and know-how should enable great improvements.[35]

By 1951, the 180/200 W generator set designated MP1002CA (known as the "Bungalow set") was ready for production and an initial batch of 250 was planned, but soon it became clear that they could not be made at a competitive price. Additionally, the advent of transistor radios and their much lower power requirements meant that the original rationale for the set was disappearing. Approximately 150 of these sets were eventually produced. 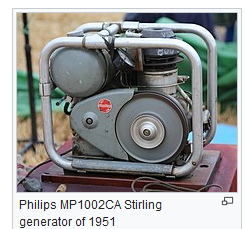 
I know they use Sterlings  in CSP (concentrated solar power) where they have a field of parabolic dishes (about 15 ft is diameter) and generate electricity.

re wood gamification and electric starters - see reply to David

Ian Sa wrote:I would like some help in finding a wood burning electric generator. The generator could be powered by hot air or steam.  No computer chips in it. (re EM Pulse). Many thanks in advance.


Ian, based on my reading I would say unless the generator happens to be running when the flare or emp occurs it should be fine. Taken one step further if the pulse was strong enough to short out a magneto in an internal combustion engine. The power generation side of the generator would also be affected whether it was turned by steam or air... While steam might seem like a good solution the boiler part of the equation is always overlooked. boilers are easy to build but hard to build safely. A boiler failure can be a catastrophic deadly event. Sterlings are interesting but while they are THERMALLY very efficient the amount of energy they can transfer from heat to shaft power is quite small... After much experimentation I settled on charcoal gasification to run small internal combustion engines as the most efficient solution for the DIY builder.
Cheers,  David

Reading further in the wikipedia link, it appears that a Swedes have powdered submarines with them (Sterling). I'm not saying sterling or other hot-air, but the picture I showed was of 1951 electric generator built by Philips and powering an portable generator (small power I would guess and they only made 30).

But getting back onto what I am looking for:
1. I want something with no chips in it.
2. This is for when the grid is down - for the count
3. I was hoping there is a commercially sold one.

My understanding is that all generators - connected or not are burnt-out. That is the ones powering the local water system, the gas lines, and on and on. All the cars of the last 25 years are out of commission - all their chips are gone. (connected or not).

I have delved into the rabbit hole on pulses - and it watched many Youtubes. In one they said that even if you line a room completely as long as there is a hole in the lining (e.g.) your wiring - or as you say you plug in - your computers are gone. My conclusion was that all of this is speculation and people talking through their hats. However, the only way to know is to build a EM pulse "gun" (from some microwave ovens or buy one) and zap your car/generator/whatever and see if it is toast.

So that is a rabbit hole and I'll just avoid anything with a chip in it.

Probably an old gas lawnmower with a pull-start (you know the handle with the rope) - or old outboard engine for a boat - with a pull-cord would be chip-less. Anything build prior to when they had chips in things (say 1960's ?). Anything with a push-button electronic start is probably a "no-go"

As to the power source it could be many things I don't really care - except that I am a strong environmentalist and so I'm going to go green.

My reading on hot-air engines are that they are not "power-dense" that is for lots of power in small size (like a car) they went to internal combustion and interest was lost in hot-air engines.
I short of time. I don't want to build one unless I have to.

On efficiency, internal combustion engines waste a lot of energy in heat production (like 75-90%). Wood gasification is only going to get part of the energy of the wood -(correct?).
show more
9 months ago
alternative energy
electric generator powered by hot air /steam
By the turn of the millennium, Stirling engines were used in the dish version of Concentrated Solar Power systems. A mirrored dish similar to a very large satellite dish directs and concentrates sunlight onto a thermal receiver, which absorbs and collects the heat and using a fluid transfers it into the Stirling engine. The resulting mechanical power is then used to run a generator or alternator to produce electricity.[41]
show more
9 months ago
alternative energy