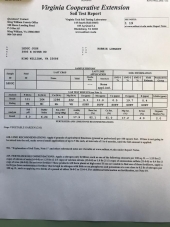 What does this soil test mean for a no-till vegetable garden?
Josh,

I am not very familiar with Broomsedge, but there has been some research (https://warren.ces.ncsu.edu/2019/03/how-to-get-rid-of-broomsedge-broomstraw/)  showing that application of lime and/or phosphorous can temporarily change the soil chemistry enough so Broomsedge has less of an advantage on a given site.  With that said, application of lime and/or fertilizer treats the symptom of invading Broomsedge but will not solve the problem.  Repeatedly cutting a field for hay and exporting the bales from the field does not allow for proper stimulation of the plants by grazing, exports a great deal of carbon from the soil system, and leaves the soil with little cover.  Occasionally cutting a field for hay and exporting the hay to another location is not usually an issue, but doing so year after year will typically result in a decline in soil health and plant species composition.

Plant species composition in a pasture can be permanently improved and maintained by proper grazing.  Proper grazing involves the grazing animals removing no more than half of what has grown at the time they graze and then allowing the plants to fully recover before being grazed again.  This means the animals must be confined to a small enough area at a time so they bite ALL of the plants, but do not remove more than half of what is there at the time of grazing.  To do this, the animals must only be allowed access to a small area at a time, usually only for a few days and then moved to a new area.  Portable electric fencing is a great tool to accomplish this.  If the livestock are allowed access to the whole pasture for an extended period of time they will only bite the plants they like and return to bite them again and again.  This results in plants that die out from not being grazed (and stimulated) and plants that die out from being grazed to death without time to recover.  What is left are undesirable plants (such as Broomsedge).  By properly grazing, the plants will all be stimulated to exude sugars into the soil to feed the soil biology and the plants that have been grazed are not bitten again until they have recovered.  This results in stimulated, healthy plants and well fed soil that has cover on it all the time.  You may never totally get rid of Broomsedge, but it will become a minor component as the species diversity increases.  The livestock only really want the top third or so of the plants for their nutrition, so the livestock benefit as well.  All the manure and urine are returned to the soil to be cycled again.

Once you can start properly grazing your pastures, they can recover and become populated with desirable plants.  If you want to apply some lime and or phosphorous to help speed that process along it's your money, but proper grazing can restore things if you are patient and diligent.
show more
2 months ago
soil
Indepth soil analysis
What you have described that you plan to do sounds fine.  Ecto-mychorrizae are very important to support woody plants if you add anything.  I don't think anything else is necessary.  With trees less is more when adding any fertilizer to the soil.
show more
2 months ago
soil

What does this soil test mean for a no-till vegetable garden?
Keep doing what you described you are doing and all will be well.  No lime or fertilizer is needed, just living plants as much of the time as possible.  The high P is from historic horse manure deposition.
show more
2 months ago
soil
Soil Health presentations
A few videos by the good folks at Menoken Farm of the tour I was part of this summer.
https://www.menokenfarm.com/videos-2/
show more
2 months ago
soil 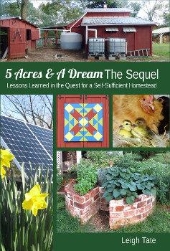 Welcome Leigh Tate, author of 5 Acres & A Dream The Sequel!
Welcome Leigh!  I will be interested to follow the discussion and see how your journey of restoring soil health to your land has progressed.  Cheers!
show more
4 months ago
homestead
What is "healthy" soil? Disturbance
Healthy soil is soil that is performing all of the functions it was designed to perform... just as a healthy person can perform all of the functions she/he was designed to perform.  Healthy soil infiltrates and stores water, cycles carbon and nitrogen and provides habitat for everything that is supposed to live in the soil so plants can capture solar energy to feed soil organisms and soil organisms in turn, can feed the plants.  Tillage is very disruptive to the structure and biology of the soil and renders it less capable of functioning.
show more
7 months ago
soil 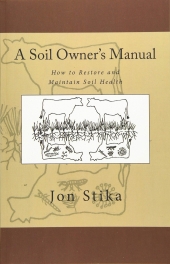 A Soil Owner's Manual by Jon Sitka--Discussion thread.
I am very humbled that all of you have taken what I have written about how the soil functions as a biological system to heart and are making your land use decisions accordingly.

Kate - You are spot on with the idea of feeding the life in the soil instead of trying to feed plants directly.  Modern agronomy has become lost, adding "crop nutrients"  to the soil as if it were a bucket that plants eat from.  Plants feed the soil and the soil feeds the plants, regardless of where the nutrients come from (air, fertilizer, compost, soil minerals, etc.).

Leigh - You are indeed headed in the right direction and that is what is critical to success.  Restoring soil health is not a race, you just need to head in the right direction.  The first few years are a leap of faith that you must take to get on the path to soil restoration.    If you focus on restoring soil health and let that drive your decision-making process you will continue to make progress.  The rate of positive change will increase the further you get into the process.

My book simply speaks the truth about how the soil functions.  I am not trying to sell farmers, ranchers or gardeners anything... no soil amendments, no equipment, nothing.  Understand how the soil functions and you can choose what tools will work for your situation; a tractor, a plant, a goat, cardboard, a fence, etc.

Tillage is a double-edged sword, as long as you understand the degree of disturbance you are doing with a tillage operation and mitigate for that disturbance, you can stay on a positive soil health trend.

I do not place my potato seed pieces into the soil, but on top of the soil and then cover them with a thick (foot or more) layer of hay, leaves, grass clippings, etc. and allow them to grow up through that mulch.  Add more residues as needed to keep them covered during the growing season.  You will learn what types of materials in what combinations work best in your climate.

You folks are brave pioneers on your way to better soil... keep the faith and keep thinking outside the box!
show more
9 months ago
soil