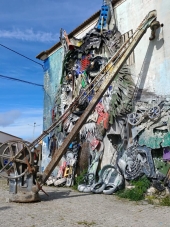 Street wall sculpture with a recycling twist
Back in 2008 we came across this car a Volkswagon in Vancouver and we had no idea about what the Driver was trying to say?
show more
8 months ago
art

Sorry but as mentioned in the first post, it won't work with cooked egg shells, it's got to be raw.

That's a great picture! Personally I would put a lot more shells in .  It's OK to add to it every time you eat eggs.  I ended up with about 30 to 50 shells.  Let us know what your neighbours think!

OLGA,
Will do - can easily add more egg shells - trouble is -it will take a little time as -  we only enjoy "scrambled eggs" now and again.. Maybe if I ask the neighbors nicely - they might save their un-cooked egg shells for me?
Regards
Don
show more
8 months ago
trees

Peach leaf curl -Old folks remedy
I have taken on board the egg shell idea - just happen to have a few egg shells from making scrambled egg - Awaiting comments from the neighbors..
show more
8 months ago
trees
Spread of Germs and virus

Chris Kott wrote:What we really need is brass-handled serving utensils, along with brass doorknobs, and anything else that many hundreds of people touch being made out of brass. Its natural antimicrobial properties make it a natural replacement for materials that tend to extend the life of bacteria and viruses deposited upon them, such as plastic.

I mean, we'd need in-seat heating, but brass toilet seats might be amazing, along with brass flush levers and door and faucet hardware. What about brass cellphone covers, and brass telephone handsets?


Gosh I didn't know about Brass having antibacterial properties. Just found numbers of reports about it.
show more
8 months ago
ulcer factory

Donald MacLeod wrote:
The spread of this coronavirus  thing - best plan is to regularly disinfect your mobile phone -
I have seen people who work for example: in a coffee shop taking a break outside, smoke in one hand holding their mobile and tapping away busy on their mobile phone with the other hand -
then put their phone in their pocket and the pocket is where it was placed earlier and they retrieved it from.
I saw them come back inside grab a cup for a customer and fill it with coffee. ( I refuse to go back to that coffee shop ) Think of the bacteria just passed on that cup?
I also imagine that as they cannot be without their mobiles looking to see who likes them? I can guess that they scroll their phones while on the loo as well..
How many times do they disinfect their mobile phones?

You might find valuable information on this sight.
It was sent us by a Chemist friend in Portugal.
It is keeping an up to the minute tally.
Scroll down – See the photos of the Wuhan Market also the diameter of a hair
compared to the holes in those masks ( which are useless ) and the size of the Corona Virus

show more
8 months ago
medicinal herbs
Spread of Germs and virus
This new Virus going around - and those that are now affected aboard the Cruise Ship.
Here is a bit I wrote about what my wife and I saw on the Ship we were on back in 2008 during our cruise from Vancouver to Alaska..
The below is from our Travel log and it is one reason these 70 plus year olds are not keen on cruising again.

So as to not identify the ship I have changed the Ships Restaurant name to self serve.

During a meal at the self serve Restaurant aboard our ship - I watched as a man sneeze into his hand, but then he grabbed the server utensil that was laying on top of food with the hand he had just several times sneezed into - dished up some food onto his plate, then put the server utensil back on top of the food with the handle laying across the food.

He then moved on to the next lot of food. I then noticed that all the serving utensils, spoons, tongs etc were laying on the plates of food. That man and possibly many others that followed and used those tongs now had his sneeze contaminating their hands – They in turn picked up the utensil and then just layed it back onto the food.

The other problem I saw was the fact that people used a spoon or tong utensil to put food onto their plate then proceeded to use the same utensil in other food items and left it laying across the last lot of food served which is a means of cross contamination - I asked to see the person in charge of the food service. He came from out the back - in his white jacket, and several gold stripes and introduced himself.

I said that the Captain keeps advising us that the Norovirus is spreading at an alarming rate on board the ship.  He tells us there are passengers sick and more each day.

I explained what I had seen, asked him to just watch what people were doing with the serving utensil once they put food on their plate. He watched with me as I pointed out different people, and he began to see the problem.
I said that they needed to supply another small plate to rest the serving utensils on - and because there wasn't one available, the passengers just placed the serving utensil back in the most convenient place - onto the food that it belonged.

He immediately sprang into action. Within about 3 minutes, 6 kitchen staff were laying down plates where the serving utensil could be placed. Others were gathering up the used utensils, and new clean ones were being laid onto the small plates.
Then I saw a staff person, standing by each servery area - directing passengers to put the server utensil back onto the small plate - and not on the food. It was amaizing to see such a transformation of the way food was being self served in such a quick time. The Head of the Food service thanked me as we were leaving.

Just imagine Johnny goes and Raymond uses them as well as another 20 or 200 other people handling them. We don't know who washed/sanitised their hands or who didn't, or if in fact the person before you sneezed into his hand - all placing the tongs back on the food.  It is no wonder then people on cruise ships get sick.
Another thing I noticed people with mobile phones; they take them out of their pockets begin tapping away or scrolling - using them for taking photos of the food then put their mobile back in their pocket where they retrieved it from. What the heck has been in that pocket previously you have to wonder? None of them I see disinfect their phones before putting them away - They definately do not use a disinfectant on their hands before handling the serving utensils after say photographing the foods available with their mobiles. The "mobile phone" is just ripe as a carrier for a future type Norovirus to arrive.

Update: February 2020
Currently a virus ( Corona virus ) is spreading ( reports say it began in a fish market in Wuhan China ) The news is telling us number of Cruise Ships are being quarantined because passengers are being found with the deadly virus aboard. People are also turning up with the virus around the world. It is spreading rapidly and with the virus spread so too, the death toll is rising.

I do remember as one entered the self-serve Restaurant there was a antibacterial hand sanitizer for use - BUT - How many passengers voluntary used it ? If indeed they did - out would come their mobile phones from their pocket and their contaminated hands were back again touching and using the food serving tongs.

The spread of this coronavirus  thing - best plan is to regularly disinfect your mobile phone -
I have seen people who work for example: in a coffee shop taking a break outside, smoke in one hand holding their mobile and tapping away busy on their mobile phone with the other hand -
then put their phone in their pocket and the pocket is where it was placed earlier and they retrieved it from.
I saw them come back inside grab a cup for a customer and fill it with coffee. ( I refuse to go back to that coffee shop ) Think of the bacteria just passed on that cup?
I also imagine that as they cannot be without their mobiles looking to see who likes them? I can guess that they scroll their phones while on the loo as well..
How many times do they disinfect their mobile phones?

Fires in Australia
I searched the index AS TO WHERE I'd let you all know about the effects some days the devistating fires in Australia are ALSO affecting us here in New Zealand some 2600 miles away. (4200 km )
We see on our evening TV news the horror our Australian brothers, sisters and the wildlife are facing each day and the tragic toll the fires are having on all aspects of life. The smoke drift I guess you call it is appearing
in our usual blue skies -orange. I took some photos. Even the Moon had an orange glow.
show more
9 months ago
ergonomics

I utilize as many Oak leaves as I possibly can.  The acidity they add is truly minimal.  Resistant Permies soil scientist and expert RedHawk did a nice thread about the “acidifying” effects of Oak leaves and even pine needles.  I will just cut to the chase.  Even a whole bunch of pine needles will just barely increase the acidity.

I utilize a LOT of Oak leaves and they add only goodness to the garden soil.

I hope this helps a bit.  If you need any more information I will try to help.

I thought about using leaves/wood chips as compost - and came up with this thought?
ANY FALLEN leaves or PRUNED branches FROM A TREE must be great to place as MULCH back under that SAME or SAME TYPE tree.
After all the leaves /branches were made by the tree - and surely they have all that whatever goodness in them that made them grow??
Just a thought
Regards
Don
show more
9 months ago
soil

Mark Silvert wrote:Thanks for posting this info. I just want to let you know that I just check out your site and I find it very interesting and informative. I can't wait to read lots of your posts

Mark - Thank you - Something over the past few days has come to mind: I did think back then - that a Solar Balloon could maybe used in those countries ( Which I believe are more or less in the Nth & Sth Poles regions ) where the sun shines 24 hours per day for a good number of weeks / months above the clouds and I envisged the Solar Balloon could go round and round as a less expensive type satelite or some such other flying scientific equipment.  Forgive me if I have my memory facts wrong - as it was way back some 47 years ago.
Regards
Don
show more
1 year ago
transportation