best, simple summary of all things wheaton labs
This is the manual laundry machine mentioned above:

I have the ingredients for making my own laundry soap, soap flakes, Borax, and Washing Soda, is that acceptable? I also have a wash system I purchased, but have yet used full time.
show more
1 year ago
wheaton laboratories

permaculture bootcamp - learn permaculture through a little hard work
A good topic for, "Newbie Permies," boots, ants, seemingly unlimited nomenclature. Is there a document to read to understand all this? Also, a written-out protocol. For instance, a "boot' picks out a plot after 4 weeks, is that rented? Owned? So many details. Immersed in the culture, I would learn the language; I'm just looking for the dictionary.
show more
1 year ago
wheaton laboratories

Elizabeth Fournier wrote:Tom -   Would you be surprised to learn that if a family would like the gold fillings or the teeth back prior to a cremation or burial, either the family or a forensic dentist needs to retrieve the teeth? Funeral homes and cremator operators do not do this procedure, nor have I ever met one who physically has done it. Same goes for the forensic dentist. I have been in the funera industry 29 years and never once have been able to find a dentist who is willing to come in and take care of this for a family. I've called around to several funeral homes in the area and they, too, do not have anyone on file to call. So teeth end up getting burned or buried. They are truly the property of the family but there is a shortage on removal options.

Let me contact the funeral home, and I'll come in with a pliers. (Thats a joke. I wouldn't want to do that to a loved one, but someone I sign permission could come do it to me for my family.) I would do it if asked by family or friends.
I dated a hairdresser in the '80s who rented an apartment from a mortician. She had her own business, and some months she was a bit tight. She lived in fear that she would be forced to do hair for a deceased person if she was short on rent. Congratulations on your book. My bone China concept is a bit tongue in cheek. I was afraid someone would take me literally, and castigate me over it. The best for you, in all aspects of life!
show more
1 year ago
zero waste

permaculture bootcamp - learn permaculture through a little hard work
Hi, I was talking to my brother who would like to come out with me. What is the website again to set it up?
show more
1 year ago
wheaton laboratories

*Welcome Elizabeth Fournier, author of The Green Burial Guidebook!
This comment reminded me of something. I am close to a dentist who gave me some insider info, she is banned from revealing to the public. We are told that amalgam fillings are safe, but there are very stringent rules regarding disposal of amalgam, (mercury), fillings that are removed. They are regarded as highly toxic, and have more stringent disposal rules than bio-waste. That is an important consideration for a company if that company is composting people for food fertilizing purposes. I don't understand the business model of these operations. I am speculating.
show more
1 year ago
zero waste

*Welcome Elizabeth Fournier, author of The Green Burial Guidebook!
Mountains push up from the mantle, wear away, there is a constant covering of the ground by silt, dust & dirt. Things get buried. I see that they found the grave of the ship Captain from Jamestown, just his bones, with teeth no doubt. Tours are given of the European catacombs, all the stacked bones from as far back as  the first millennium A. D. Bones can be ground, like Jack's giant put in his bread.
show more
1 year ago
zero waste

*Welcome Elizabeth Fournier, author of The Green Burial Guidebook!
Welcome Elizabeth, I have an image of how I want to be buried, a large-ish plot of large gravel, interred on the surface, a coffin-like cover, heavy, with slots cut in its surface to allow in the elements & small critters, and possibly staked down. When I am reduced to bones, disinterred, the metal parts removed and cleaned, could be interesting paperweights, and my bones sent to someone like Wedgwood, to make a set of bone China of my design. My relatives would no doubt resist the temptation of eating from them, but they may bring them out, set them up, and remember me. The gravel, once it releases the bodily fluids, solids, and oils, will be removed.
show more
1 year ago
zero waste

Coco Newlon wrote: Jennifer from the ATC showing some of our boots how to polish a coat hook. 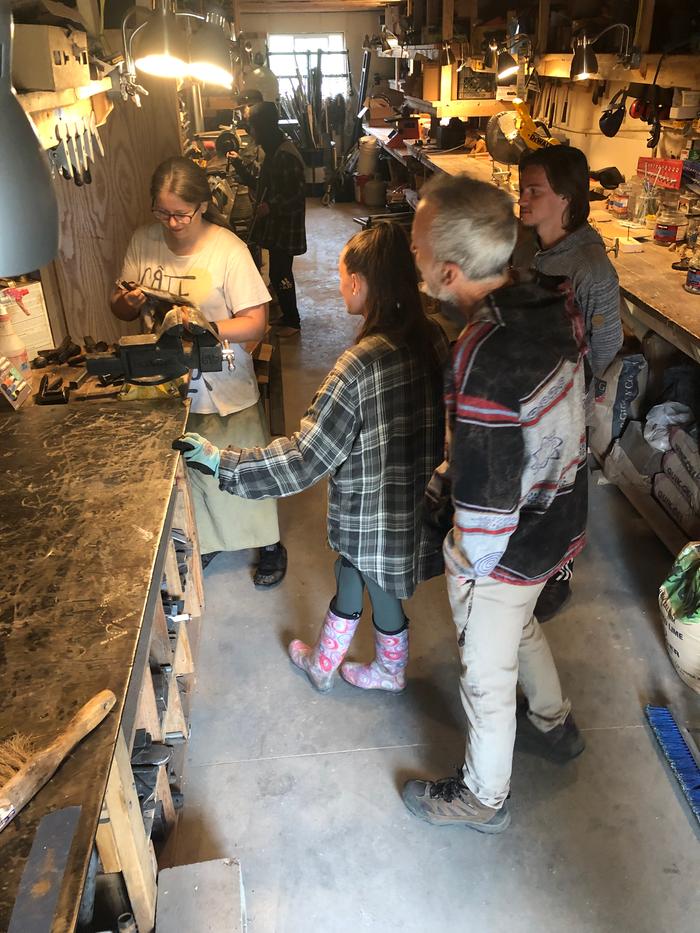 Fine and good Polishing that coat hook, but I'd prefer to Czech it. I was just looking for the coat Czech.
show more
1 year ago
wheaton laboratories

Image of Permaculture - public perception of the permaculture movement
Let me qualify myself as a non-farmer, a want-to-be-farming-&-raising-animals-soon guy. I spent my working life handling high voltage circuits. That said, I could identify with the farmer who deals with real issues, and the farmers who deal with them daily. However, when he said these farmers are involved in farming the way it has always been practiced, that is not accurate. Modern pesticides and synthetic fertilizer that provides 3 components are both products from WWII, fertilizer being a re-purposing of explosives. There has been big changes, changes in practice by farmers, but also changes in attitudes of consumers. In the '60s, most produce had signs of insect scarring. I wouldn't be surprised to find that farmers harvested fallen crops back then. There was premium produce, but sold at great premium, and not readily available at your local market. Part of the change is that the family farm has been nearly wiped out, only recently gaining a resurgence. The latter half of the 20th century saw massive losses of family farms, replaced by mechanized huge corporate operations. A parallel to my earlier mention re quality also broaches on the reality of lower quality overall. Where we used to buy vine ripened tomatoes, and in off season, unavailability, all commercially grown tomatoes today are picked green, and pumped with a gas when they want them to appear ripe just before market. Dr. Steven Gundry claims that there are substances called lectins that are present in green vegetables, and diminish when the fruit is ripe. Artificially pumping, (I can't recall the gas right now), gas into the atmosphere around green tomatoes to make them turn red does not magically ripen them. The harmful lectins are still present.
I, and others, are aware of principles that are true. Conventional corporate farmers are aware of principles that are true. There are prevalent misconceptions, mistakes, and mis-information, that could stand some education and understanding to create a better product. Who among us—lifelong grocery store tomato consumers, ha ve eaten a home grown vine ripened tomato? How many gardeners encountered their first artificially ripened hot house tomato? There is taste, and there is health. Modern agriculture puts 3 components into the soil, what?, potassium, magnesium and calcium? Every chemical fertilizer has the numbers on the package. There are 99 micronutrients important for good health, and trace minerals. Plants need 3 components; humans require a majority of the 99 nutrients for good health, and become ill with the absence of important nutrients. Inland folks used to tend to get goiter from iodine deficiency, so they added it to salt.
There is a, "guru," aspect, in Permaculture, and the world at large. Some people are fruitful, and help people, some charge $1,000 a head to speak to a crowd, and reveal basic principles, presented in a way to charm and dazzle. You know them by their fruits. Living healthy requires one to allow change in their lives, farmers, scientists and lay science practitioners shaping good practice, consumers. Me?, I don't WANT to eat GMOs, I don't WANT to eat fake meat grown in petri dishes, I don't WANT to eat genetically manipulated animals, I don't WANT to eat food grown that I don't WANT to drink filtered urine and feces. For me, Permaculture is a hope, that I can grow healthy food for myself & family. It requires great effort from me. Consumers want healthy food, and will pay a premium for it. Go to a farmers market, everyone selling what they represent as organic, and look at the boxes it comes in, many from producers of non-organic. I applaud commercial farmers who would come on a forum like this, have a discourse with us. My hope is that they find a path of production of healthy foods, (which sell at a premium). That's all I got right now.
show more
1 year ago
permaculture