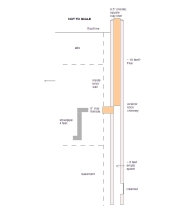 Rocket Mass Driveway
The system y'all are referring to is called a "snow melt" system and it's traditionally hydronic or steam driven so it's usually work covered by the "wet" side of the HVACR community, that is, steam/pipe fitters and or plumbers. After visiting Wheaton Labs this past October for the RMH Jamboree it came to me that a dry snowmelt system would be an awesome thing to test. I live in a small town that calls itself a city so the city government can have more control over how the community looks; they would insist upon permits and fees for a permanent roof of any kind over the driveway. They would not, however, even notice if I dug up my driveway, installed piping and covered it back up. While grade would have to be a consideration for melt run off, I think a driveway with a pronounced grade would be a better fit for a RMH snow melt system than a flat or slightly graded driveway. Tossing off the idea, I'd build the firebox at the bottom of the drive, break off a 10" round feed to a true manifold that fed a number of square duct runs up the drive, opened up into a bell and exhausted from there. I'd make sure the ducting had the same or slightly higher combined cross sectional area as the system itself.
show more
2 years ago
rocket mass heaters 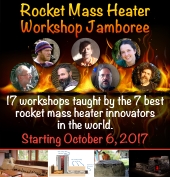 2017 Rocket Mass Heater Workshop Jamboree
Yay, emails! So I will be driving from the Denver area; seeing as this is over a 900 mile drive I'm planning to leave Wednesday, hopefully drive 2/3 of the drive, stay somewhere along the route, finish the last leg Thursday and get camp set up. I'm concerned that tent space will be taken up at this point.

It's good to see there will be showers there; how about some way to wash clothes? 12 days camping is more than I've done in one stretch and I've done the Rainbow Gathering a few times back in the day.

That's my concerns for the moment. This is 5 weekends away? Am I counting this properly? Damn I have much to attend to.

2017 Rocket Mass Heater Workshop Jamboree
Okay, so since you said they should have contacted me I checked my primary spam filter and I think I found the contact. Thank you!
show more
3 years ago
wheaton laboratories

2017 Rocket Mass Heater Workshop Jamboree
I'm paid up and registered for the whole deal, did I miss an email with all the info I need? I'm a bit intimidated with getting ready to camp in the woods in Montana for two weeks in October.
show more
3 years ago
wheaton laboratories

2017 Rocket Mass Heater Workshop Jamboree
I like how well thought out your work is, Paul.  I'll leave her home. I'm very close to pulling the trigger.
show more
3 years ago
wheaton laboratories

sauna rocket stove progress
So did my post help? Didja bend that metal?