How to account for future growth of your food forest
What I noticed was that after 30 years, my selected seedlings are now all over my farm with their progeny. Without mowing there is no reason to plant much anymore if at all.  Since there is an over-story, it allowed birds and small mammals to create my new generation food forest. I limb up those trees and try to direct them to light and remove the plants I do not want  in size by using lopers.  I do not own a tractor but I have weed whacked the thick areas and protected the new vigorous apples, pears, shellbark hickories and plums. Many of these animal planted seedlings are very vigorous. Eventually though it may get too dark for them and I am started a mix of black currant seedlings to see how these do in these heavily shaded areas. I  think it is the savanna institute that says they can tolerate a ton of shade and still produce. There is also a means to develop future cultivars of black currant this way too. 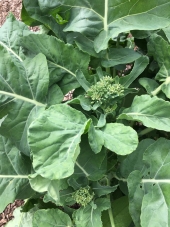 Can you graft brassicas?
You can root them. I have been experimenting with various brassicas and you can always find a few that make it through the winter even in a common seed source. I think it might be luck much of the time. The people who use food plots have produced a few hardy brassicas and some are available. But normally they are selected to remain green and vigorous into December. Some kales do not do that and the stems turn a light brown and the whole thing turns to mush.
About a decade or more ago, I started growing nine star perennial broccoli. It was nice and it worked in the polyhouses but not outside. I finally gave up. It consistently failed outside. But in the process of survival of the fittest, I did find some other open pollinated brassicas able to reliably make it below the 0 F mark. Ironically they also have the hardest stems too and are kind of woody in nature. (The stems, not the foliage.) What I wanted to say is you can root them pretty easy. Leave at least 3 eyes. After cutting, let them dry a bit and then stick them in a sandy peat moss. We have tried rotting compounds but I am not sure if that is any better than nothing.  For us rooting was very high about 75 percent success in the spring. Some people recommend cuttings that are around 6 inches long.   Basically the root of the brassica does not really sprout from below the ground so you need a hard woody stem with a rather good tolerance to cold. I think snow might be a good insulator and that may give you the luck you need to succeed with the so called hardy brassica.
show more
10 months ago
plants