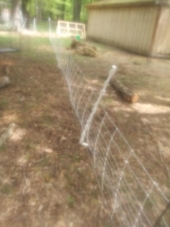 Training pigs to electic
Sometimes it works better to run both a hot and ground line. If the ground is too dry they may not be grounded every time they touch the hot wire. If the hot wire is next to field fencing, also ground the field fence.
show more
5 months ago
pigs
Microbial Water Filtration
UV light of the proper size for flow will kill bacteria. It's legal in sanitizing water used in dairies. I use to dairy and raise horses and cattle.
Reverse Osmosis uses pressure to push water molecules thru a membrane. Things bigger than a water molecule won't go thru and are flushed away. But it's not like filtering water. Only about 1/4 to 1/3 of the water goes thru, the rest is used to flush and carry away the rejected contaminates. You also use filters before the membrane. Lots of info on line. I'm retired and live on a big boat. I use RO to make fresh water from salt or unknown fresh into safe fresh.  Membranes are rated at 77°F. Colder water, less output. Many RO systems on eBay. I built my own, 40 gph from salt water, much more from fresh.
If you live in a rural area that didn't have mining, no feedlots, etc., spring water and small creek water may be drinkable with filtering and sanitizing with a UV light or some added sanitizer, but get it tested. Rural meaning not many people nearby, no cities over the hill, no interstate hwy putting pollutants in the air, water is either coming out of the ground where it's collected or a flowing stream you can trace to it's source. I used spring water on the dairy.
show more
1 year ago
cob

Pellet stove add on
I have a hydronic system with a oil fired boiler. I bought a pellet stove and I added 6 passes of 3/4" pipe in the firebox and tied it into the boiler with a circulation pump. With some changes to the pellet stove controls, when the boiler calls for the oil burner, instead  the pellet stove goes to a higher setting and the circulation pump runs faster. I have a pressure relief valve on the stove and boiler. Pellet stove runs 24/7 in cold weather and goes between minimum setting (40lbs in 30 hours) to a higher setting depending on the weather. I use 2 percentage timers to control the auger feed and kept all the safety features. The oil burner only comes on in extremely cold weather or when the pellet stove is offline.
show more
1 year ago
rocket mass heaters
Electric fence help please
I had cows and horses...
For bears, I found alternating wires of hot and ground about 6" apart, closer together near the ground. And no field fencing. I use heavy aluminum wire. It lasts longer and carries a better current. The wire needs to be as tight as possible. The galvanized steel wire most hobby farms use will start to rust in a couple years and soon fail to carry current. In the dry season, the ground doesn't always make a great ground and I've seen animals walk thru the wire without a shock on fences that use the dirt as a ground. Also you have to keep grass, trees and other debris off the hot wire or lose the ability to shock.
Use multiple ground rods as other described.
show more
1 year ago
fencing
Breeding Dexters for Dairy - what can be done with extra milk?
Former commercial dairyman...
I guess about 3 gallons/day fresh tapering to about 1 with pasture only minus what the calf takes. If allowed to nurse, the calf can easily do a gallon a day at a month old. You can increase the milk with grain and alfalfa. But once the production goes down, it's very difficult to bring it back before the next calving. Cows need to be bred and calf once a year to stay in milk. They are dry (not milked) for 2 months before the next calf. A cow can live on a 1/2 acre of excellent pasture. That's growing pasture and not stepped on, laid on, churned to mud or covered with cow pies.
Cows that nursed a long time continue to want milk and will often nurse as an adult whenever a cow with milk is present. They get down on their knees to nurse from any willing cow. It's better to wean the calf early and get it on solid feed asap. Calves on milk only are more prone to sickness. And vaccinate.
Pigs are the usual use for excess milk. Pigs eat anything, even meat.
As a dairyman, my calves were weaned by 30 days and much more healthy for it.
show more
1 year ago
cattle
single-cow economics
Cows need to be bred and calf yearly to stay in milk. Milking stops 60 days before calving to rebuild the cows resources. Cows are a herd animal and do better with company, even another specie. Milking has to be done daily, usually 12 hours apart. Missed milkings, poor food, injury reduces milk. Hand milking is tough on the hands and leads to swollen, arthritic hands. Think about a home milking machine, it's at least twice as fast.
Former commercial dairyman
show more
1 year ago
cattle

Miniature cattle/Highland cattle for milk and meat?
I had a dairy, raised beef cows and horses in Tillamook, Oregon.
Any cow can produce milk and be trained to milk. The reason there are beef cows and dairy cows is some breeds produce more milk. Others produce a higher butterfat percentage. Some make meat faster. Also dairy cows produce bigger calves and about 10% of the births need help. Beef cows have smaller calves and are bred to have calves on their own. A cow has to be bred once a year and have a calf to continue producing milk. They need to be dried off (stop milking) 60 days before the calf comes to rebuild their body resources. The milk volume is greatest about 30 days after calving and gradually decreases. Grain and good hay increases output, but once output drops (from poor feed, missed milkings, injury) it's difficult to bring it back until the next calf.
The easiest method is buy a cow that is already trained to milk. Raising a calf to milk is better than a grown cow. Think of a grown cow as almost wild. First you have to tame it, then train for milking. When training  a cow, kindness and persistence gets them trained. They should be brought into the milking area several times before calving to become comfortable there. Dairy associations should have lots of information. You need to think about how you're going to milk. By hand or machine. Hand milking requires strong hands and fingers. Arthritis is common in old hand milkers. An old milker I knew had to soak his hands in ice water before doing anything. Hand milking takes much longer than machine milking. Some cows may be more trouble with extended milking time. Many udder problems come from poor milking practices. Read up on it. An infection in the udder is difficult to cure.
I don't know about smaller breeds, but a Holstein produces about 100 pounds of poop a day, not counting urine. In a commercial heard they consume 30+ pounds of grain, 50+ pounds of alfalfa, and all the pasture they can eat depending on milk production. What they eat affects the taste of the milk. Exotic foods usually are not worth it.
If there are livestock sales near you, dairy cows, no longer producing enough milk for commercial dairies, can be bought for less than the cost of beef. Usually they will have one or more quarters that can no longer be milked because of injury or infection.
show more
1 year ago
cattle 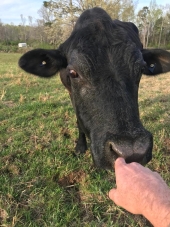 Why cattle over other animals?
Look at the poop. A cow with its 4 stomachs utilizes grass and other feed better than any other animal I know. And beef tastes better than any other meat I know. If the gods didn't want you to eat beef, they would have made it taste like vegetables.
Cows are durable. Much more than sheep. Beef cows calf on their own. Sheep often need help or die in the process. I've never raised sheep, but I've seen more dead sheep in fields than cows. I had a neighbor with sheep and during lambing I often had to help (when the vet was busy elsewhere) lamb his sheep because he was too prissy to reach inside and sort out the legs to keep birthing on track. And I hate mutton.
show more
1 year ago
cattle
Overgrown pasture
I had commercial beef, dairy and horses in the PNW. A single beef cow can live on a half acre of good pasture. A horse needs at least 3. And they need to rotate or most of it gets trampled. I used strip grazing. After about 3 days the cows were moved and the old section mowed, manure spread, and rested for about a month. A dairy cow needs to calf once a year to stay in milk. It also needs a dry period of 60 days before calving to rebuild it's body for the coming lactation and to grow the calf. As others said, it needs companionship. Cows are a herd animal. There's a lot to know about having a dairy animal. During the dry period, the cow needs to be on a low calcium diet. This forces the cow to make calcium. Otherwise, when the cow calves, the sudden blood loss of calcium when she makes her first milk can cause milk fever. The cow seemly passes out and can't get up or stand until IV'ed with a calcium supplement. That means a vet bill. They also need some supplements, usually in a proper grain ration. When milked, all the milk needs to come out. They're not a refrigerator. Leaving milk in the udder can cause infections that can kill the cow. It may be difficult to properly hand milk completely for someone new. A one cow milking machine would be advised. There are probably people that will artificially breed your cow or others that rent bulls.
The best way to manage your pasture is mow when the animals can't utilize all the feed. Mowing cuts the seed heads off weeds before they develop and reseed. I would use a temporary hot wire fence to break your pastures into 1/2 acre sections of one 4 acre pasture and rotate. Use the other 4 acre for hay. Hay needs to be below 22% moisture. There should be custom bailers in your area. Most dry grass hay too dry and loose most of the nutrients.
In my dairy, an average cow got 50+ pounds of grain, 50+ pounds of premium alfalfa, and all the good pasture she could eat. But that would produce way more milk than you could use. On grass, a good dairy cow could still probably produce 30 pounds of milk a day. It that's too much, maybe a half dairy or a beef cow would be better. Any cow can provide milk.
show more
1 year ago
cattle