Humane slaughter
The top of a goats head is a battering ram, so especially thick.  As mentioned, small target so the shot would need to be placed well.

One of the things not often considered when looking for "the most humane way", is the comfort of the person doing the slaughter.

Ex.  I have seen people slaughter chickens in a cone with a few swift slices to the neck, and been told this is the most humane way to do it.  I have also seen folks behead them with a hatchet, and been told that is not so humane.  However, I have seen people who are not comfortable doing with it the cone and slice method who end up not making good cuts, prolonging the process, and putting the chicken through a decidedly less than humane slaughter (not to mention really rattling the person doing the work).  If they were more comfortable swinging the hatchet, it would have gone much better for both the person and the chicken.

I would think about your goats similarly.  I don't know what your experience is with slaughter in general.  If limited, start by doing it the way you can get it done.  Over time you will learn what works best for you and the animals.
show more
1 month ago
goats, sheep and llamas

Show me your composting setups! (pretty please)
I am currently just using open piles.  However I agree, I made the best compost with my pallet system.  I would add to a chamber until it was full.  Then I would flip it over a spot and begin filling the first chamber with new material.  By the time compost came out of the other end it had turned 5 times.  At that point it was added to a large pile to age until needed.  One thing I would say though, the pallet system provided some spots for snakes and critters to nest - they like the heat.  Haven't had that problem with the open piles.
show more
1 month ago
composting
wild scrapy chickens/ducks
Yes, they will find their own place to roost.  I had some that found my house and began roosting on top of my chicken run, which is an A-Frame about 12 feet tall.  They can fly better than a domesticated chicken, so are tough to contain.
show more
1 month ago
chickens
wild scrapy chickens/ducks
If you are really looking to go "hands-off", there's Guinea Fowl.

In my limited experience;

Survivalist Vs. Permaculture/Resiliency approaches
As Douglas has alluded to, this may be more of a function of age and position in the life-cycle than anything else.

As a younger person, I leaned more towards what you describe as the "survival" perspective.  There are things going on in the world, and I need to do something RIGHT NOW. At 20 years old, 10 years seems like forever - it's half your life.  At 40 it goes by too fast, and at 60 it is the blink of any eye.  As I have aged the idea of planting a tree that I can harvest from in 10 years, or better yet my grand kids can harvest from in 40 years, seems much more useful than it did when I was 20.

If she is hard set in that survivalist mode, and introduction to Jack and The Survival Podcast might help as a sort of transition.  There is a lot of practical survival discussed, not fear mongering.  Really helped me along a journey that started at Alex Jones and is currently at Permies!
show more
1 month ago
homestead 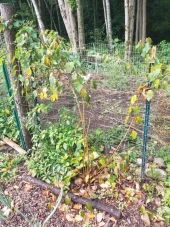 Water? Nutrients?
Yeah, we're creeping up on frost pretty quick.  Mid-September is the estimate for my area, although I don't think it will be that soon this year.  I will be interested to see if the other one starts to go through something similar, since it has followed a few weeks behind all along.  On a side note - the amount of growth they DID put on this year has me thinking they may overwhelm that garden in the future.  I need to do some more research on how to handle them over the long term.
show more
1 month ago
kiwis

Water? Nutrients?
It could be sunnier by about 3 minutes a day :)  They get direct morning sun, and by the afternoon they are both in the shade.  Of the two, this was the one that took off first.  If you had asked me in June which of the two was more likely to make it, I would have said this one.  This is the first full year for them in the ground (planted last season), and it put on a ton of new growth but is petering out now towards the end of the year.
show more
1 month ago
kiwis

Water? Nutrients?
Anybody have thoughts on what might be wrong with this kiwi?  The leaves started yellowing from the base of the plant, then falling off.  I still have nice green growth at the tips, but the rest of the vines are bare at this point.  There is another kiwi about 15 feet away that doesn't seem to be having any issues at all.  I will say that I try to water as little as possible, and this has been a pretty dry year, but this kiwi has received to less water than the rest of the garden and seems to be the only plant in this situation.
show more
1 month ago
kiwis