Merit Badge info
Raised in the Pacific Northwest, i got a job in the tech world and earned a grub stake. Then my husband and i moved to Hawaii, where i am mostly sure i won't get us frozen to death. Here we are homesteading our way up, but we have not yet found our farm. Meanwhile we are building income streams and learning about permaculture and running a business on this half acre, while homeschooling our daughter.
Hawaii
Apples and Likes
Apples
Total received
26
In last 30 days
1
Total given
0
Likes
Total received
103
Received in last 30 days
1
Total given
72
Given in last 30 days
0
Forums and Threads
Scavenger Hunt

PEP BB rocket.sand.hotwater - Start Rocket Hot Water and Get to 140

While at the 2019 PDC / ATC I was able to make hot water in the non-pressurised water tank. The hot water was for doing the dishes. It was quick and easy!


And I took maybe 30 pictures, and I have a lot of trouble uploading pictures from my Android and I missed some. I kept selecting the ring one our of hundreds of tiny thumbnails and then having to back and accidentally deleting the one I got, sigh.

Here are the photos I should have had before- the supplies for the hot water making. I'm sorry I didn't notice! At least I still have all the pictures! Better late than never?
show more
4 months ago
pep

During the ATC, i did a load of clothes in the cool hand-clothes-washer they had. It reminded me of a toy one I had as a kid, which my mom also has as a kid. It was a lot of work. But much better than a bucket. 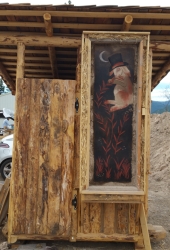 PEP BB greywillow.sand.upgrade - Upgrade a Willow Feeder
During the ATC repair cafe, I was able to replace the fan on the inside of the underside of the Willow feeder at basecamp. I didn't know anything about it, so I was given instructions from everybody. It went from not working to working, yay! I was also able to implement a flag system, although I'm not sure how long it lasted. I'm not sure if either of these count. Perhaps the second one could fall under the art category? If it doesn't count, that's fine. :) It was still worth it.

While at the 2019 PDC / ATC I was able to make hot water in the non-pressurised water tank. The hot water was for doing the dishes. It was quick and easy! 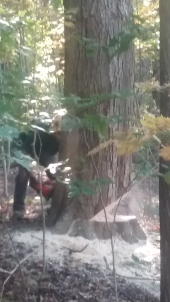 PEP BB woodland.sand.livechain - felling a live tree with a chainsaw
Oops, here is the wedge cut. I can't seem to remember the list of photos long enough to actually post them.

Also, here is a video. First YouTube Video I ever have uploaded! Please forgive the video quality. https://youtu.be/n8k4ONBcgVE
show more
7 months ago
pep

During the ATC, I cut down a live tree with a chainsaw. Before this I had never cut down a large tree, only smaller ones < 4" diameter. We used a cool tool which leaned at a 45 degree angle or so, digging teeth into the tree and foot into the ground which really felt like it improved the safety of the situation. It seems to be called a tree jack. Once you have your notch cut, you cut the other direction but not all the way, then you push it over with the winch on the tree jack. It looks like this: (no affiliation) https://www.amazon.com/LOGOSOL-FELLING-LIFTING-ARBORIST-FORESTRY/dp/B06VSW3YMS

PEP BB gardening.sand.hugelkultur - Build a Hugelkultur
(The mulch picture is also the second view of the finished pile, though I didn't get a person in that one.)

I have more pics of the plantings, if you need them! Here's the comfrey cuttings with more sunchokes, although the comfrey looks like sticks :/
show more
7 months ago
pep

I forgot to say that the mulches were: sawdust buckets, branches clipped from connifers, chop and drop of many kinds of plants, and large pieces of bark.
show more
7 months ago
pep

While at the 2019 ATC, I made this hugelkulture near Allerton Abby, facing south in a location chosen by Fred. I've been struggling with my computer, as it is 11 years old now and it's being grumpy until I throw it a birthday party. And by "birthday party" I mean go in and clean it up and make some room. So I decided to go ahead and post this through my phone. Please forgive the picture selection, as all of the pictures are shown super tiny on my phone, and i might pick the wrong ones and then have to post a second time.

I used wood that was taken from piles on the road, and some logs and stumps that were already near the spot. There were also a lot of smaller trees and large branches put in. I don't know what kind of trees they once we're, as they were not recently cut. The excavator was at the lab already, which was lovely, and my instructor was there to keep an eye on me if I was getting myself into trouble. (If you use it too fast it makes big shakey movements!) And to save me if I rolled it down the hill. (Side note: the excavator was really fun!)

What I Did Wrong:
1) So, i made it 7 feet, especially on the deepest side, but this hugel wants to be bigger. Much bigger. Twice as big. And i wanted to make it bigger but didn't for... reasons. But not only could it have supported more dirt, I feel that the top layer of dirt is too thin and may wash or erode away and expose the wood, which is not ideal.

2) Not enough planting. In my head, 7 feet is pretty tall. But in order to be that tall, it's also more than 7 feet thick. And this one ended up being maybe 10 feet long? Longer? (I didn't measure that direction.) The overall surface area is much, much larger than I anticipated. So although i planted alot of seeds, it should have had waaay more and I only did a small amount more than was required for the badge. This is partially because I selfishly was thinking about how many badges I might have time to get while at the ATC, and partially because I hadn't planned ahead, so when I discovered I might have the opportunity to make a hugelkulture, it was during the ATC and I had not brought seeds with me. The seeds and plants I did plant were kind gifts graciously bestowed upon me.

3) Not enough mulching. Mulch should be several inches thick. I made a pile of mulch larger than myself, and put it on the hugel, and it barely made a shadow on the pile. Far and above this is the prep I was least prepared for. I didn't have any more hours to spend at the time- but for a future hugel my current belief is that most of the time I spend making the hugel will be to collect the required amount of mulch to be effective. As it was, the mulch I was able to put down was a sparse, sorry sight.

4) Watering it... For the first 2 years? So... I put water on it. But it was remarkably difficult. First of all water is heavy. The hugel needed a ton of water, as it was pretty dry. I ended up mostly watering the spots I planted, but just once after I planted. What I think it really needed is a good long soak to get the innards wet, and then to be watered again periodically for the first two years. There's nothing set up for this hugel to do that. This is going to slow it down. Also when I poured water on it, it wanted to run the dirt off, so I had to be careful. If I made one of these at my parents house, I would want to install a soaker hose system under the mulch along it, so that I could make sure it gets on its way to rotting those logs. Then after the first year or two I would pull them out.

That's the list of the stuff that I know I did wrong. But it's still a big hugelkulture, and it exists. i hope it ends up being better than nothing. :)

I'm grateful for the chance to have made one, as I learned a lot. I wouldn't do it without the excavator. I definitely don't have that kind of time, or beefy arm muscles. Also, it's way, waay more prep work than I anticipated. Now I can make a better one next time.

Edit: the pictures did not attach to this one, so I'm trying again with an edit.

PEP BB earthworks.sand.trail - 200ft of Trail Maintenance
A question on this BB: my parents have a trail through the woods behind their house which needs clearing; it has sticks and branches way out in the way, some requiring chainsaw. If the branches don't get trimmed back then the path closes up. The path itself hasn't been swept away and little would need to be done to the mossy floor of the path. Would clearing this path count for the bb, or is it important that the floor of the trail be improved?

Thanks!
show more
8 months ago
pep