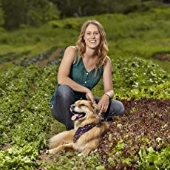 *Welcome Acadia Tucker, Author of Growing Good Food!
Hello Arcadia.  I am centrally located on the east coast of Vancouver Island, in British Columbia, Canada.  I first learned a little about soil amendments as a very young child.  My brothers and I were a bit disgusted at how my Mom collected coffee grounds and kitchen waste, which she dug in around her roses.  Jumping ahead 30 years, I started my own garden on heavy, clay soil.  Years of compost, cow manure, seaweed, and working the soil has gradually produced a clay loam that grows a variety of veggies, especially particularly yummy root crops.  I learned some basic principles from a Belgian farmer, who used chemicals in his seed rows, and toxic sprays, which went against my convictions, so I concentrated on trying to provide better conditions for my plants to grow, so they would be less susceptible to pests.   Now, 40 years later, I am still trying to add sufficient organic matter to help retain moisture, as climate change has affected my summers significantly.  We can go 3 to 4 months without rain in the summer, which is difficult to mitigate with a shallow well.  I eventually hope to install a rain collection system, to augment the cistern I installed..  Rather than remove deadheads, seed stalks, and plant roots, I use them in my walkways, difficult as they are to compost, along with sometimes straw, and maple leaves I collect in the fall. Eventually, they breakdown and provide lots of organic matter.

I would love to better understand carbon gardening.  I do burn blowdowns, branches, and trimmings in my firepit, and then spread the ashes, but I have no idea how to produce char without oxygen.  In today's world, it feels more young people are taking an interest in gardening practices, which I have basically taken for granted for decades, along with canning and preserving the bounty.  This is something that is badly needed in a time when an addiction to convenience, and seasonal fruits and vegetables are in demand year round.  Talk about carbon footprint!  Thanks for adding your voice!
show more
8 months ago
carbon farming
Elderberries vs Black Currants
Hello to John, and all contributors.  I live on east central Vancouver Island, and grow raspberries, blueberries, strawberries, and black currants. In the forests around me, I can pick salmonberry, thimbleberry, Oregan grape, huckleberry and more.  It is my understanding that most berries provide significant amounts of antioxidants, vitamins and minerals with fewer carbs than many fruits.  Since elderberries are native to the east, I was wondering how black currants, in your opinion, stand up to elderberries.  Numerous resources suggest that black currants exceed elderberries in many minerals, Vit. C, and are slightly less glycemic.  I am enjoying black currants more and more, usually eating them freshly picked or frozen.  I would appreciate your comments, and information on the suitability for growing in my region.  Thank you. 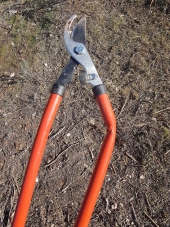 Dale Hodgins wrote:Thousands of cuts and a few sharpenings. I had some loppers made in St Catharines Ontario, which is a fruit growing area, that were about 30 years old. I finally sharpened them down to the very end , but they would not break.

To Dale and anyone else:  What is the best way to sharpen loppers?
show more
1 year ago
meaningless drivel

FREE Natural Raised Beds
I did this three years ago, after tearing apart a large hugelkultur bed that had become home to rats.  The pictures attached do not really show the height of the soil compared to the walkways, but it has turned out really well.  I fill the paths with leaves, sawdust, hay, deadheads, and have access to block plantings.  I have beds for alkaline-loving veggies, and all the berries are established in their own beds where more acidic soil exists.  I used to rototill most of the 35x50 garden, but now turn the beds, which do not get compressed by footprints, with a shovel.  I like that, except for the raspberries, blueberries, and currants, I can rotate crops, companion plant to deter pests, and run drip lines as I design the space in spring.
show more
1 year ago
gardening for beginners 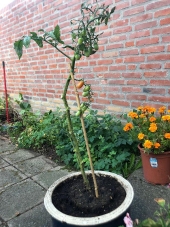 Does topping a tomato plant really help the fruit ripen faster?
I tent my tomatoes with 4 mil poly, which I use year after year, and which seems to help tomatoes ripen as well as holding off blight, which I think is more likely with our cool, damp nights as we approach autumn up here on East/central Vancouver Island.  Been working for me for years.
show more
1 year ago
plants

vollkornbrot
I'm going to try the kefir suggestion.  I noticed from one of the threads that they preferred the kefir with yeast.  Whether it contains yeast or not, it would seem the difference would be in the time it takes to rise the very little bit a true folkornbrot does.  I don't have a bread cutting machine, and it's next to impossible to get the uniformity without it.  I do not add anise to the rye bread, but the more leavened spelt bread.
show more
3 years ago
bread

vollkornbrot
I have been baking whole grain bread for years, and when living in Denmark in the 70s, I fell in love with Struer brød,  which was basically whole-grain rye kernels held together with sourdough and whole-grain rye flour and a bit of salt.  The sourdough was usually produced with potato water and flour, I poured boiling water over the rye kernels as previously described, and assembling the bread was generally quite a sticky heavy mess. One thing that they did in Danish recipes was suggest weighting down the top of the bread and placing a pan of hot water at the bottom of the oven. I would wrap the bread in a tea towel after removing it from the pan if I wanted a softer crust.   Since that time I have modified my standard recipe because I have only myself to bake for, so I have combined different breads. I generally use rye or spelt whole kernels, soaked as described, sourdough or yeast, whole-grain flours whether rye or spelt or both, and sometimes sunflower seeds, flax seeds and sometimes anise for a lovely aroma when toasted.  Fulkornbrot there's always heavier, more nutrient-dense,  and can be a meal in itself with some cheese, boiled egg, or pickled herring. It is the foundation of Danish smørbrød.  I have enjoyed experimenting over the years, and always appreciated heavier bread after a childhood eating German or Lithuanian breads.  Have fun with it.
show more
3 years ago
bread
Permanent deer fence building assistance
Contrary to one responder, I have watched deer jump easily over 4' fencing from a standing position.  Perhaps the deer here on Vancouver Island have more spring in their step, but I had a fence built around my garden last year that is indestructible.  Cedar posts were fixed in holes in concrete, tied together at 4 ' and 8' with fir 2x4s, and covered with two runs of 4' stucco wire, which is cheap.  It is sturdy and my garden looks like a compound now, but it does the trick.  Caps on the posts and a nice door and it's quite decorative.  It will last longer than me.
show more
3 years ago
fencing
Hugelkultur and rats?
I live on Vancouver Island.  Yesterday I tore apart my 4 year old hugelkultur bed, about 30 feet in length.  It had become the perfect home for rats, who were eating my tomatoes off the vine.  I detest rats, and found at least 8 adults and a nest of new borns in my unearthing process.  I liked the concept for a dry part of my garden, but not when it creates the perfect home for these pests.  I will return to standard gardening practices which have worked for 35 years, and install drip irrigation come spring.  I'm glad to hear others have had this problem.
show more
4 years ago
hugelkultur