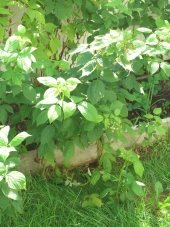 Yellowjackets living under raspberry bushes HELP PLEASE
I first discovered these traps when we moved to a new housing complex which was surrounded by mostly open land.  A nearby electronics factory had these hung all around their property.  At first I couldn't understand why they didn't empty them, as each one was at least half full of dead hornets.  Then I remembered my mom's overnight trips to the country, and how the hornets were attracted by her car's radiator which was covered in dead bugs.  Then I put two plus two together, and realized the dead hornets would be their own bait.  HOW CONVENIENT!  No need to ever again mess with the trap.  It just doesn't get much better than that!
show more
4 years ago
homestead

Yellowjackets living under raspberry bushes HELP PLEASE
This is a very old thread, but I wanted to add my thoughts.

I HATE YELLOW-JACKETS WITH A PASSION. A whole nest full attacked me when I was a child, and it's been a feud ever since.

Here's what I've learned about the little suckers.
1. They love sugared water (soda pop) and meat. Some people even call them "meat bees".
2. You have to get them before they breed, so buy yourself a couple of hanging yellow-jacket traps, and put them out right after winter. As the little suckers wander in and die, leave them there! Some people say you should empty the trap, but that advice is dead wrong. Yellow-jackets are attracted by dead things, including dead yellow-jackets. Just let them pile up year after year. You'll notice less and less of them as the years go by, because for every one you catch early, another 50-100 never get born.

This is the only trap I've ever seen that works, and it works great!  Rescue - Reusable Yellow Jacket Trap Find them online or at your local big-box store.  Remember you will be buying the traps only this once, and you do not need to buy extra bait. Just hang them high and away from people and pets, then forget about it, and enjoy years of yellow-jacket free living.
show more
4 years ago
homestead

Organic bed bug control
A few months back, I went on vacation with my daughter, son-in-law, and grandkids.  Apparently we picked up bedbugs. After returning home, I noticed a few bites here and there on my body. Suspecting maybe fleas or other 6+ legged critters, (as I live with the four legged kind) I spread a little diatomaceous earth around the bed and bedroom carpet. It was time to do that anyway to minimize the dust mites I'm allergic to. After a while I noticed there was nothing to notice, so I didn't give it another thought. UNTIL...

A couple of months later my daughter said she had bedbugs. An exterminator cost them $600, and was guaranteed for a mere 30 days. What a crock! I now believe I had them too, but killed them off with the diatomaceous earth before they had the chance to breed and spread.

Lately I've been seeing cockroaches around the house. (Here in Texass, the locals call them "water beetles", but I know a cockroach when I see one!) Brazen little suckers--one ran right in when I opened the sliding door to the back porch. That was the last straw! It's been raining almost constantly here, so I was waiting for it to stop before putting out the diatomaceous earth. A quick sprinkle around the house, and no more invading cockroaches! They like to invade the garage as well, so I sprinkle a little around the walls. I'm sure there are plenty of dead cockroaches hiding where I can't see them.

50lb bags are the most cost effective, and it lasts forever. To spread it around, I use a big sieve as a scooper, then sprinkle liberally. All around the house's foundation, and wherever else they hide, like wooden fences, near rocks, etc. Inside the house, I spread it under couches, behind appliances, and under the sink. I love that it's non-toxic, and will work its magic while I enjoy not seeing any bugs.

Now if somebody can just find a safe and effective way to rid the lawn of dallis-grass, I'll be a lot less upset about being stuck in the great big barren (physically and mentally) state of TexAss.
show more
4 years ago
bugs