Music of the Moment

This cheerful one by Kate Rusby seems fitting as May rolls in.

perennial cover crop
Perhaps creeping thyme?  It's on Dr. Ingham's list, and although it will spread eventually, in my experience it does so very slowly.  The downside is that it hasn't - for me - created a weed-choking ground cover.  Some weeding would probably be necessary.  But it will provide protection, attract lots of beneficial insects, and of course feed the soil life.

perennial cover crop
As I understand it, compaction creates a toxic, anaerobic layer which roots will not penetrate.  They grow sideways instead.  Ideally you would break through the compaction layer, and introduce beneficial biology, at the time of planting or immediately before.  Depending on the depth of compaction and the size of the project, this could be as involved as using a deep ripper with tubing attached, or a simple handheld soil injector.  I've had some success pounding rebar through the compaction with a hammer, then dribbling compost extract down the hole; just be sure to check every few swings to make sure you can still pull the rebar back out.

The compost/tea/extract should have not only healthy compliments of bacteria and fungi, but also protozoa and beneficial nematodes; otherwise nutrient cycling will not happen.

Interestingly, Dr. Ingham lists some ground covers that many would shun as overly aggressive, like bugle and creeping Jenny.  These suit my situation just fine.  What works best for you will depend on your climate and your crop.
show more
4 years ago
soil
Plants for kids gardens, any ideas?
Kids always seem to enjoy the fuzzy leaves of lamb's-ears (Stachys byzantina).  It's not native to the Mediterranean, but it does do well in hot, dry areas.  It's one of the lowest-maintenance ornamental perennials I know of.
show more
4 years ago
kids 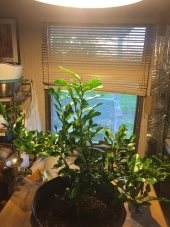 Suggestions for an indoor, low light plant that has some sort of use?

Actually that is a 'Lamiastrum galeobdolon' in the photo, so far as I can tell.  It looks to me like the variety 'variegeta', which also grows abundantly on my property.  Though it is not a vine, it does spread by runners (even becoming invasive in some places); when the runners find empty space they cascade downward looking for a place to root.  There is a variety called 'Herman's Pride', which I believe is a clump-former.

Some in the mint family are clump-formers (like lemon balm) while others, say spearmint or swamp woundwort, are vigorous spreaders.
show more
4 years ago
plants

Suggestions for an indoor, low light plant that has some sort of use?
One thought - although it's not a woody plant - would be yellow archangel (Lamiastrum galeobdolon).  It thrives in low light, and is edible, though the taste is somewhat bland in my experience.  I recently came across an article about someone growing it in a hanging pot, indoors:

Hope this helps.
show more
4 years ago
plants
Japanese Beetles on my Blackberries
I've had some success with planting tansy around my plum saplings, which had previously been completely defoliated.  Tansy can be aggressive, though.  I know the plum trees will eventually shade them.  But tansy versus blackberries?  I don't know.  It might be worth experimenting.  Or you could try cutting tansy elsewhere, and strewing it over the canes during peak beetle season.

As for the beetles, I shake them into a bucket that has a few inches of water (because they can't fly away while they're swimming), then pour it all into a dog bowl for the chickens.  They love it, it's like they're bobbing for apples.
show more
4 years ago
plants
Free Kindle novel this weekend
Hi,

I'd like to let everyone know the Kindle version of my novel is free this weekend (June 18 and 19). “The Last of the Freemen” is a dystopian tale set in the not-too-distant future, following the descendants of the rebellious Saxon Freemen, and considers the importance of culture and kinship in resisting tyranny.

Who were the Freemen? Long ago when Charlemagne conquered the Saxons, he required that they convert to Christianity or be killed. This led to some violent years, with the last holdouts being the middle castes of free and freed men, who lost not only their religion, but also their right to own property allodially, that is, without any ruler having a claim on it for taxation or tribute; thus were they reduced to peasantry. (Thomas Jefferson envisioned an allodial system of land ownership in the U.S., sadly not adopted.)

So - where's the permaculture connection?

The modern Freemen in my novel have adapted by growing as much food as possible without overlords knowing, creating a measure of freedom, and cultural identity, for themselves. I've called it crypto-horticulture for lack of a better term, and kept with plants used traditionally for food in Central and Northern Europe; what they practice is akin to permaculture.

“Western” agriculture takes blame for things about which individual Western farmers have had very little to say. As James C. Scott points out in “The Art of Not Being Governed”, monocultures are not a natural human tendency - they arise when arbitrary rule comes along. Empires love monocultures; they provide control and revenue. Mark Shepard has also commented on this, I believe.

I see clear connections between freedom and sustainability. Permaculture is gently subversive to empire. “The Last of the Freemen” arises from my imaginings of what an anti-empire, sustainable culture might look like.

You can find it at Amazon. Hope you enjoy.

Whatever the particular mechanism, synthetic fertilizers lead to a soil that lacks the full suite of life forms that support the health of the plant.

Yes, because they are salts, they bind with water molecules, and actually pull water out of microorganisms - like putting salt on a slug to kill it. (Not that I've ever done that - but I saw it done when I was a kid.) How much a soil can take before serious harm is done will of course depend, especially on how much organic matter is there to buffer it. Better to do no harm.

The protective power of soil microbes comes largely from the crowding-out effect. Bacteria and fungi in a healthy soil will cover every square micrometer of a plant's surface - root, stem, and leaf - feeding on the plant's exudates. This means there are no infection sites open for pathogens. If that layer is killed off, or if you lack the healthy soil food web to begin with, the plant is defenseless.

Besides crowding out pathogens, microbes are necessary for nutrient cycling; those bacteria get eaten by protozoa, which then release nitrogen - and whatever else the plant needs - as a waste product. Fungi will be eaten by nematodes and micro-arthropods to the same effect. All a very delicate balance that can take some work to achieve. Putting fertilizer salts on the soil can only move you away from that balance.

I remember in my youth when a bag of 20-20-20 fell off a tractor and split open at the edge of a field. Even the weeds within twelve inches of that pile of blue fertilizer soon turned brown and died. It remained a dead spot for a couple of years. That spoke to me.
show more
4 years ago
soil

goutweed, aegopodium, as a salad??
I found this old thread and thought I'd post a link here to some interesting aegopodium recipes, including ground elder quiche and ground elder & chicken patties. Overall I think it's a useful plant to have around, at least in a shady spot where you're not trying to grow something less aggressive.