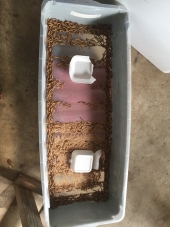 Superworms for bioremediation of polystyrene: ideas for extending the (re)processing?
I don't know if anyone is still interested in this, but I'm actually doing to be undergoing a similar project here soon! I've read several papers that mention using mealworms to degrade polystyrene, with notes that over 50% was completely destroyed, the remaining 50% is passed through, more or less, with a minimal amount of carbon from the plastic actually being retained. I found references that the mealworms can be used for other plastics as well, so my idea is to try and quantify how much the worms can eat, as a percentage of their body weight, possibly throughout their growth process, as well as see if they can do their entire life cycle on only plastic.

Superworms grow much bigger, but i remember reading that they actually are less efficient at it, though if mealworms can't do a full generation (beetle to beetle) on plastic, the superworms might be a better option just by virtue of lasting ~2 years as worms instead of mealworms constant pupating. The article I link below says that beetles were produced, but they didn't see if they were reproductive, and I had found others that said they had none survive till pupation. Some places say you need to acclimate worms on a rice diet first, then introduce to plastic. If my initial test doesn't work, I'll try inserting this step in before doing any significant changes.

The citations for it can lead you down an interesting path. One thing to note specifically is the mealworms themselves only physically break up the plastic, it's the microbes in their gut that actually process it, something proven by smearing mealworm guts over a petri dish and measuring the micro-divots the microbes ate. but the microbes by themselves are nowhere near as efficient as mealworms, likely due to the chewing up of material.

To test for microplastics in their waste, (of course i can't find mmy saved link here...) I'm going to use a simple set up of pvs with valves that works basically by making the plastics float. for heavier plastics, I'll have to use ZnCl I think, but for most just saturated saltwater should work. for this I'm not going to be too fusseed about following exact scientific handling, since for the most part it's going to be a yes or no. if yes, I'm going to use filters to try and catch enough fo the microplastics to get a sample size big enough to see if specific plastic eating microbes can handle it from there.

Ideally, I want to find out if using mealworms to eat plastic would result in safe to use frass, mealworm meal and happen with a minimum of input.

Sorry this is all sorts of rambly but as soon as weather in my area gets below 80F consistently, I'm going to order some mealworms to kick the testing off =)

show more
4 months ago
bugs
Hay making on a budget - sickle bar mower and side discharge rake
I own no land so take my words with a grain of salt but before putting time into doing something, I'd make sure it would 'pay off'. There are always bottlenecks whenever you have a multi-step process, so step 0 would be identify the bottlenecks, since an improvement there would help the whole process more. If you're just looking to cut down the time taken, then rather than mount a blade in front, mayble look at mounting it double wide. I would think any balancing issues would be worse if mounted front and back, downsides, it might not mow the area under/between the mowers. When I search double bar mowers, that seems to be one of the more popular configurations. Other option would be to cut on the same side, but somehow trail the second mower behind and offset it ~7' so they don't cover the same area. Looks to me the 'Rouse' double bar mower works like that.

For the rake, the missed hay might become a bigger issue if you run two smaller ones versus one larger rake, but thats nothing more than a gut feeling

If you're thinking of doing motor mounting, I'd suggest to check out old Horse Progress Days videos or similar. different situations, but those that work with horses often mount motors to their machinery or forecarts to power them. From what I remember from going ~5 years ago, they look more at the torque than the horsepower of the engine.

Looking at the 8n, it seems pretty small (~22hp). What baler do you run with it?
show more
7 months ago
large farm

What died in your new gardens? so far...
I had planted ~ four square feet of peas and four of green beans, should have ended up with about 36 of each. ended up with about six pea plants. the green beans sprouted, had a pair of true leaves, then died. I think I know what I did wrong -- my compost pile had been less than good and I didn't mix any of it in before a hard freeze. I did leave the dead plants in and covered the area with cardboard over the winter, but they didn't break down as much as I would have liked. basically, even after I hand tilled the area a bit (tried to minimalize it but the soil is still clay that forms a hard top), it was lumpy.

Of the nine spinach seeds, six came up. I planted more, but nothing else has come up. so my total 'kill list' of didn't sprouts is: Broccoli, cucumber,squash,carrots,beets....

On the other hand, I had tomato plants sprout in my worm bin. I transplanted them out last week but haven't gotten a chance to check them yet. I also have about 12 sprouting all over my garden that I'll have to move. I can't remember if the plants I bought last year were hybrids or not, but they were cherry tomatoes, so I'll have to buy a paste or slicing type regardless.
show more
7 months ago
gardening for beginners
What is "healthy" soil? Disturbance
I resemble one of those ;). In my mind, 'healthy' soil is soil that does not need to be micro-managed, that can raise healthy plants with a minimum of inputs -- good microbiological activity, good water retention, etc. But there is no guarantee those healthy plants are what I want, which is where disturbance comes in. Plants bred for eating just can't out compete wild plants most of the time. They're at a disadvantage, which is why pesticides and herbicides were created. So if weeds pop up in my bed, I'll yoink them. if bugs appear, I'll fiddle with conditions as much as I can to reduce them. I don't want my bed to be wild, I want it to be full of plants that are useful to me (not that there isn't overlap there), but in my mind, even if all undisturbed soil is healthy soil, not all healthy soil has to be undisturbed.
show more
7 months ago
soil

How do you use leftover pickle juice?
I know in college they used pickle juice for shots -- called a pickleback i believe. I haven't made any pickles yet, but the store bought dill juice I'll drink, just a bit at a time. I used to grow dill, I think i'll have to take it up again! I just love the taste of it. I can't think of why you couldn't re-use it for more pickles...might make a good vinaigrette base -- just add oil. https://www.thekitchn.com/how-to-make-a-basic-vinaigrette-226699
show more
7 months ago
frugality
Bag/creel limits
Okay, I'm going to preface this with the belief that the creel/bag limits set are reasonable and fair to the land, and I do not condone ignoring them.

That being said, theres something that has come up in my family a few times, that being: is it okay to overharvest on one day if you don't overharvest for the total amount of time. I know that sounds weird, so heres an example: I go camping for a weekend, daily bag limit for squirrels is six. Day one, I take three. would it be 'okay' if I took nine the second day, since it averages out to six per day?

Argument for: the bag limits are set with the idea that even if everyone filled their bag every day, the land would be fine. ecologically, the difference between taking a squirrel on a Saturday vs a Friday would be negligible.

Argument against: it's illegal, for one. for another, the bag limit is just that, the upper limit and wouldn't be healthy to harvest at non-stop. taking only six the second day gives the 3 extra squirrels more time and opportunities to be ecologically active.

show more
7 months ago
ethics and philosophy
disinfecting used hives
Let me preface this with I've never kept bees, but I have plenty of experience sanitizing and disinfecting. The thing that might be an issue is getting it clean without doing something that can sicken the new bees. To that end, taking it apart and hand scrubbing it would be the first step, getting anything organic out and off. I tried to look up bee-specific disinfectants, and found an excerpt from The Bee Keepers Review (displayed poorly so I'll just paraphrase) Where the author said to boil hives that had foulbrood in it, but if it was badly infested ot just burn it.

I don't know how toxic these would be to bees, but bleach or a quaternary ammonium solution are widely used in medical fields to sanitize surfaces. either way, even if you boil it, just having them empty and exposed to the sun is a good idea.

again, I don't know how stubborn anything affecting bees is, but a three step process of spritz with sanitizer -- leave in sun -- boil would likely kill everything on it. what the boiling would do to the wood, I'm not sure, especially since the book didn't say anything on duration. (it also reads like a book from the early 1900s, so probably outdated in every way)

ETA: its a magazine and the entry was from 1896
show more
7 months ago
honey bees 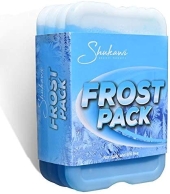 Frozen Gel Bottles for Cooling Breeder Buck
I've heard frozen bottles can be used ot keep the temperature down. if your buck doesn't snuggle it, a small fan can be used to blow air over it and cool him that way. I've seen where the air coming off a  'camping ac' that was just a fan blowing across a bucket of ice got down to 55 degrees fahrenheit, so it's potent cooling.

As a halfway point between gel packs and 2 liters, you could use PVC pipe to make polar tubes.
show more
7 months ago
rabbits
TopSoil vs compost and do I need topsoil??
commerically bought 'topsoil' is often of dodgy quality, at least near me -- some places seem to use the term to mean 'fill dirt without rocks'.  good compost has every quality necessary. truthfully, with how much compost its recommended to add to a garden, I find it hard to believe it doesn't become almost straight compost over time.
show more
8 months ago
hugelkultur
Chicken Butchering in Ohio
If you can't find anyone nearby, what you could do is dispatch a few birds early and see if you run into any issues with the small batch first. What way are you looking at doing them? I've heard good things about using a concrete pouring funnel as a kill cone and just skinning instead of plucking. guy who told me his system says it only takes him ~90 seconds to go from live to halved and ready to go into the freezer.
show more
8 months ago
chickens