being angry at bad guys vs. build a better world
Just my thoughts on the subject:

If there are bad guys in the world, and I'm pretty sure there are, it seems natural to get mad at them.

But, our anger is exactly what they want,  because our own anger blocks our ability to create a better world.   When we unite with like-minded people with love,  our power to co-create is far more impressive than anything the bad guys can come up with.

They are just afraid of us.

We can shrug them off like a bad cold, and clean up their messes like the bad children they are.
show more
3 years ago
paul wheaton's pseudo blog

DIY book on building a Timber frame house
I almost hate to admit it but I learned a lot about TimberFraming from Ted Benson's first book on TimberFraming.   I haven't seen my copy for about 20 years(bought it in the early 80's).   Maybe you can find it used.   Never had much use for Sobon's books.   Steve Chappell's book A Timber Frame Workshop is a pretty good summary of the craft circa 1995.   Most of the tables for load bearing are for North American species so they may not be useful to you.

Your other question about attaching a structure to the top of your brick walls...   you definitely want to firmly attach any wood structure to the bricks.   I would embed hooked threaded rods at least 6" into the masonry, about 6'-0" oc.   You don't want to rely on gravity to hold everything in place, especially since you mention strong winds.
show more
3 years ago
roundwood and timber framing
Basic plans or example of passive solar 2-3BR with masonry heater / masonry stove for New England?
That's very nice of Glen to post plans for a house.   Most professionals usually charge a lot.   I certainly did.

That being said, your needs would probably fit well into a 4 bent timberframe Salt Box.  2-3 bedrooms upstairs, open first floor, centered around a masonry heater.   Your masonry heater on the first floor would probably handle all your heating needs.   I don't know about Massechusets but here in NY we have to install some kind of mechanical heating system that  kicks-in if the temps get too low.

As Glen points out, a site visit is most likely required to design anything.   He has given you a good start. 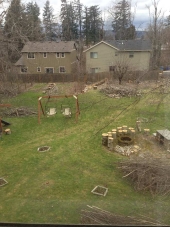 Wood chipper advice
I used to have a little 5hp chipper that seemed like a cool idea, but I really didn't use it very much because it was such a pain, so I traded it.

But, after cutting down about 50-60 Hemlock trees I had quite a mess to clear up.  I bit the bullet and got a used Vermeer chipper that could take up to 6" diameter.   I love it.   I don't chip anything that big, but it takes everything I put into it.   Turns it into nice chips that I can put in the garden, or fill-in low spots or make hugels.   Lots of uses.

I find it very important to my lifestyle.
show more
3 years ago
homestead

Roof for an adobe brick building
This is a very impressive building technique.

Apart from wanting to see what the interior looks like,  I really appreciated the care and detailing of the vaulted roof with the angled adobe bricks.   It looked like the steps were:  first- adobe brick vault;  next- a layer of cob;  next- plastic waterproofing layers;  next- volcanic rocks;  finally- the living roof.   I especially liked the care taken with the drainage.

The only thing that seemed a bit odd was the use of  'pasto en barro liquido' , the broom-thatch-like material soaked in the mud mortar covering the arches.   He says he uses it to cover the edges of the plastic tarp.  I would probably just mortar over the edge.  He covers it with red tiles anyway.

I'm wondering how this would hold up in very wet climates like New York where I live.   I've seen adobe last for over a century in the Amazon region, but with metal roofing.
show more
3 years ago
natural building

A timber frame barn
Nice job.   Especially since this is your first frame.

This helps confirm what I've thought for a long time, that just about anyone with basic building skills can build a timber-frame.   Just approach it with patience and intelligence.   And, I suppose, common sense.   Build it on your own schedule and you will have something you can be proud of for many years. 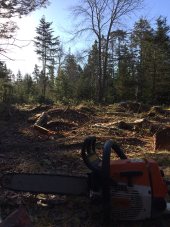 Draw backs to not removing all of the stumps for cabin site?
You can definitely do it,  but I suspect that if the cabin is intended for long-term use that you will regret it.

It's easy to span over stumps with piers and floor joists.   Just stay way clear of the stumps when placing your piers.   The stumps will dry out under the floor and will eventually rot.  I've seen many cases of folks who've done this...  the problem is that years later they regret not taking the time or spending the money initially to remove the stumps.   It's very hard and expensive to remove them when a house is over them.

If you don't have access to a backhoe or excavator you might try burning the stumps, but that is a very difficult task.
show more
4 years ago
roundwood and timber framing

sumac and its uses
We use the flowers of the red, furry kind in the smoker for our bees...  makes them pleasantly dopey, and wears off in ten to twenty minutes...  grows like mad around here.
show more
4 years ago
woodland

Brainstorming the conversion of an old attached barn into a cob kitchen
Nice old building.

I can't comment on cob because I've never worked with it.

I would suggest that for foundation drainage your best solution is to excavate around the perimeter of the building and install 4"perforated pipe at the depth of the footings (if they exist), or at least to a depth beneath the floor level.   Once the excavation is open you may opt to put 2"rigid insulation covered by adhesive waterproofing.   There are many products available like this here in the US, I don't know what may be available to you in Bulgaria.  Once the foundation is waterproofed, you should backfill with gravel or small stone,  not earth, up to finished grade level.

The uphill drain you plan to install to a depth of 1.5 meters will help a lot.   Make sure you backfill with gravel or small stone.

The downside to installing a perimeter drain on an old foundation is that it is very expensive.   The only other option is to install a sump pump inside the building.   Dig a pit about 3feet deep and 2feet wide, install  a plastic garbage can with perforations to allow water infiltration then a sump pump into the pit.   This will keep the space just barely OK.   It's not a good solution, but it is the cheapest.
show more
4 years ago
cob

Yes, you know, it my be overkill...  I really don't know.  I guess I'm still learning about this thing.

The first few firings I got very little heat out of it.   Mostly they were very small fires to just help dry out the materials, since there's really a lot of moisture that accumulates in something like this during the construction process...  with all the bricks and mortar and stuff.   After finishing the chimney through the roof, and constructing the heated benches, I was finally able to put the fire into counterflow mode last weekend.   It performed very well.   I felt good heat through the doors , though the bricks were cool to the touch for the first few hours.   And well after the first fire died down.   The benches got warm.   About six hours after the fire died down the bricks began to feel warm.   It gave off a nice comfortable, radiant heat.

The second fire is when I was sold on it.   The bricks were already pre-heated, so it got pretty darn hot pretty fast.   I can't be more precise than that since I wasn't taking temperature readings or counting the minutes.   It stayed very comfortably warm for an entire day.   At no point was it too hot.   I imagine if at any point it got too hot during the winter I could just open a few windows.   I really don't like that feeling of being driven out of the house by a too hot stove.

But, as I say, I'm just learning how to live with this thing.   So far, so good.

I've added a few more pictures of the chimney through the second floor and through the roof.   It has three flues though only one is used by the masonry heater.   One is maybe for a wood stove, and one is extra.   I love the idea of having an extra flue available for some future idea.