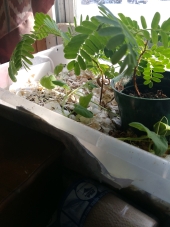 Tamarind Seedlings Indoors (Winter Care??? Help!)
I hope to see more of this project as you continue. Tamarind is one of my favorite "fruits," and the tree is beautiful. I'd geek out if I could hang out with one in WI. Plus little bitty tamarindo pods....that would be SO cute haha.

I'm surprised to hear Francesco say tamarind is almost a desert plant. I've only ever seen them in the humid tropics. What makes you say that it's a desert plant?
show more
2 years ago
fruit trees

Can aquaponics really be permaculture?
Paul's response seems to most astutely answer the main question.

Seems Permaculture is a system for design based in ethics. Seems it's open to interpretation. Seems there are plenty of people who include aquaponics in their interpretation (especially in warmer climes).

As to the fine tuning, I have seen a few systems here in Wisconsin, Growing Power included, and I've yet to see anybody running a system that balances inputs and outputs. There are some VERY impressive systems. The most impressive I've seen was at the Montessori school in BayView, Mikwaukee, WI. That said, it is an education tool, and even its designer believes it isn't scaled to an economically viable size (energetic inputs and outputs aside...they are grid tied). In short, they are all education tools (the systems I've seen). This isn't to downplay them- they are fantastic teaching tools- showing a "closed loop" system in one room, one with which students can interact is super powerful. It can change the whole paradigm of thought. They just aren't viable food production systems as far as energy input/outputs are concerned (in this climate). I'd also like to say that the system at Growing Power has some significant issues. It is SUPER cool, and is the system that turned me on to aquaponics, but it's not a poster child for a viable temperate system in my eyes.
show more
3 years ago
aquaponics
Best place for mushrooms in aquaponics system
Jim,

I am still looking for the academic study, struggling to find the link atm (I may have saved it on my home computer), but here is some diy research that looks decent and may address this idea in a similar manner (I won't know for sure until I can crosscheck with the other article):

Cheers,
Robbie
show more
3 years ago
fungi
Best place for mushrooms in aquaponics system
Hope it's no nuisance to revive this thread....There is a good idea about incorporating log cultivation in the Bio-Integrated Farm published by Chelsea Green, which was published after this thread.

As for using the mushrooms as a biofilter, there is a great post by a phd student about this on the shroomery.com forum...

I'm also wondering if anybody has any thoughts about using myceliated substrate as fish feed? I know it has been studied and used effectively for cattle feed. Anybody know about using it for fish?

I like the idea of using the maggot infested mushrooms but would rather eat the mushrooms...now the myceliated substrate we can't eat.

Anybody pickin' up what I'm puttin' down?
show more
3 years ago
fungi 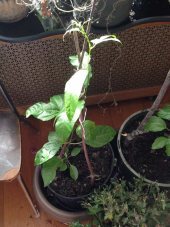 Anyone has tried to plant passion fruit vines in containers?
I have both P. incarnata and a more tropical species of genus Passiflora growing in a sunny window in WI right now. The maypop has a fruit, although it hated the transition from outdoors to indoors and is still recovering from the move in early October. It is definitely possible. They can also produce fruits given appropriate conditions. I have found the hardest part to be giving them enough to climb on indoors. While I was living in Panama, where they can grow on the fence line all year long, no problem! In Wisconsin...different story.
show more
3 years ago
seeds and breeding