Merit Badge profile
Born in The Netherlands, now living on our permaculture farm in Colombia. College degree in town planning, worked in research for some time, started my own company in graphical design after that. The economic crisis of 2009 wrecked my company, which made me severely think what to do next. After much research and some feelings of despair I stumbled on Permaculture as the obvious solution for both my own future as well as the future for our planet. Bought a 10 hectare farm together with my partner in 2014 and we're working on setting it up as a demonstration site for PC.
La Mesa, Cundinamarca, Colombia
wetdrytropics.org
Apples and Likes
Apples
Total received
92
In last 30 days
0
Total given
74
Likes
Total received
506
Received in last 30 days
0
Total given
533
Given in last 30 days
0
Forums and Threads
Scavenger Hunt

Preparing for a short-term power outage
We're having those power failures regularly. Half of them last 15 minutes or less, no idea why. Most get resolved within a day or so, but some last way longer. The longest was 8 days when lightning hit the cables on top of our mountain. Because we're at the end of the lines only a few houses were without power and that meant we were no priority. So we ended up being the last people who got the power back. Over the past weekend we had a severe thunderstorm and we were out again from Friday evening until Monday afternoon. It's a recurring thing here.

Honestly it's mainly annoying: no light, no music, no internet, no coffee machine, etc. The only thing that really matters is if you have a freezer or a fridge with a significant amount of meat or cheese, or similar. Veggies go bad too, but slower, and they're cheaper to replace. To preserve meat for a bit longer you can cover it in salt, but that still has limits. The best way to not let meat spoil is to keep it alive, as in meat chickens in the pen and only take out what you need short term.

Cold mass as mentioned above with frozen water bags or something similar added to the freezer for sure helps a lot. I remember when we killed a pig and had a freezer full of frozen pig meat we also lost power for 2 or 3 days, and because of the sheer mass of frozen meat the temperature in the freezer never got above freezing. It was just a matter of keeping the freezer shut until the power came back and we could check how it all came through.

I think the best way to prepare for power outages is to have a garden and a bunch of living meat chickens. If you're in a cold climate in winter, probably blankets and insulating materials matter too. Remember to think of closing your waterlines and emptying them if it freezes where you are. At least in those climates you can simply put your meat in the cold outside when you loose power...
show more
9 months ago
survival

snake boot HELP please
I'm just wondering if you really need specific boots. Most boots are not close to your skin, there seems to be always space between skin and rubber. Also we have snakes here but none of them are very aggressive, most just want to get away. Are you sure you need such protective gear?
show more
1 year ago
survival
Ecological economics
Thanks for sharing! I just finished reading the whole article and it indeed was a good one!
show more
1 year ago
financial strategy

Need advice on starting a tropical food forest
Did you think about having a small meat chicken house inside the greenhouse? They don't need a lot of space and they will add some heat to maybe keep things above freezing. After 4 months of doing heating they can go into the freezer as a good measure for irony

show more
1 year ago
forest garden
Natural remedies for diarrhea
It depends on what is causing the diarrhea. I've had problems with parasites (amoeba). That's not your average bacterial infection that goes away relatively fast. The only thing that worked for me was raw garlic. About 6 medium sized cloves, once a day every other day. Relieve started after a week or two,  but since parasites are notorious for hanging around I needed to repeat this every second week for months to get them out and not show activity again.
show more
1 year ago
food as medicine

Opinion on nationally produced but packaged with plastic or overseas produced but uses less plastic?
First thing, the smaller the space the more productive you can make it! Why? Because you can invest more time per square meter to weed, water, fertilize, guide, layer, etc. Don't underestimate how much food you can grow in just 30m2! Or even on a balcony or a window still...

For plastic packaging vs distance, I would think it's best to go for local first. Plastic or not. Complain about the plastic to someone closer to you and the chances are bigger that they pick up on it. Anyone far away will probably just ignore your complaint. Plus if supply lines will ever fail you have at least encouraged a local supplier. That's good for redundancy.

It's not really ideal answers I have but I hope it helps you move forward a little. Let's focus on small steps forward instead of being paralyzed or slowed down because of the need for perfect answers.
show more
1 year ago
home care

Which earthworks are appropriate for our property ?
We have similar slopes as you have, also heavy clay, very sticky when wet and very hard when dry. We have noticed that rainwater barely infiltrates in our soils if we do not break up the dense layers in the topsoil. Since we have to do that anyway in the areas we plant in, and we do not want to loose any rainwater, we terrace everything.

We're making small terraces, so that if maybe we'll have an accidental washout the damage is limited. All terraces we make have a slight angle, where the downslope side is higher than the upslope side. In heavy rains that means excess water won't flow over the edge, but it will flow to the backside of the terraces. Like this you can easily prevent erosion. We built stairways of rocks, which are also the spillways for excess water. When you try to retain rainwater it is very important to always have a way for excess water to escape.

The picture below shows how it looks after it's done. It works great, we also regularly have 100mm per 24 hrs rain (actually it falls in just a few hours) with one big event where we had 90mm in just 90 minutes, and we had NO runoff from the terraces. It all went into the soil. Very happy with that.
show more
1 year ago
earthworks

Bears- problem is the solution???
I'm wondering how many bears you have to deal with. One or just a few or a lot? I'm also wondering how many hornets nests you have to deal with. A few or a lot? Mostly if we leave nature to do her thing, it all stays within some balance that prevents us to have to deal with problematic excess. Are these problems a real excess or are they bearable (haha, pardon the pun)...  The main thing is if we are dealing with a problem or just with our natural surroundings?
show more
1 year ago
predators 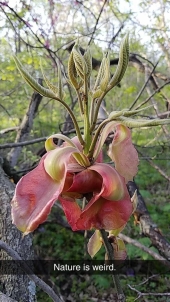 Amazing Nature - what has wowed you lately?
I saw 2 pumas crossing the road right in front of me when driving home. It was about 500 meters before reaching our land. They ran and jumped and I realized they were pumas because they looked exactly like the logo of the puma shoes when they jumped over the road. I would say about 2.5 or 3 times the size of a cat. I was amazed... I never knew they lived around here.
show more
1 year ago
meaningless drivel

How to deal with permaculture overwhelm?
When we started a little over 6 years ago, we got advise from a seasoned permaculture designer telling us to "do nothing irreversible yet!!"... We thought that wasn't helpful because we needed to at least do something. So we did, we started all kinds of projects on several places. We got some results and a bunch of failures.

For the big things: water, access and buildings we started with water: a test swale here and there and some ponds on the keypoint where the mountain slope changes from steep to flatter (which is obvious stuff according to the theory). We dug a road almost on contour to improve our access across the land and we refrained from building anything else than pig pens. Most of all we learned to observe a lot and to do little things and then observe what effect they had.

From the obvious stuff we slowly went to improve water retention and access more and more. Until we finally figured out where we wanted which structure for what reason. That whole process took 5 years, but we do have a very solid plan now. It just took a lot of trials to improve understanding. So my advice would be to try and observe and try and observe; always on a small scale until something becomes obvious to you. What becomes obvious can then be planned to make it happen.

Never rush things, but never stop interacting either. Be patient, look at what happens. Try to understand the patterns. Water is always paramount. Access always leads to options. And structures are simply needed to solidify a site design. In the mean time whatever you do or try, always try to gain a yield...
show more
1 year ago
homestead