paul wheaton wrote:Click on the thumbs up for this post if you are willing to pay $72 to get a dozen books (+$50 for outside the US)

I have one question, when can I order the 12 books. I'm still a working person, but I would love to be able to share these for Christmas. Yes, I have read the book, parts of it several times. This would simplify my Christmas shopping immensely.
show more
1 month ago
tinkering with this site 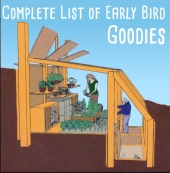 JohnW Moody wrote:Thank you everyone!


Hi John, It's great to see you hanging out and answering questions here at Permies! Do you recommend using willow water to help the cuttings get started?
show more
8 months ago
food as medicine
Digging my own Ditch for Thirsty Elderberry Bushes

Cindy Loos wrote:Question..  How do you raise the "blue" elderberries that are native here?  They seem to be very picky compared to the darker berried varieties.
Does anyone have experience with establishing these?  Our soil is clay. Zone 5. Idaho
The buried hugel just might work with these... thank you.


I will also be interested in this answer because I am in Utah, clay soil, zone 6A. I would presume what works for you will work for me! My general guide for growing things in clay soil is simple, add more organic matter. I will often take the smaller branches from pruning and dig a one foot deep ditch, place a layer of trimmings in the bottom, return the soil and mulch heavily. Always on contour. It may not help, but it certainly doesn't hurt.

*Welcome Dr. Sharol Tilgner, Author of Herbal Medicine From the Heart of the Earth!
Hi Doc, Glad to see you here!

show more
8 months ago
medicinal herbs
testing the new look and feel from non-logged in users
Just took a look at the new format. Personally, I like it. Easy to navigate and visually attractive.
show more
4 years ago
tinkering with this site
What do I need starting out?

Deborah Niemann wrote:Welcome to the wonderful world of goats! Most people feed hay in the barn: grass hay for dry does or bucks, a grass-legume mix for pregnant does, and a legume hay, such as alfalfa or peanut for milkers. When you say "down branches," I'm picturing branches that have fallen from a tree, and they usually have no leaves left on them. If you mean branches that you've cut from a tree, and they are covered with green leaves, that would be fine. Goats need green stuff for vitamin A. That also means no brown hay. Some people think that goats will eat "anything," but that just means things like rose bushes, not low-quality forage.

We just carry buckets of water to our goats in remote locations. It's rather old school, but it works.

As for a medical kit, you don't really need to keep much on hand with only for goats, as the odds of something going wrong are pretty slim. I try to remember to keep a bottle of antibiotics on hand, even though they usually get thrown away unopened after they expire in a couple of years. It seems you only need them at 2 a.m. or Sunday right after the local farm store closed. You do need a thermometer for them, however, because if a goat is acting off, you need to know if it has a temperature. A goat that is just laying there not eating could have an infection (high temp), could have hypocalcemia if she just gave birth (low temp), or could have a bad case of parasites (normal temp). Treatment for those three things are all completely different.

Since I wouldn't want to sit on chipped branches, I wouldn't attempt to use them as bedding for my goats. Their skin is not thick like cows, so it's not that hard to wind up with a damaged udder or other body part, although the udder would certainly be the most problematic. Plus you will want to sit with your goats sometimes, so it's a good idea to have comfy bedding. If you are in a colder climate, straw is the warmest option for bedding. Wood chips do pretty much nothing in terms of keeping you warm. I know this from spending many hours sitting out there with does in labor.

No worried on the dog and chickens and the goat minerals. They will ignore them, and even if they don't, they won't hurt them. But I've never had a dog or chicken pay any attention to the goat minerals. You need to get loose goat minerals (not a block) because goats have a soft tongue and may wind up deficient if you get a block because it's too hard for them to get enough minerals from it. I get the $5 two-hole mineral feeders that they sell at Tractor Supply and put baking soda in the other dish.

My book, Raising Goats Naturally, of course goes into all this and more in 300 pages, so it's kind of tough to summarize most important stuff in a forum post.

There is a lot of information in your response. Wow. I am hoping to move to where I can buy some land and raise animals. I have enjoyed goat's m ilk in the past. Thanks.
show more
5 years ago
goats, sheep and llamas
what is the most simple backyard biodiesel method?
Sounds like making biodiesel is somewhat beyond the scope of my current plans. Guess I'll need to read the book before I decide.
show more
5 years ago
biodiesel 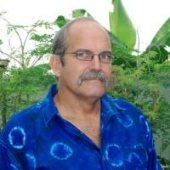