finally figured out what to do with BIG zucchini !!
We fill them. Slice in half, scoop out seeds (I save ours), scoop out some meat. Then chop up the zuke meat and mix with hamburger. You can add tomato, sauce, rice or peppers if you like. Then cover with cheese and bake. Delicious supper and leftovers for days!
show more
6 months ago
urban
Dear Easter Bunny,
Dear Easter Bunny,

Sorry I'm writing so late but I've been very busy. I know your in the area so I'm finally going to bed but I just wanted to ask you quick for one favor. I don't need chocolate or any other candy. I'd just like to ask for a nice warm, not too wet spring so my little piece of heaven here can grow some delicious food. I will even be happy to share with your relatives that live out in the big field. Thanks a lot little dude, talk to you next year.

Help with the ID of this plant

Greg Martin wrote:Check out this description:  "The leaves of this tasy little herb are excellent in salads, soups, stews you name it!  It has a very high protein content of 15-20%. The leaves are also very high in Iron, and a good source of Calcium, Chromium, Cobalt, Molybdenum, Magnesium, Manganese, Silicon, Zinc, and Vitamin C." and "Tastes crisp and juicy like snowpea shoots!"

That explains why my goats all go nuts for that stuff.   It sounds like I need to be eatting the stuff too.  Maybe I wouldn't need to take my mineral supplements either.

From what I read it has many health benefits including aiding stomach, lung, and heart problems. I'm gonna be fighting the chickens for it all summer!
show more
10 months ago
plants

Help with the ID of this plant
I absolutely think your right! I found another pic on Google that looks exactly like what we have. Thank you so much!
show more
10 months ago
plants

Help with the ID of this plant
Mom has a little flower bed in a nook beside the house facing south. Things are starting to green up there already. This plant just sprung up last year according to her. I've never took notice of it anywhere else on the property. She says it grew continuous through the year. It a low ground cover. Has a strong smell like pea pods and a light taste of the same. Tonight I fed a small handful to my chickens and they went nuts over there first fresh green stuff of the year. I'd like to know more, any info would be appreciated!
show more
10 months ago
plants

So, what's your favorite "adult beverage" ???
This time of year I crave sweetness so it's Vodka or Gin in soda usually Mt Dew or Code Red.

Summer is for Beer. The hotter the day the colder the Brew. I absolutely can't wait!
show more
11 months ago
meaningless drivel 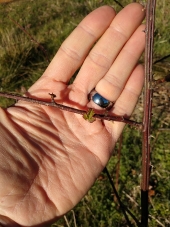 First signs that spring is coming
Here in central PA we had a spring like day on Monday, it was sunny and hit the low 60°s. Of course we are now back into the muddy, chilly, windy February I expected. This morning it was pouring and like a switch was flipped it started snowing. We only got 2" but it's COLD now. Enjoy your green guys!
show more
11 months ago
meaningless drivel

In defense of a Rooster
In August of 2018 my cousin moved her little hen house and 5 hens onto our property after a falling out with her father in-law where they were being kept. A month later another cousin got 3 hens and a rooster off of Craigslist. Already having a roo he asked if I would take him so of course I did. I named him Brutus The Rooster Chickencake (any Wrestling fans will understand) and he became my favorite. He was close in size to the hens but for what  ever reason he would not stand up to them. He was completely hen pecked, it was so bad I would chase the girls into the house so he could eat. All the poor guy would do is sit in a corner of their little yard looking like the saddest thing. He wouldn't even crow, I actually was beginning to think he was damaged somehow. This stayed the same through Christmas but then little by little he started to insert himself. Then early one morning in February I heard him crow. Within days he was a brand new bird crowing non stop from 5am on. He would mount any girl anytime he wanted but at the same time they ate first, he always came outside to make sure things were cool before letting them out and once when a squirrel got inside their fence he killed it.
Then in late April my cousin decided to move her hens to her new place. I decided to keep Brutus so we built him a coop and run. He would cluck and Crow and look all over for his girls. I felt so bad. Finally in May I found a hen and 2 pullets for free in the local paper. They was as wild as could be, in fact we had to use a box trap to catch them. Brute was the happiest rooster ever to have a new family. He tolerated the little ones but completely doted over Mama chicken. She stood up to him too, they was a perfect couple. Then one day she got spooked by Brutus while I was tending them and flew out of the coop. I tried for a week to catch her but couldn't and then one morning she was gone. I couldn't find any sign of her demise but we have not seen or heard her in over a month.
At first Brutus was devastated. He would stare at the tree she had been roosting in and cluck like mad. He wouldn't hardly eat. After a week or so he snapped out of it. He still tolerates the young ones except when it's feeding time. He is a jerk then lol. I'm hopeful once they reach breeding age he will be better.
That's my crazy rooster story!
show more
1 year ago
chickens
my first role model...aunt bea
I can't like this enough, thank you for sharing!
I often think of the knowledge that we've lost. My grandmother was a great Gardener and could grow anything she was born and raised on a farm. She was my everything and I hers and I spent the first 18 years of my life basically glued to her side but still I only managed to learn a small fraction of her knowledge.
show more
1 year ago
homestead
Quitting Smoking
I started smoking at 15 with my cousins. I loved it! Everything about it, the taste, the smell, the alone time, often using a cigarette as a reward after accomplishing a task. After I got married my wife would ask me to quit but I didn't want to. I did cut back at home to around 2 a day. Never could give up my before sleep smoke.
As time went on I promised the wife I would quit when I turned 30. I did just that for 6 months. That's when I came home one night from work to hear her say she wanted a divorce. This caught me completely off guard out of left field and devastated me like nothing has ever done before. We tried to fix things but she left 6 months later and I was up to almost a pack a day.
I tried to quit a few times over the last 10 years but it never stuck more than a week. My boys asked over and over but I couldn't. I'd hide it from them so I didn't have to hear it anymore. I'd have 1 or two a day at home but smoked every chance I could at work because I was miserable.
March of 2017 I decided I had enough and was leaving the 9-5 on my 40th birthday a year later. I started to save any money I could. My Cigarettes cost almost $8 a pack here do I switched to grape little cigars. Best thing I could do! I only smoke a half at a time they are so strong. Now almost a year after leaving my job I'm pretty stress free and hardly smoke at all. I will have one watching the sunset, with a nightcap, or before bed but it's not a addiction anymore. I'm breathing better too. When I smell cigarettes I still want one but I know I won't ever go back.
show more
1 year ago
personal care