Comfrey Bocking 4 and 14: Clarification Please?
OK ... so I have Comfrey from two different sources.  At least one said she'd grown it from seed.  How do I know which variety(s) I have?  If they came from seed, does that mean neither is a Bocking 4 or 14 either one?  They were given to me as cuttings, however.  But I assume that doesn't tell me anything.
show more
2 years ago
plants 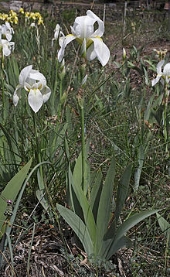 Iris as guild members (not including water iris)
With regard to "guilds":  I'm not hearing much mention of iris's... specifically NOT water iris's.  I live in the high desert of Arizona.  I'm interested in building guilds and I do not know what to think about iris's in that context.  They are survivors ... drought tolerant... and persistent.  They'll come back even after a bad year for them usually.  I haven't seen much pollinator support coming from them although I wouldn't totally discount that function.  I do believe we need to be aware of the need for pollinator support here, especially in some seasons.  I've been so focused on edibles, that I haven't paid a lot of attention to flowers and would say in general that I'm not too interested in weedy little flowers ... I'm reconsidering that point of view.  So ... can anyone tell me what they think of iris's as contributors to a permaculture guild?  I'd acknowledge that they can help fight erosion.  But mine this year were very tall and lush and produced an abundance of flowers ... to the point that they're taking over the world and I'm trying to decide how much is too much.  I've moved some to under my fruit trees but I've heard some comments that they compete with the trees (a common 'non-permie' position to take).  I've recently heard that amaryllis provide mulch under trees, but the iris don't die down in that way.   COMMENTS?
show more
2 years ago
plants

How I Built A Stand-Alone Rainwater Catchment System

Gary Lee wrote:Here's one I built two years ago to irrigate garden and a few small fruit trees. Algae is starting to build up on the inside of the tanks so I do need to clear that and paint the tanks. Basically I catch rain off 1/2 front slope of the roof and 1/2 back slope of the roof. Runoff goes into two rain barrels, drains into a 4" pipe buried underground, goes to a small pump sump and is then pumped behind the workshop into a 4-tank IBC setup. The rain barrels are just buffers so that, if a hard rain dumps more water than the sump pump can handle, it temporarily fills the barrels instead of overflowing onto the ground.

The four tanks hold a total of 1100 gallons and I capture 600 gallons for each inch of rainfall. So two inches will fill the tanks from bone dry. The four tanks are daisy chained together with 1-1/2 pvc, which allows them to fill equally. The pipes have to be drained in the winter or a freeze will crack them.

Debris is filtered from the pipes by dropping them through a kitchen strainer and a paint strainer, before entering the tanks, and the irrigation pump pushes water through a 50-micron filter so that no debris will clog the drip tubes and emitters that water the plants. Been working great for two grow seasons. I plan to add at least two more tanks this year because there were a couple of times last year that I ran them dry and had to irrigate from our well water. If you use a pump instead of gravity-feed the irrigation, you have to add a check valve on the inlet side of the pump, otherwise the pump will create back pressure and blow bubbles in the tanks or blow out a pipe. Found that out the hard way.

Your system has elements which could solve my problems.  My property is too close to flat so gravity doesn't 'work' all that well for my drip system.  I have 8 (90 gal) rainbarrels installed in 4 locations due to various pitches on the roof.  They share the drip system with a previously installed city water system which is fully automated and balanced.  Using gravity the elevations result in some of the drippers getting very low flow, and it is completely manual.  In fact it's complicated to use the water.  I think I need to add a pump somewhere, somehow.  I haven't gotten that figured out.

How I Built A Stand-Alone Rainwater Catchment System
I believe that peroxide also kills pathogens.  A local RO system maintenance company here was using it to sanitize.  It doesn't leave 'chloro...' compounds behind.
show more
4 years ago
rainwater catchment
I found out that people eat field bindweed here (Convolvulus arvensis)
What one species will/won't eat doesn't tell you about the effect on another.... Keep that in mind.  My sheep would eat all the rhubarb they could reach.  And amaranth is poisonous in some seasons to cattle.  I am disappointed to learn that field bind weed isn't edible after all.  I hadn't tried it, but finally had some real good out of the lambs quarters/goosefoot which came up in my garden this spring.... DELICIOUS!
show more
4 years ago
wild harvesting

Swale or pond
On this topic... the sewage treatment plant uses several 'recharge' ponds to return water to the ground. They fill them sequentially, moving the drainage from one to another. Evidently this prevents the ponds from sealing up by drying out between recharge cycles. I can't tell you with authority how or why, but my guess is that the sludge drys and cracks instead of filming and sealing.