Ben Veenema wrote:I make raw milk into raw yogurt instead of consuming it as a liquid.

I'm not a "milk drinker" person. I feel weird drinking milk by itself for some reason... maybe I'm broken.  But I love yogurt.  I use a crock pot and temperature controller to keep the temperature at 120°F, high enough for the yogurt cultures to work but hopefully not high enough to kill the beneficial organisms in raw milk.  I suppose you could also use the low temperature yogurt cultures but they don't make a nice, thick yogurt in the end.

Ours is cultured at 110°F. One gallon of milk warmed (preferably still warm from the cow...it speeds up the heating), yogurt culture added & whisked in, put in the jar, wrapped 2 huge fluffy towels, and set in a warm place for 8 hours. Temp @ 120°F sounds a bit high. I get my best results at 110.
show more
11 months ago
food as medicine
Elderberry varieties
Thanks. We are considered zone 3.

I know of nobody growing elder here. I imagine someone has tried, however, as a big box store was selling the "Black Lace" (a proprietary variety anyway) cultivar.
show more
11 months ago
food as medicine
Raw Milk
We have had milk cows for about 19 years. I was the primary milker of the family cows in my teen years. My favorite of all the types? Of course, the jersey!

I noticed that when I had to drink store milk, that I quickly gained weight & my stomach hurt badly, like I wanted to die. The stuff tastes like it was overheated & like plastic. It is nothing like raw milk. I have learned since that there is a lot that changes the milk composition from the start, by choice of dairy feed supplements (milk is ruined already right here), all the way through the processing, to the store. I will never drink it again. Raw only is the way to go...and it is certainly financially worth having your own animal. There is so very much you can make with the raw milk that saves money.

As far as naysayers, I just let them be. They will most likely never understand. I know what works. They really don't know what they are missing.

I have known a few people who could not drink the conventional stuff be able to drink raw with no issues.

As far as colostrum, some cultures eat it as a pudding. We tried the stuff as is and tried the pudding. It is very powerful, both medicinally & in flavor. It has the worst flavor in our opinion. BUT it is regularly used to save calves that lost their mother's, and we have seen it extend a dying dog's life (from totally down & almost limp to running around), kittens who would have died within hours to the pudgiest, strong little furballs. The egg and other things we tried didn't match the colostrum's power. It is certainly a miracle-laden superfood.

If I had to use it for myself, I don't know if I could bear to taste it...but it makes me wonder what aches & pains might disappear if I could.

show more
11 months ago
food as medicine
Plants that substitute as drinking straws, for those who need straws in order to drink

elle sagenev wrote:Ohh. We have tons of wheat around us. I'm going to have to make a straw out of it. My daughter believes she can't drink without a straw half the time.


I did this, but was unsure if they could be reused, so we only used them for water or three them away after use. I used my pruners after the stalk had dried. The cut pieces flew everywhere. The ends didn't always cut cleanly either, but were okay for use. 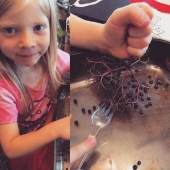 Elderberry toxicity and tinctures
I appreciate people sharing their knowledge about elderberry. I have been frustrated lately about all the misinformation lately.

I will certainly be adding these books to my must buy list.
show more
1 year ago
medicinal herbs

What Green Burial Techniques Are Out There? What Would You Want?
For me, put me in the ground in a pretty spot and plant a cottonwood. I love trees and those are so majestic.

Anyone know the laws for Manitoba, Canada? Years ago someone researched and found that a $100 legal burial here was possible, and it had many green aspects to it...pretty much all of it in fact. Can I find that original CBC Radio documentary? No...