+ Follow
12 Posts 1 Threads 3 Apples
since Feb 27, 2014
Merit Badge info
Working and living in Amsterdam combined with a life off the griid on our 4 acres property in Ardennes, France. There we run things mainly to improve ecology and have some permaculture food production. No domesticated animals so I'm enjoying to do 'the pigs work'.
Amsterdam and France
groenetenen.nl
Apples and Likes
Apples
Total received
3
In last 30 days
0
Total given
0
Likes
Total received
19
Received in last 30 days
0
Total given
6
Given in last 30 days
0
Forums and Threads
Scavenger Hunt 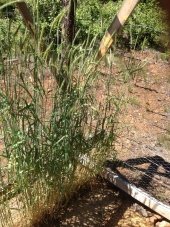 Where could I get hold of the Multicaule Perennial Rye?
---

Hi Paulo. I've just read your posts. I still have some available from my original box (read https://permies.com/t/120/1316/Sepp-Holzer-perennial-grain#405677, besides the kilogram I save for my own garden. You are in Austria so that shouldn't be to difficult.
It's a pity that Sepp is so mysterious about it. Have you tried to contact his son Joseph? Joseph at Krameterhof. Maybe he sells it... that's maybe the easiest way.
show more
3 years ago
plants

Hi Cody.
There are some advantages:
This grain is specially suited for infertile difficult soils and rough climates and not necessary for high yields. It's also a nutricious dense rye, so allegedly more healthy.
Another pro: it has a root system which can go very deep into the subsoil, up to 3,4 yards, creating carbon pathways into your soil and bringing up nutriënts from deeper layers. So even if you don't eat any of it, that makes it worthwhile.
It's hight, up to 8 feet, makes it suitable for making sheafs (so your crop can have a slight natural fermentation, which is better and healthier for the digestion) and it also leaves you a valuable long fibre for all sorts of crafts.
It also looks nice and impressive in your fields...

Sepp Holzer's perennial grain
After some intensive searching I recently have obtained a box of this exclusive grain from a source in Germany who got it from a farmer who has been producing it for about 8-10 years with original seeds from Sepp. They call it Secale multicaule or Waldstaudenkorn.

This is what I found out:

Sepp Holzer calls this ancient grain (=Urkorn) 'The Grandmother of all rye' (Großmutter de Roggens). It has been used in Slash-and-burn farming probably for thousands of years and it was sown without ploughing.
Also hunters used it in a mix for small mountain vegetable plots in the woods.

Years ago a german farmer obtained seeds from Holzer and started cultivating it as a pioneer project and he is now growing it locally in 'small' amounts (2,5 acres).
There are several farmers in Germany growing it these days so it is on the march. It is not certified for seed selling, allthough it is allright selling it for making bread as far as I understand. It is hard to get it due to the small production.

He prefers to sow in the spring and than mows it twice the first year (or let sheep graze on it). Then the plants get strong and the next year he harvests in autumn. This increases the harvest with 30%.
Other farmers mow it as much as three times before letting it come to full growth. After harvesting the plants die.

Sepp's own instructions can be found in The rebel farmer (page 270 of "Der Agrar-Rebell', I only have the german version)

Well, that's all I found out so far…

show more
4 years ago
plants
support thread for people trying to download freebies from dailyish email
No problem... although the first time I succeeded as well
show more
5 years ago
tinkering with this site

RichSoil.com articles odd looking when using Internet Explorer
My IE version is 11.0.17 is well.
show more
5 years ago
tinkering with this site

I checked it in Firefox and Google Chrome and they work well there so it's an internet explorer thing.
show more
5 years ago
tinkering with this site

RichSoil.com articles odd looking when using Internet Explorer
I was watching the articles Cassie redesigned recently on RichSoil.com (DE, Cast Iron & Flea comtrol) just to see the results but in Internet Explorer it looks like something went wrong. At least on my computer. All these pages have large amounts of white spaces and are endlessly long to scrawl through?!?!? After reloading it get's even more funky...
show more
5 years ago
tinkering with this site

Kevin MacBearach wrote:When you say 'spread it around," do you mean to the garden, or pasture?

I mean you can use your Original patch to innoculate other woodchip patches or even try innoculating places where there is a lot of woody (carbon rich) mulch such as your garden maybe.
You can also add fresh straw to your patch each year to keep it going.
But if you can get more woodchips you can grow a good cash crop of Wine cap mushrooms while at the same time you're composting the chips in your garden.
show more
5 years ago
composting

Kevin MacBearach wrote:Oh wow! That's a whole new side of farming to me. Looks very interesting. Is that solid mulch? Is it all coniferous?

It's a mixture of spruce, pine and fir, mostly shredded spruce christmastrees (only clean ones without sprays) and there were probably some chips from broad-leaved trees already on the spot. Some additonal fresh straw will also do, I usually put on a layer of wet fresh straw first. The mycelium also needs some soil microbia in order to grow... mixing some compost will do.
The Wine caps (also known as King stropharia, Garden giant, Godzilla Mushroom) are usually not difficult to grow. And once you have a settled patch, you can spread it around as much as you like.
See also: Wood chips and King Stropharia >> on the forum.