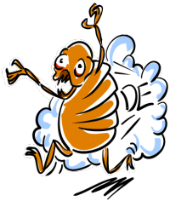 No hahahah, I will never believe that! Sure, pesticide dust is $25 for 1.25 lb while for $2 more you could get 50 lb of DE. No way pesticide-selling companies would feel threatened by DE

) And if any of you wonder why pest control companies don't make the switch to DE...is simple. It is dust and that takes a little longer to apply versus liquid insecticide which could be laid in 10 minutes for a nice, by-the-book insect barrier. With DE...at least 20 minutes if the guy is good and pest control companies don't care about anything more than time and how many customers can they squeeze between 11 and 1115 hrs! A pest control tech will never have the time to use DE and that explains why all good things in life come from non-industry-giants...from small companies with time to think and perfect the pest-fighting protocol without having 10 managers and supervisors and vice-presidents pushing them to sell more, to do more accounts, to move faster, to freaking fly if possible hahahahha...For example, I worked for a company that gave me 1 hr between stops then 45 minutes then 30 minutes then kept 30 minutes on daily schedule but added some customers during the day over the phone, schedule be damned! Why? Money. Now, what if the job is not done right? Who cares, managers need to show profit THAT day and what happens tomorrow with call-backs and stuff...they will deal with that tomorrow so they load up the day like it has 50 hours in it and you can't load up a day and expect the tech to use dust...they barely have the time to use liquid so forget dusts, forget DE. And that should just about answer the logical question of why pest companies don't make the switch to a cheaper, more effective and safer product? As for...does DE works, the answer is depends who is using it. Baseball bats work too, every tool works and no tool will ever work, depending who is using it. For me, DE is king but then again doing it for a while you get good at it. Doing anything for a while makes you a pro in that thing so I can't say I'm good because I'm good but because I had the time to play with it. I would have never had the time to discover DE wouldn't be for that big company deciding to cut costs and get someone else do my job for less money and now, more than 2 years later, everybody's happy: that company spends less per tech, that tech has a job, pesticide-selling companies still have a loyal customer there and me...I am doing DE-based pest control, have more money than ever before and still be back home in time to pick up my kid from school. Life's good for everybody I guess. Pesticide-selling companies though...better have plan b ready because I don't know how many people are having their homes treated with pesticides but I know is less than yesterday and a lot more than tomorrow.
show more
6 years ago
toxin-ectomy