Nomad Family looking for homesteading situation
Has anyone moved to a farm yet?
show more
4 years ago
land shares

Black Locust Pilings
I'm told there are locust posts in the fencelines around me over 50 for sure... why not sit it on plinths though? There are threads with detail a great answers on the subject
show more
4 years ago
roundwood and timber framing 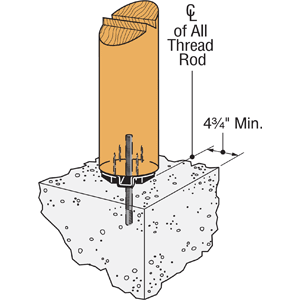 about post and beams and stone foundations -preventing rot
do you know if the taza and the muella are there only by gravity, & is the muella to protect the ground beneath from excess direct water?
show more
4 years ago
roundwood and timber framing

Building a medieval capstan with hand tools, video
was that a Mr Chickadee video? I have been watching those with my 6yr old. someday... all exept the sawing, but the 6 yr old can do that when he is big

show more
4 years ago
woodworking
Barn on a hill
I want to build a barn, but I am not working on a level 2015 cement pad… in fact i do not get along with cement in general. It looks so easy, but has hidden costs and problems etc. Before I leap in, I would like to describe the site and my plans & see if anyone can poke holes or point out better ideas. First, the back wall about six feet higher than the front wall. The good part is that it is a rock ledge, and gravel run. But what do I use as a foundation? If I were doing a timber frame i would set it on plinths, but i am not likely to have that option…

Natural Building/Asian Timber Framing Workshop with Jay C. White Cloud
I'm sorry to read about the fire, i was scrolling down to see workshop pics and was so sad to see a fire damaged shop & home instead!! I wish you well as you re-build. I do want very much to do a workshop here!!! A barn, or the small home (one whole month with Jay teaching!!) workshop would fit us to a 't'. I dont know how to pm anyone 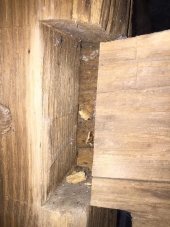 1859 ish american chestnut barn... Help!!
Hi, its great to see replies! Thank you Jay for the careful advice. & the kids are all great! Twins are huge and proof of how great nursing is (no 'food' yet!!)!!!

The whole barn is american chestnut (according to old old original family next door) The peg was pulled out (god only knows why) but the timber was intact at the time when I had it first looked at. The 'expert' who visited thought he could see a peg, He also thought that the dinky stick built additions on either side would "keep the building in place regardless". I did not really agree, but left it alone.

Two heavy snow loaded winters later (2014 I couldn't get in there.. ) I noticed and posted that there was a problem. If you can see the back wall, upper left, the beam seems to be splitting due to the pull that the peggless beam allowed. So, really, HELP!

I have access to a real come-along with chains (courtesy of my electrician, who is all around handy.. but a little too 'don't worry' for my taste on these things) and we were talking about running right through the outside wall to circle the upright beam we want to pull, and the same on the other side, so that we would be pulling the two uprights to each other. (he wanted to do something like Scott said on the beam to rig the other end to, but I want to be comfortable about this) and then pull the frame together.

If we went forward on this, what do I do about the far wall? Pull it at the same time, to be sure it doesn't torque ? And do I then add some detail to strengthen the now weakened beam attachment?

Jay, are you in this area some time, on a fancy job you can take a moment away from?
show more
5 years ago
roundwood and timber framing