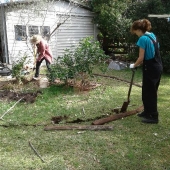 Meridie Fricker wrote:Hi all,
My neighbour has a commercial distiller visiting his property to process thousands of Eucalyptus trees to make Eucalyptus oil. We have a loader, access to trucks and other large machinery - and a large food forest needing many metres of paths..... Can I use this byproduct/waste as paths through my future food forest and other areas where weed free paths are required? I intend to use spoilt hay, sheep manure and chop + drop as mulch close to plants, but would like to mulch the paths with the Eucalyptus.
Before you suggest I’d be better off getting the local tree loppers to deliver, I’m hundreds of kilometres from these services....
I’d be nervous walking through/harvesting/pruning in my future food forest without clear wide paths as we have the most venomous snakes and spiders on the planet sharing our home (I’ve disturbed several red back spiders in the last week and encountered a couple of 2-3 metre snakes in the paved verandah/carport/pergola area surrounding the house.)
This bounty of low cost mulch on our door step could be manna from heaven.... or a complete disaster for our food forest. Conflicting reports on the internet...
Not sure what species of Eucalypts are being distilled, but I know they’re a mixed bag.....
Any help or advice appreciated!

I'm in Australia and have been using high volumes of it for a couple of decades and using it fresh from the chipper trucks.

I've used it in the tropics around pineapples and bananas and in temperate covering tomato, lettuce, kale etc.

All good.
show more
1 year ago
forest garden
Bill Mollison is gone!!??
One of the most significant Australians of the modern era has passed away and barely a whisper in the local media.

I guess there's no room when we have important things to discuss like Brangelina and who's wearing what to the domestic football awards night.

It's no wonder we need people like Bill.
show more
4 years ago
meaningless drivel
A Complete Guide to the Benefits of Holistic Management and Planned Grazing
Thanks for the post.

I enjoyed it plus I got from your list of experts, more youtube vids to watch including Gabe Brown.

Much appreciated.
show more
5 years ago
cattle
To Swale or Not to Swale

Michael Cox wrote:Bede - swales are not really pasture systems. They are designed to collect and concentrate moisture in the deeper soil where tree roots can access it in the dry season. From what I have studies Savory style rotational grazing is one of the best way to improve pasture; over time the concentration of soil organic matter increases, so the water retention capacity of the soil increases over huge areas so grass growth improves.

If you want to integrate tree crops in your pastures then swales are very helpful - this might be to provide shade, windbrakes, tree fodder for droughts, fruit and nuts etc...


[caveat - they may be appropriate in pasture systems if you have torrential rainfall and substantial surface run-off, but my experience of pasture land is that surface run off is unusual as the grass slows and helps infiltrate surface water]

Thanks so much for the reply and good advice.

I have to admit that although having purchased and read the designer manual many years ago and understanding that permaculture covers many topics including legal structures and even finance/banking systems, I had indeed fallen into the trap of thinking that swales were more than a permaculture tool and were obligatory

I've since stumbled onto the very person you mention in Alan Savoury and then further into Greg Judy and his books.

Great reading btw for anyone interested in pasture systems and now I've heard online that Greg is using Keyline to further his pasture.

Cheers Michael.
show more
5 years ago
earthworks
To Swale or Not to Swale
Hi all,

Apologies to Darren if he reads this, I really bugged him but I had to know the answers to my questions. Sorry Darren.

I was curious how in the state we live, Victoria, where we get winter rain and very hot dry summers, how does one cope with it from a grazing perspective and annual plant growth perspective and access to on farm trapped water.

I remember Darren saying that swales can act as drainage systems and from that I understood it to mean when used in the wrong environment they could actually interfere with the water flows as water would collect in bands where the swales were but little or substantially less elsewhere.

Darren's thought was that rather than widely space swales, closer space smaller earth mounds would suit our environment. (maybe the raised lines of keyline would be enough then in combination with the ripping would do more than swales.

Just on what David said about swales and winter rain, the wet in our state in winter is constant and the ground can be saturated all winter long and holding rain in swales in my opinion would stop the spread of water to the sub soil rather than spread it. Solution? Not too sure but holding it in dams (ponds) may be the answer or keyline to soak it more where it fell than in widely spaced swales.


The takeaway point would be that in summer, swales around here would be little more than hot, bone dry ditches that held the water up in winter when it was wet and do nothing in summer as it it bone dry. 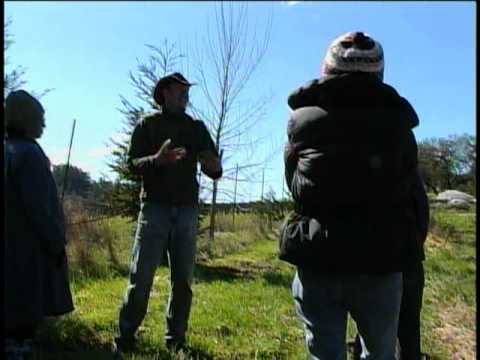 organic farmer ( Paul Kaiser) grosses $100,000/acre
Thanks so much to the two folks above who posted.

I got so much from this info.

As a young child I stayed on a very large wheat farm here in Oz back in the 70's where the owner would illegally go roo shooting every evening. It seemed at the time to be an attempt to slow and deter the roos from eating his baby wheat. Now I think it was more that he liked shooting animals. But anyway.........

In the morning he would collect the roo carcasses from the night before and feed them to his pigs. The pigs were savage animals and I've always been wary of them since.

Just to add to the mood, here is a rather apt clip from the movie Snatch where pigs V people is discussed.