I've been observing conventional pole barns with the posts made out of tripled 2x6. Many buildings get away with scabbing together a tall post out of shorter boards. One engineer I talked to thought that tripled 2x6 was stronger than a single piece of wood because of the ring systems. He also mentioned that butt joints under a compression load are fine on posts, on beams its a different story due to bending.


So my brain kicked into gear and I thought "Hey, we could cut really complex joinery like dovetails that are really just two wedges and everything for the posts on scabs and snug it together tight on site before fixing it to the center board of the post. Then we just cut to fit more scabs to complete the post, taking off a saw kerf at a time until it is rubber mallet tight."

What Tool Can't You Find?
I'd like to have a counter rotating tine cultivator that was bigger. The classic version is the "garden weasel". It has cast aluminum tine wheels in interlocking pairs. Most versions have 6 tine wheels in three pairs which cover about a 7" swath. It is the fastest tool for a quick cultivation of a fairly clean garden bed. It dislodges small weeds and leaves a nice broken up finish. It can level up a closed surface much better than a rake.

I want one with a dozen wheels covering about 14". More weight would be a good thing, somewhere between 5-10lbs for the head to spare some of the pushing down. And of course a nice long handle. It would be nice to have one for a wheel hoe as well.
show more
5 years ago
gear

Vinegar as an herbicide

I saw something recently suggesting the use of vinegar, dish soap (blue dawn), and salt as a spray on herbicide. I tested it out yesterday on some weeds growing in my driveway. It works! Well it works better on some things than others. It kills some broad leaf weeds really fast, queen ann's lace and many grasses resist it pretty well. The idea is to coat the leaves with this spray on a sunny, not too windy, day and the leaves become desiccated.

I've been researching the topic with internet searches. Unfortunately, most of the information out there is simply somebody repeating tips they heard somewhere else. I'm not finding much information from experienced people describing the pro's and con's. Apparently the salt is optional. Obviously a lot of salt in the soil is not a good thing. Just vinegar with 5% acetic acid and dish soap can be effective. Some people substitute vegetable oil for dish soap. And some people use lemon juice instead of vinegar. Some research suggests that high concentrations of vinegar or salt in the root zone kills roots also. But, I am not interested in using it that way.

I'm looking into a small inexpensive irrigation solution. I'm looking at buying 300' of drip tape and a few fittings. My rows are 300 ft long and generally have a different crop in each row. I figure I can just start with one line of drip tape and move it. Do people think this is a good solution?

I have city water and some small ponds. I'll probably use city water for now. My ponds are brand new and not full yet. Last year I irrigated not at all and some things like tomatoes still grew ok. Supposedly my region gets about 40" or rainfall in the average year, but last year I watched all the scattered showers blow 10 miles to the north of me and it got really dry.
show more
5 years ago
small farm 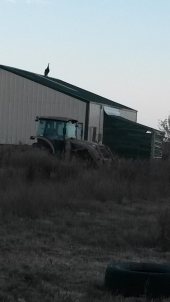 Digging a pond with a tractor
I've used a small tractor and most of the implements mentioned above on my land. But for digging a pond 40' diameter 8' deep I hired a bulldozer operator with a D4 Caterpillar to do it. I will do so again.

For really heavy work the bigger machine is really more economical. It helps to be friends with somebody who owns a bulldozer. The way to save money on bulldozer work is to be very lenient about timing. Tell the guy you want the work done sometime this summer whenever is convenient for him. He can leave the machine sitting at your place as long as he needs to. Try to work it so you minimize the cost of mobilization.
show more
5 years ago
ponds
So I went ahead and created PERMIES Coin... Anybody want some?

Alone in the Wilderness - The Story of Dick Proenneke
How did he do the roof? How did the Old Believers in Russia do their roofs?

Same principle. Easier to handle than the tires.