Update on Ethan Hughes of Possibility Alliance
Thanks so much for the update! My wife and I took our PDC at The Peace and Permaculture Center at Still Water Sanctuary/ The Possibility Alliance. We love Ethan and Sarah and are excited to hear of an update!
show more
1 year ago
intentional community

There's a chance the family and I may be heading your direction and are interested in being part of the project.

Should know within a week or two if we are moving to KC. In the process of a potential job transfer.

Glad I got on here and did some searching.

Permaculture Design - In the home


"Life is a process of continuous adjustment."

A rant it was, but a good one! Thanks.

A good point to be made, also, about adjusting our behaviors with the seasons.

Permaculture Design - In the home

Amir Salvatore wrote:Great topic. I've actually been slowly getting more into doing stuff inside. Or rather I should say, I've been starting from the inside out, since i haven't really gotten much going outside yet - mostly collecting ideas.

Not sure this is what you're looking for - but I'll give it a go.


I would say you're right on track. Lots of good stuff related to stacking functions, Thanks!

It is awesome to see this topic take off with all of the goodness every poster on here has provided.

Irene- those pictures are great. Thanks.


Over the winter I have found it more difficult to continue with some of the "permaculture in the home" stuff that is much easier in summer. For example, we have basically given up on composting, as the pile was/is frozen solid and when it is below 0 I find it a lot harder to get out and dump the bucket. (last winter we had worm compost set up in the basement, but this winter focused on creating a better living space overall.) Although I have been more likely to take the time to prep/save the food scraps for the chickens more than I do in the summer. Same with using the clothes line, it was back to the standard dryer for most things.

When the next winter begins to draw near I shall begin to set things in motion for a better design for the winter.

Has anyone else faced this "winter backlash" ?
show more
6 years ago
permaculture design
First PDC, any tips?
Hello permie friends,

I will be attending my first PDC this year and am looking for advice from those of you who have participated in one. There will be an immense amount of information to obtain and I was wondering if anyone had suggestions as to things you did to get the most from your experience.

FYI, The course will be in the second half of September at the Possibility Alliance in La Plata, Missouri.

I definitely appreciate any ideas,
Thanks!
show more
6 years ago
permaculture
FREE MONEY for Permaculture (get paid to plant stuff)
Grant,

Thanks for the reply. Whats the best way to get in touch with you to get some info regarding the Iowa specific stuff. It would be great to talk with you.

Thanks
Chris
show more
6 years ago
homestead
FREE MONEY for Permaculture (get paid to plant stuff)
Grant,
Greetings from Davenport, IA! So awesome to hear of other permaculture stuff happening in Iowa, it makes my day.

Quick question, from your experience in Iowa, are there any resources you have which are Iowa specific? I'm very interested in starting a permaculture farm/edu. center and I'm trying to get a handle on the resources out there.

On that note, do you have any experience on partnerships for land management (owner/tenant or land trusts)? If so, are you familiar with programs/grants which benefit land trusts or non-profits?

3.9 Zone and sector analysis: Design by the application of a master pattern
Hey yall, this is a great discussion, looking forward to seeing where this goes.

Here's a link to a post which goes into depth and explores the same ideas. Enjoy!!!

As a child, my father's old farm house was divided into four rooms (imagine each as a quadrant) with each room leading into the one next to it, creating a circle. My brother and I spent many of evenings running around and at time we even roller bladed!!! I've never thought of the interior design of that house from a permaculture zone perspective until now, very cool.

Garden picture exchange!
Here are a few of my favorite shots from the garden this year!!!
show more
7 years ago
art 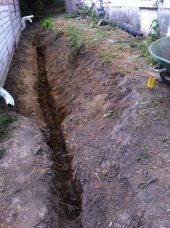 Plants for Rainwater Diversion Trench Project
Saw a few places to get it online (many of which were for food plots for wildlife) . Any resources that yall might suggest?