Hugelkultur, a breeding ground for pill bugs?
Hugelkultur beds tend to collapse internally as the wood rots down and from on top as the soil is consumed by the growing seasons and weather.

My guess based on this, is that it sounds like the rotten, woody innards of your beds have come within sniffing distance of the higher-level (insect) composters - pill bugs. Depending on your long term plans, it might be simplest to let things go as they are and make a new bed elsewhere. Or try to refurbish the bed with a thicker soil layer. Lots of other good ideas for near-term control in the thread too.

Whole Grain Bread - the search for something that is not a brick.
Dang....just realized I missed posting the recipe link I alluded to. Here it is.

While I'm at it, here's a great link to Peter Reinhart's TED talk as well as his Whole Grain Breads book on Amazon and in iTunes.

Leila Rich wrote:I burn my pots all the time, basically because I wander off and forget them

After boiling off and scraping out the really chunky bits, I add a couple of tbsp baking soda to a bit of water and boil till dry, turn down low and cook it dry for a wee while.
Pour in some water and the burnt mess (usually) lifts right off. A bit of steel wool should finish it.

I just learned about this technique - amazing in it's ability to clean a "ruined" stainess steel pan. Better than oven cleaner. Way better.

Mine is only a slight difference in process, but it might be slightly simpler and use a little less energy. Here's how I did it:

The worst pan I've handled this way was being used to make old-fashiod popcorn. The oil was being heated - on high - and it got the walk-off-and-forget-about-it treatment. LOL I think it did take three rounds of this to get it back to new-looking.

The best part about this is the chemistry that I suspect is helping with the cleaning. In a nutshell, the boiling water turns the baking soda into washing soda - all the bubbling is the CO2 being released, just like in your breads and cakes! - which is a well-known cleaning agent, but more-so in the laundry than the kitchen. I think this is only part of what makes this method so effective though.

Whole Grain Bread - the search for something that is not a brick.
For anyone interested, the best (most sandwich-bread-like) loaves I've made from my home-ground wheat were following the recipe in Peter Reinhart's Whole Grain Breads book. The method uses a Biga and Soaker - both wet-dough pre-starters - and takes about half a day to a day to ferment.

The loaf is perfect. And I mean PERFECT. (If sandwich bread is what you're looking for.)

Here's someone knocking off his recipe on their website if you wanna take a look before buying the book. (Nice rhyme!) It's a really good read if you're into whole grain baking though. Especially so if you are grinding your own and not using "whole wheat flour" from the grocery - home-ground is a different ballgame. The guy has an interesting personal story too - he's really into baking bread. Buy the book!

Using a cast iron skillet ain't so hard!
In a nutshell, here's the best guidance I can give on cast iron based on my own reading (some here!) and experience (I was not a cast iron fan for a long time).

Bacon grease is my favorite oil, by far, and I've tried a good 80-90% of the oils I've seen recommended. (It may be interesting if you don't know, but the manufacturers I'm aware of used soybean oil as their "pre-seasong" finish.)

A very small dip of my finger into the grease (small, dedicated container for cast iron seasoning) gets sufficient amount of grease to slowly, thinly (which is ideal) coat the entire pan (top, bottom, rim and handle) without overdoing it. The rate at which the fat melts off my finger onto the pan is just perfect. And the smell is much nicer than any plain oil too. Mmmm.

Further, I think the impurities naturally in the bacon grease lend themselves to a stronger finish in their final form as carbon. Last, the time and temperature of the oven can be much less this way IME. I turn the over on for 1 hour at 450ºF with the feshly coated pan in the oven cold. I shut it off after an hour and leave the pan in until cool - usually overnight. I've almost never had to repeat the bake cycle since doing it this way.

Using too much oil is extremely easy to do. For example, coating a pan with a few drips (or dime or quarter-sized spot) of vegetable oil, then wiping it down thoroughly with a clean paper towel (or three clean paper towels) is guaranteed to be way too much oil. More than likely it will run and create a thick layer somewhere inconvenient that becomes very sticky instead of drying hard.

Using too much oil can work in theory I think, but it will take an insane amount of curing time in a hot oven - maybe 24 hours or longer at 450-500ºF - to get through the long sticky-phase. Even if you don't end up with that much, it will still take you longer to finish the seasoning in the oven and require a higher temperature than if you use bacon grease as described.

If you have a pan with a finish that you're unsatisfied with, I would set you over to the max temp is will go (usually 500ºF or higher), leave the pan in there for at least an hour, maybe a few - burn the old coating down to carbon. You can wash this off and start clean with the bacon grease method. After 1 or maybe 2 seasonings it should be pretty non-stick and keep getting better with use. Keep it out of the sink religiously until it's pitch black and shiny, then it will even be able to resist light washing.

Last thought is on people's snobbishness against rough-cast iron like the Lodge stuff. I wanted a griddle for pancackes and eggs. Simply due to good availability(no other cast iron is for sale locally) I picked up the Lodge Round Griddle. If you can imagine it, that rough-cast iron griddle is now my favorite omlete pan - it was so smooth after just one seasoning and a few rounds of cooking that it works exactly like those cheesy teflon coated pans you used to see in TV commercials. If you like the extra-smooth polished pans, that's fine. But it might be your seasoning method that's keeping you from also liking rough-cast!

Using a cast iron skillet ain't so hard!
Hey, I found a group as into their spatulas (and cast iron) as I am!

The best spatula I've found is an OXO unit ("Good Grips Flexible Spatula") that has a strangely limited distribution. Even OXO's website has never shown it. One supermarket chain in my area stocks it in their kitchen gadget section - not Kohls, not Target, not Williams Sonoma, not Bed, Bath & Beyond, etc, etc. Nobody else.

After figuring out how great it was and getting worried I'd have to go without if I broke it, and how it's "barely for sale" I went back to the grocery and bought enough that I now own (and use the heck out of) four of these puppies! 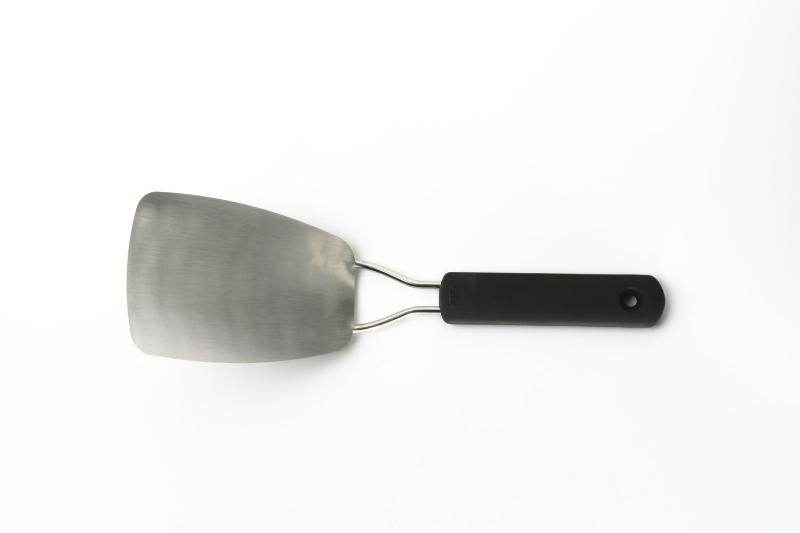 Thankfully (I just discovered) Amazon does list it. $8 and eligible for free shipping!

This flexible, stainless spatula is way more flexible than any other spatula I've seen - even more than the dedicated fish turners I've looked at.

The curve on the end of the blade combined with the superb flexibility makes it an ideal pan scraper too - both for the flat bottom and gently curved sides of frying pans or cast iron skillets.

The blade is thin enough that it's in effect it's sharp enough to cut most anything in a skillet that you'd need to. Stainless is relatively soft and it's not truly sharp though - I've never seen a scratch in my seasoned finish even from a brutal round of making ground beef into taco meat.

Also, it's not small like a cookie spatula - it's good-sized so it's very effective for omelets and pancakes, etc. (It still makes for a pretty darn good cookie spatula too, actually.)

P.S. These spatulas and my Edlund tongs are my two favorite cooking utensils. I have the 12" and 16" plain, stainless steel ones. They are by far, far the best, most universally useful and durable tongs out there. Thankfully they too are on Amazon these days. Used to be hard to find.
show more
7 years ago
cooking 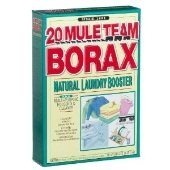 clean mold/mildew organically
Just wanted to add a couple more thoughts to the borax and bleach parts of this (excellent) thread. (Hope you guys don't mind a thread resurrection like this.)

There's nothing intrinsically more organic or even safe about either chemical. (Should we ever assume that stuff we use to kill other stuff is safe to be around or consume?!) They do have some opposing pro's and con's that make one beter in some situations vs the other.

Some facts as I see them:

Borax is mined in the larget open pit mine in the USA - nothing very organic or eco-friendly about that.

Borax leaves a residue that can be highly toxic, especially to small children or pets. A big reason that bleach is favored for disinfection of most surfaces, especially in hospitals and restaurants. This residue is ironically also one of the main benefits in using borax for something ike mold control as suggested earlier in this thread - just place it smartly!

Chlorine is made by electrolosys of common table salt and can even be made at home. Chlorine off-gases (evaporates) from solution or surface very quickly and can form harmful compounds in the air. Ironically, this quick off gassing is also one of the main benefits of using chlorine, as noted aove. Just use it with adequate ventilation! (And never mix with ammonia or other cleaning chemicals for that same toxic gas scenario already mentioned.)

Also just one more thought: someone mentioned that bleach doesn't disinfect it just breaks down colors. That is how it whitens your laundry, but it's not the whole truth by a long shot. Just ask "What is Bleach?"