Recent posts by Erika May

washing dishes: by hand vs. dishwasher
This post is totally old, so its silly to bring it back but...

I have worked in kitchens for years and I. HATE. WASHING. DISHES. I also make lots of dirty dishes...and waste lots of water washing my dishes.

And as a jeweler, my hands are devoid of moisture already. Sitting in water for 20 minutes everyday doesn't help (like I said, i dirty alot of dishes). No, I refuse to wear gloves. I hate rubber gloves.

Dishwashers for lyfe,
show more
7 years ago
alternative energy
Hand Pollinating Eggplant
Last year was my first year with eggplant. It was a beautiful black beauty eggplant that kept throwing blooms for months. I read somewhere to flick the flowers and lo and behold! lightly flicking the flowers daily gave me a sudden surge in fruit production. 60-70 % made fruit, took but a minute a day, so extra equipment to bring to the garden and remember to take back out..
show more
7 years ago
gardening for beginners

Fencing a Paddock Through the Woods
Thanks. The piggies are all trained to electric. Well...piglets are still figuring it out. Momma keeps a good 2 foot distance from the fence on the front side.

My biggest obstetrical is figuring out how to fence the terrain. I cut a path that was 70 degree angle from wood post to tree (using the tree as a brace post), then a pretty straight shot to the next tree. the fence would have to turn at another 70 degree angle for the next section. finally i could do a normal 90 degree angle to get back to the pasture but i have a 45 degree drop for about 10 feet then its flat. Premier is out of the hog net (back order)

Someone suggested to me "safe fence" poly tape. I don't see why that wouldn't keep in the pigs that are electric trained?
show more
7 years ago
gear
Raising pigs on 1-5 acres on PNW forest land possible?
yeah..if you go through 50lbs a month it might make more sense to get something that grows faster or bigger. and doesn't cost quite as much. Then you could stagger butchering from a 200 lb carcass at about 6 months (100 lbs freezer meat), a few months later get a 270 lb carcass (about 140 lbs of freezer meat), then if you don't mind growing one to a year when the gains on food to growth slow down you can have one butchered at 300 something... I don't know what is better for the woods: less animals at a larger size, or more animals of a smaller size. Also, with their small size how would they do against predators (coyotes, pumas, bears, hawks) in the area? My 500 lb momma sow is big enough to scare off most predators with her smell alone, but I wouldn't leave her piglets alone in my woods overnight until they get a good 100 lbs or more. How quickly would kunekunes reach a size that they could fend for themselves?

Also, there are different qualities of meat. My Yorkshire produces a white meat that is good for roasts...but not alot of bacon. I bred her to an old spot that makes a "red" meat that is more suited for bacon and hams. The boar's brother, when slaughtered, produced 75 lbs of bacon and two hams, but no roasts. So take into account what kind of pork you consume the most and what meat would work best for your purposes. I sold my old spot to a fellow who was raising Tamworths. Tamworths are also a nice red meat, excellent foragers and fine mothers, BUT they produce a smaller carcass with less lard. So that fellow is trying to cross in the Old Spot to increase size and lard quantity.

Skin problems in Piglets
I've got my first little of piglets. 7 healthy Yorkshire x Old Spot almost 5 weeks now running around on 3 acres of pasture. When they came out their skin was nice and white and only 3 had spots. Now everyone is getting little black/grey spots. I'm wondering if its mange, though i don't know where it could have suddenly appear from or its a zinc deficiency? the little buggers wont stand still long enough for me to get a really good look, but they don't seem thick or crusty. just....grey spots developing on everyone.

I sorta got a picture, I'll try to get some more today. any ideas? 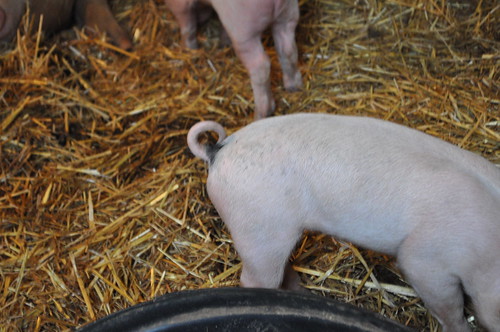 show more
7 years ago
pigs
Raising pigs on 1-5 acres on PNW forest land possible?
DANG LEW! 100 pigs on 5 acres?! I've got 13 acres in Scappoose with 10 being vertical forested acres and my piggies arn't finding much in the woods this time of year (winter). Did the quality of your forest improve overtime so that you could sustain more animals? When I bought the place I thought the pigs would love the woods here...but they seem to enjoy ripping up the pasture more. :/ hopefully after my aggressive pruning the hazelnut trees will start to produce actual nuts again and the pigs will enjoy that.
show more
7 years ago
pigs
Holistic Fiber Farm
I see no one has responded for a couple months, but I'll give it a whirl.

Up here in the PNW there are TONS of fiber farms. I don't know all of them but I am guessing that here, yes, there are people who do a mix of permaculture fiber farms. Actually, I do know one person who is doing observational permaculture and has sheep, goats, chickens, turkeys, two cows, alpacas and pigs. They are focused on being self sufficent, so the fiber they use for themselves. Yes, it can be done. You might want to concider going to the black sheep gathering in Eugene in June. There are farmers there showing their animals (and fleeces) who you could talk to...at the very least its a real blast if fiber is your thing.

People mix animals, especially llamas and alpacas into sheep herds. One or two can work as good guard animals, but too many and they form a flock of their own and don't care about the sheep.

I would say it is best done by starting with one or two species, then slowly adding new animals once you learn how those specific animals live and thrive. Really its important to really learn how your animals communicate.

some suggestions:
When my niece got rabbits she started adding their (paper) litter to the compost. The compost suddenly was filled with grubs. If you have chickens, rabbit litter in the compost will make you alot of extra feed.
chickens and pigs can rotationally follow sheep and cows picking out undigested grain from their, uh, refuse.
I've heard of people spinning highland cattle "wool"....dont know how soft it is, but it might work as a multi-purpose breed for you
Get a hardy breed of sheep. I had Jacobs last year and they were a breeze. This year I have dairy sheep and they are ok....but not as hardy. They DEMAND GRAIN BECAUSE OMG THERE IS NOTHING ELSE TO EAT, whereas the Jacobs could still find something to eat in the winter. "Older" breeds of sheep have better ability to forage, be self sufficient and lamb without complications.

Fencing a Paddock Through the Woods
So I have about a 1/2 acre of pasture I want to reclaim from the woods. I have 13 acres...but 10 of them are north facing vertical woods so every foot of pasture counts. This particular section is mostly young, fruitless hazelnuts, vinemaple, ferns and underbrush with a few stately firs, cedars and a big leaf maple. This is one of the flatter sections that could be "pasturized," but its not totally flat. So yesterday I bushwacked around trying to figure out where to place my fence and I have a clear shot from big tree to big tree using them as main posts because, as it turns out, the name of my town means 'Gravely Plains" and...yeah, its hard to drive large posts into that ground.

SO question being: What kind of fencing would you use on rough terrain to keep in first pigs, then sheep? I am sort of inclined to continue with the New Zealand high tension fencing someone started in the front because I could deal with differences in ground height a little better....but can it keep its tension on a slow curve, or does it have to be straight? Then there is the problem of it shorting out when the grass hits it.

Other option is field fencing, but again, how well can two smaller ladies stretch it on varying degrees of slope in a spot where you can't bring in power tools? Then again, it wont short out.

show more
7 years ago
gear
Rebirth/regeneration of old pasture
One more suggestion: maybe you could rent that pasture to a farmer who is looking for a place to run their animals for a season, or rent a farmers animals. Some folks set up their own fences and it wouldn't be a worry for you to deal with. Let them take care of it!

I found a goat off craigslist I will be rehoming for a few months while goat's family gets moved and resettled. Won't need to pay for him, he's just gonna visit for a while, do some work then go on to live with his family again. There are lost of people around who need temporary placement for their animals while they move or deal with family stuff. You may be able to help someone out, but make sure you stipulate you need them to set everything up and draw out what work you are willing to do and not willing to do.
show more
7 years ago
woodland