freezer wofati
I think, perhaps that this thread is almost completely missing the physics of the PAHS that is described in Hait's book.

Specifically, the "deep earth" temperature isn't constant, and can be altered (by things we do) for an annual effect.  Most of the examples in the book are showing how to warm up enough mass under the umbrella to work with the slow thermal migration and create a long-term/annual temperature that is higher than the lower temps in the winter, but the concepts should still be sound and equally apply to doing the opposite.

For example, if one follows the "coolth" design plan, it encourages heat to escape during the colder months, and thereby cooling the same thermal mass under the umbrella that was previously being warmed for annual storage, and the overall effect, is that all that earth that you're worrying about warming the freezer from below (and on the sides if it's highly bermed), are actually the "coolth" storage for the year, and needs to be thermally coupled with the cold winter air as often as possible, so it can store up the "coolth" enough to last until the next winter.

The reason for angling the cooling tubes up, is to allow them to work opposite of what they'd do for a warmth storage system, and do so passively.

The thermal mass is NOT the enemy, it is the engine that should drive this luxury sports car in grand style!

You probably need to have a huge amount of air/heat flow through there in winter, and in the summer, the vents can probably be reduced in flow, just to provide any minimum ventilation, so as to prevent suffocation or stagnation, but the real work is the freezing the thermal mass (all of it) under the umbrella, and if it won't last all year, then you needed either more thermal mass, or colder winter temperatures, or greater winter heat exchange.

I'd like to add, even in a true PAHS home, it's not expected to reach its stable temperature passively for about 5 years, and prior to that, it will probably be somewhat cold in the winters.  The difference is with a home, the occupants will often speed that process up, by adding heat of a "non-passive" means, to improve their creature comforts and survivability, which is harder and/or more expensive to do with a freezer design.  I don't know if the 5-year wait to get it to store ice cream properly, is worth it to many folks?

In the short-term, it can at least start out as seasonal storage, but probably won't even start to be useful as a freezer, even for seasonal use in the first winter, unless it's a pretty cold one, and year-by-year, the temps should creep downward, and stabilize after about 5 years.  The only way I can think of, to quicken this process, is to massively increase the winter air-flow and thus the winter thermal exchange/exhaust - kind of the opposite of running the cast-iron stove in the winters to stay warm for a few years, until the building is storing enough heat to remain comfortable without it - but much like not running the cast-iron stove in the summer as much as possible to avoid unwanted heating, you wouldn't want to run your really big vents to your freezer in the summer either.  Presumably, after 5 years or so, you won't even need to run larger vents in the winter either?

show more
3 months ago
wheaton laboratories
"Water Mass" RMH
The 2nd post in the thread brought it up, but it is Aerated Autoclaved Concrete.

Concrete that has been cured with lots and lots of bubbles inside it for air pockets and it does make for much lighter weight than normal concrete, and much less thermal mass. It is also structurally not nearly as strong as normal concrete, although a RMH isn't normally a structural member.
show more
7 years ago
rocket mass heaters
RMH vs Masonry Heaters
If I recall correctly, every MH design I've looked at has provision for a secondary air intake to assist with a secondary burn of the exhaust gasses, although I won't promise that this is the norm, 'cause I haven't been able to look at all of the designs.

And yes, they are much more expensive.
show more
7 years ago
wood burning stoves
"Water Mass" RMH
Do NOT use AAC for your RMH!

You actually NEED the large thermal mass to make the most of your RMS, you don't want insulation there. Use the insulation on the outside walls of your house, but keep the large mass on the inside, to store heat.

If you were to use AAC, you'd find that your RMS didn't store nearly as much heat as the design promised, and you'd need to burn much more frequently, & use much more wood.
show more
7 years ago
rocket mass heaters

Rocket Stove Steam for Turbine
This isn't going to work, and any restrictions in the flow of your Rocket Mass heater exhaust will backfire, or at least smoke you out - best not to do it.

The reason it won't work is because a conservation of energy principal - you can't get energy that isn't there. Your exhaust has very little remaining energy in it by the time you get it out, because the RMH is so much more efficient in the use of the energy stored in your fuel (wood). Most of that energy has already been converted into heat, and stored in your "Mass", with little left over to do much else.

Have you looked at how much energy you'd really need for your electrical uses? You may be shocked, if you converted the remaining energy in your exhaust to a common unit, and compared what you would like to use with what is actually available in the exhaust.

Probably best to look to a hybrid combo of solar & traditional wind turbines for electricity, unless you wish to be running a RMS-powered boiler to generate higher energy steam, which is probably much less efficient than just putting up a windmill.
show more
7 years ago
wind 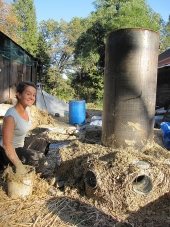 rocket mass floor heater -- finally completed and it works!
(I know this thread is old, but hope springs eternal...)

To the couple who did the floor heating system for the yurt, are you still using it, and have you experienced any issues with condensation collecting in your exhaust pipes?

I'm considering similar, but the engineer in me keeps warning that this is essentially a condensing heating system, and as such, is likely to collect moisture if it isn't given a place to drain away.
show more
7 years ago
rocket mass heaters