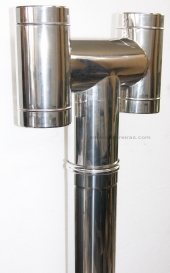 smoke back after 1 hour of burning
I am also struggling with the pressure issue. As long flames are visible, i have a nice draft and sucking sound. After a few minutes of mere smoldering it smokes back. Already rebuilt 3 times, minor fixes not counted. By first and second version (now seen as mock ups only) was the heat riser too narrow (4"), making it longer (from 30 to 39") and raising the barrel accordingly didn't help either. I was thinking also, the internal heat riser enclosure drum, as per the Ewans book is too big, restricting flow. So i tore down everything, took more flue pipe and made a 6" diameter, 63" heat riser with bricks on 4 sides, the 200L barrel standing quite high up, on a waist high brick edge. Heat riser top end to barrel gap measured very meticulously, in the current version first 1,5", now increased to just over 2". It was needed, as it seems to me the upper end of the barrel tends to bulge in when hot. The vertical burning channel is now 20" long and 12cm by 12.5cm (23.25sq.in), and want to keep it that way.
What worries me most is the possibly inproper heat balance and the whole chunk of material having the same temp inside the barrel (no shock drop in gas temperature). The insulation in the top half of the heat riser is only 1" clay-perlite with that masonry enclosure (bricks standing on their side, after the first experience i was worrying over spacing toward outer barel). The 20 foot long 6" flue pipe was barely getting hand warm in mid section, so i took out 2x 90deg elbows and 8 foot of the piping. That helped somewhat on the overall function.
As still no foolproof firing possible, i want now to take out the perite clay insulation, tear down the whole heat riser, replace the outer enclosure with a 12"diameter and 68" long pipe from the scrapyard. The inside of the heat riser will remain the 63" long 6" flue pipe. The insulation will be dry (no clay added) perlite, to my calculation the remaining 100L bag will fill the space up. I also want to make a fresh air intake channel, because it needs now a close-by window being open finger wide to have decent burning.
I have made photos from all steps, including the dead ends.
show more
7 years ago
rocket mass heaters

Four Rocket Mass Heater Questions
hi all
got hold of a 23" by 28" L shaped metal tube, that i intend to work up as a heat riser. i know it is unusable in this shape, but i would like to keep the elbow section, if possible.
http://img145.imageshack.us/img145/4669/riserpipe.jpg
can somebody tell, how much of the burn channel i can replace with metal tube? i know the vertical section between feed hole and heat riser needs to be with the smallest cross section of all. so i intend to fill up the vertical channel to 1/3 with clay, flush with the brick section of the burning channel. of course the entire burning channel+riser will be embedded into perlite-clay.
i also think on an oil dripping appliance, that would let fall spent oil by rate of 1-2 drops/min into the throat of the heat riser.
for that i want to make a tapered socket at the right position into the top of the 55 gal barrel.
show more
8 years ago
wood burning stoves

Rocket Stove Water Heater
hello, i am a complete newbie, but with all intention to build a mass heater into our basement. i had in mind to use a woodstove, so i bought one a while ago, and also a 6" diameter twin water jacket (4 connector) heat exchanger plus a 200L puffer tank. the woodstove will wait, or i sell it as newer used, and i go with the rocket mass heater instead. my question for this topic, do i need to use the heat exchanger standing upright to utilize water circulation without a pump to the heat puffer tank. http://en.wikipedia.org/wiki/Thermosiphon
i intend to lay the exchanger horizontally at ground level and the water tank standing nearby, or possibly elevated by 1 foot to help the flow. i as calculate, with upright mounted exchanger i need a few more 90 deg corner pieces for the exhaust pipe.
thanks, gm.
show more
8 years ago
rocket stoves