Governor of Ehime Prefecture declared EM as a prefectural policy. He allocated supplementary budget and personnel to act on his policy. This Governor persuaded Governor of Hiroshima Prefecture to begin his prefectural application of EM. Furthermore, through the efforts of Ehime Governor, the prefectural Governors of Hyogo, Nara, and Wakayama have shown understanding of this movement. Now the future of Seto Inland Sea is secured.

As an introduction, I think the mix is basically some yoghurt and natto spores.

I wondered if Fukuoka ever mentioned Mokichi Okada and his school which is usually called 'Nature Farming' or Kyusei?

I can see the big difference but I wondered if there had been any interaction between the two of them?

I know it is way 'off topic' and in the opposite direction for Fukuoka's style but Kyusei and the use of "Effective Microrganisms" or EM Technology for conventional organic farming is far more common even in Ehime.
show more
9 years ago
masanobu fukuoka 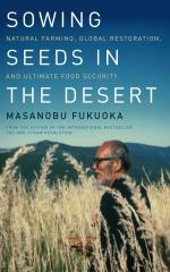 paul wheaton wrote:I skip over the stuff that doesn't follow the naming convention.

Oh ... was that me? I was going to suggest donating one to the Fukuoka family so they could keep it for foreign visitors and to encourage them by how well respected the old man is.

BTW, I had one comment to make about the podcast. I seem to remember in it a big thing is made of Fukuoka taking two crops out of his fields. I just wanted to say this is quite traditional at least in the Iyo area and goes back a long way before industrial farming.

They say the area in which Fukuoka lived was the first in Japan to be cultivated in that typically square patchwork you see everywhere. (I don't know this to be true but I have heard it said).

Fukuoka's Farm - can I visit it, or one like it?
Ha ... the pain of artifical beauty. Nature contained in concrete 'tank trap' irrigation drains, hemmed in and ordered like the people.