i need good pictures of hugelkultur beds for an article i'm writing
In response to Cassie's email request for more photos, I'll give this a try.

Ancestral Parenting
I'm happy to see this conversation come up here. I feel I am in two different movements at times, the natural/instinctive parenting one, and the permaculture one. Why shouldn't they be the same world? So this is great.?
Some really great resources have been mentioned in this thread.

I want to mention that Sally Fallon's book about babies has been criticized by many in the natural parenting community for its bias. I was in the WAPF camp for a while, but I became outraged at Sally Fallon's anti-breastfeeding position. She denies being anti-breastfeeding but her overall position clearly has the impact of being so. Fallon is a dairy farmer and heavily promotes a homemade formula using raw cow milk and raw cow liver for babies which La Leche League points out is highly problematic. In contrast, the ancestral way of handling a situation where a mother is having trouble breastfeeding was other mothers in the community would breastfeed the baby (modern application of this is through peer-to-peer milksharing networks like HM4HB on Facebook.)

Fallon puts forth in her book and elsewhere that any mother who does not eat a ridiculously impossible "nutrient rich" diet (which includes way more food than anyone I know would eat in a day and most of it not readily available) has substandard breastmilk and then a baby would be better off with her cow milk formula. Her book just her view on baby raising and has no basis in the science of attachment or biological evolution/ anthropology or anything other than her own opinion. To be fair, I believe that her own opinion is perfectly fine for her own choices but not fine to put in a book and press onto other people.

For prenatal diet and preparation, I recommend instead Chris Kresser's program The Healthy Baby Code, which is based on an ancestral (paleo) diet. I find the paleo diet more in line with polyculture by the way.

show more
5 years ago
ancestral skills
2 weeks long enough to establish forest garden?
Hi Aaron. I just wanted to ask if there are people near the property that you could build a partnership with? Perhaps someone who would want to use the land and steward it for you during these two years, who understands and supports your long-term goals? If you are planning to eventually move to this property, it will be very beneficial to have started to build a community. I do not know about Ireland, or the area where you are looking to buy, but in many parts of the world there are a lot of people who want to grow food who do not have access to land. You could stack functions by working on social permaculture while the land would benefit as well.
show more
5 years ago
forest garden 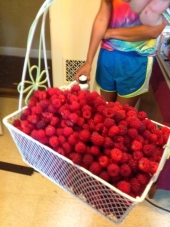 Treetops Permaculture - Stamford, CT
Hi Sam, I know you've moved on to a new project but it would be great if you could post an update of how this looked at the end of your time there..
show more
5 years ago
projects
"Fall is for Planting" True? or marketing?
Is it really true that fall is the best time to plant shrubs and trees? A gardener friend of mine was strongly discouraging me from buying and planting bushes now, he was saying that the "fall is for planting" line was simply marketing by nurseries because they need sales.
show more
6 years ago
gardening for beginners